This weekend Nosh Kitchen Bar opened up in the space previously occupied by the White Heart. I always think Portland is at its restaurant saturation point, so I'm skeptical of new restaurants, but Nosh really seems to be a different type of bar/restaurant from all the others we have here in Portland.  The bar scene has been dominated by Irish pubs, sports bars, and snotty martini bars for too long.  Nosh feels upscale, casual, and cool.  It was busy and noisy but in a good way, in a way that made it feel exciting.  I also really appreciated the lighting.  Instead of the "too dark to see the person next to you mood lighting" at most bars, it was bright and alive.  It's a testament to how Nosh walks the line between bar and restaurant that I actually felt the atmosphere was important enough to spend so much time on before getting to the food!

So the important part: the food.  It was good enough to warrant the use of expletives.  Really, I thought about it and I feel I have to say of the pork-belly Reuben: it was really fucking good.  Half inch thick slices of house cured pork belly saturated with melted cheddar cheese and caramelized onions on mild rye toast.  yeah, expletive worthy is right.  the pork belly wasn't over the top thanks to the sweetness of the onions and the taste of the rye bread.  The fried grease sliding down my gullet was pretty divine.  I had some of their tasty house made sea salt and vinegar fries dipped in Mayo as well.  Then I called in re-enforcements in the form of Philippe, got a table and got to business.  I ordered a full order of their buffalo wings, tempura fried bacon, more fries, and and order of Jamon Iberico.  The menu is impressively deep.  Usually there are a couple things that jump out and you can quickly figure out what to eat.  Not so here.  If you like deli food and cured meats you're going to have a hard time deciding what you want off this diverse double sided menu.  So order the tempura fried bacon while you reflect on it!  The bacon is thick cut, house cured, dipped in tempura batter, and then drizzled in honey.  It's amazing.  I will preface my take on the wings by saying I don't normally like wings.  I like fried batter as much as the next guy, but if you tell me it's chicken I want their to be some chicken there too.  So the wings at Nosh are more my type of wings.  They're encased in crispy fried goodness but inside they're real chicken wings with a good amount of meat that hasn't had the flavor over-cooked right out of it.

So I was impressed and will be back soon.  It was a soft opening, so they're still finding their rhythm, and I ordered the stuff the bar tender told me to order so I assume it was some of their best stuff.  But they're off to a great start.  I'm glad that Portland has a cool late night bar like this.

Now off to the indoor rowing championships.  Hopefully my arteries haven't clogged shut.

When people find out I'm a wine distributor the response is usually "Oh, that sounds like so much fun!" or something like that.  I often try to set them straight by talking about putting stickers on bottles in my warehouse or some such thing like that, but there really are some great perks to this job.  Last night I enjoyed a big one when I got to attend Solo Bistro's private debut of their new menu, created by their new Chef: Tyne Sansom.  Tyne returns to Solo, having cooked there as the Sous chef to Esau Crosby before moving on to become the chef at the Main dining room of the Harraseekitt.  Now back at Solo and in charge, he's moved the menu firmly to the cutting edge of Maine cuisine and taken their already dedicated use of local produce to a new level.

As soon as I saw Charcuterie egg rolls on the menu I knew I was getting them.  The egg rolls are filled with duck confit, pork belly that Tyne cures himself, and a bit a cabbage.  Tyne is making the egg pasta for the casings himself and his personal passion and investment showed through in the balanced flavors of the gamey duck and meaty pork belly.  The egg rolls are served with the killer addition of fig paste and tamari jam.  I also got to try the Wild Mushrooms on Brioche toast which was a classic flavor combination.  The delicacy of the sauteed wild mushrooms was set off by the richness of the brioche.  And I snagged a bite of Lion Stout and Molasses braised short rib, which was so tender it came apart when I looked at it.

The main course I tried was a roasted Butternut squash risotto.  The rice was rich and creamy, tied together with asiago and romano cheese.  I was impressed how bright the risotto was; there was the right amount of cheese to make it creamy and gooey, without being heavy or too dense.  That allowed the Butternut squash to become the primary flavor.  The fresh sweet flavor of the squash brightened the dish and made it a lighter risotto that satisfied me with out weighing me down.  I also tried the Vegan Winter Vegetable Pie.  I'm always suspicious of vegan cooking, but this pie was rich and hearty.  The slight sweetness of the parsnips married well with the potato and mushrooms in it.  I was particularly impressed by the crust of the pie too.  Vegan baking can be tricky, but this was flakey and tasty, just what it should be.

I'm impressed by the new menu and look forward to going back soon and seeing how things evolve.  Making your menu this local and seasonal is obviously hard in ME but Tyne is off to a great start and is genuinely passionate about what he's doing.

You can see the menu on Solo's website here:  http://solobistro.com/menus.htm 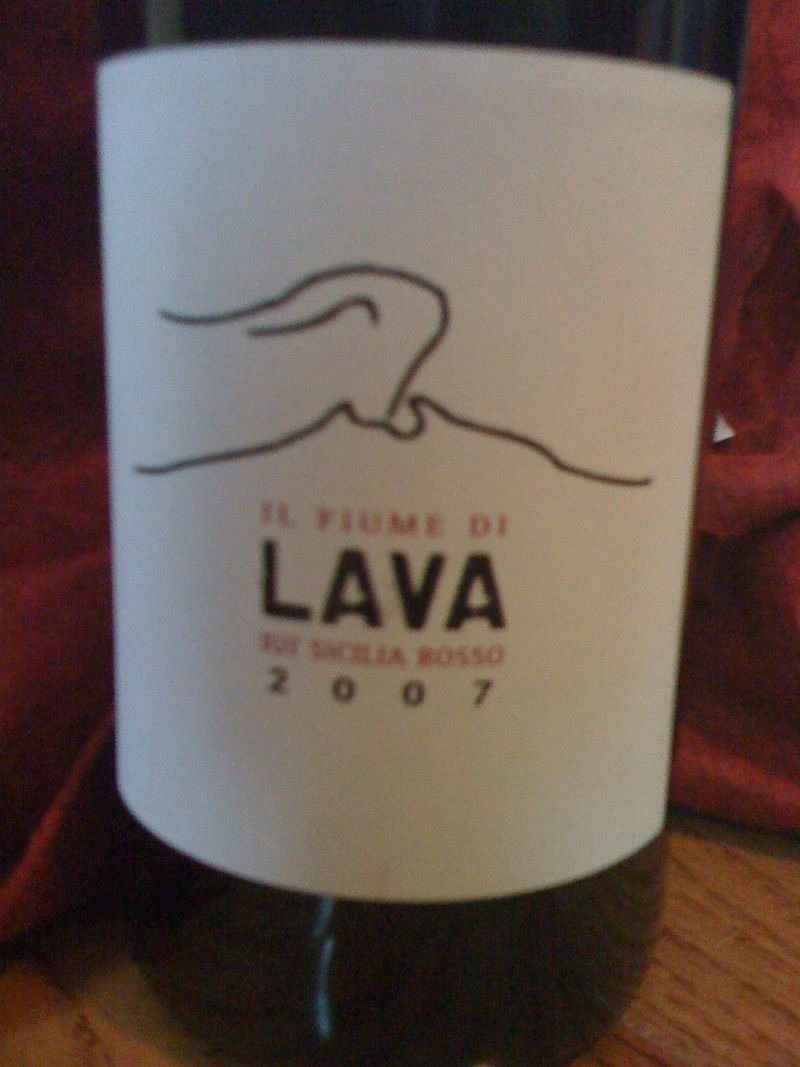 Background: This pure Petit Verdot comes from the Passopiciaro vineyard owned by Andrea Franchetti.  Franchetti has a reputation as one of the top producers of Bordeaux varietal wines in Tuscany and this new estate in Sicily is quickly earning it's own reputation.  That's right, this wine is 100% Petite Verdot from a vineyard planted in an old lave flow 3300 ft above sea level.  Franchetti seems to make a habit of ignoring all traditions and accepted knowledge of what grape types should be grown where, often with spectacular results.

Profile:  Petite Verdot is often used as a blending grape to give Bordeaux wines deeper color.  As uch this wine is purple.  It coats the glass with a purple tint.  The aroma is inviting and pretty powerful. The quality of the aroma is very fine; it's not rustic, yet it's filled with flavors I associate with rustic wines.  Pencil shavings and graphite, dried tobacco, raspberry pie, roses, a hint of mint.  This is a very complex, fine nose.

On the palate the wine is dense and packed with dark cherry/raspberry fruit that builds slowly into it's big mid-palate.  It has great supple black pepper tones that come out under the fruit.  The tannins are polished to the point that I would call them volutptious and play a supporting role to the fruit and spice.

This wine is hard for me to classify or compare to other more known types.  It's powerful and focused, yet very refined and smooth.  Almost like a superb modern Merlot based Bordeaux, but the flavors are Unique because it's Petite Verdot.  I can say confidantly this wine is worth more than the approximately $40 it retails for.  Available at Browne Trading.