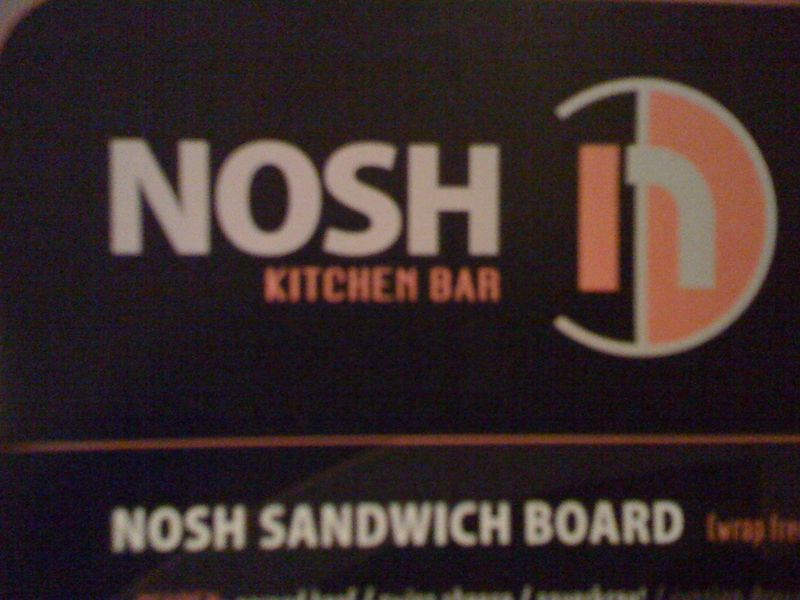 This weekend Nosh Kitchen Bar opened up in the space previously occupied by the White Heart. I always think Portland is at its restaurant saturation point, so I'm skeptical of new restaurants, but Nosh really seems to be a different type of bar/restaurant from all the others we have here in Portland.  The bar scene has been dominated by Irish pubs, sports bars, and snotty martini bars for too long.  Nosh feels upscale, casual, and cool.  It was busy and noisy but in a good way, in a way that made it feel exciting.  I also really appreciated the lighting.  Instead of the "too dark to see the person next to you mood lighting" at most bars, it was bright and alive.  It's a testament to how Nosh walks the line between bar and restaurant that I actually felt the atmosphere was important enough to spend so much time on before getting to the food!

So the important part: the food.  It was good enough to warrant the use of expletives.  Really, I thought about it and I feel I have to say of the pork-belly Reuben: it was really fucking good.  Half inch thick slices of house cured pork belly saturated with melted cheddar cheese and caramelized onions on mild rye toast.  yeah, expletive worthy is right.  the pork belly wasn't over the top thanks to the sweetness of the onions and the taste of the rye bread.  The fried grease sliding down my gullet was pretty divine.  I had some of their tasty house made sea salt and vinegar fries dipped in Mayo as well.  Then I called in re-enforcements in the form of Philippe, got a table and got to business.  I ordered a full order of their buffalo wings, tempura fried bacon, more fries, and and order of Jamon Iberico.  The menu is impressively deep.  Usually there are a couple things that jump out and you can quickly figure out what to eat.  Not so here.  If you like deli food and cured meats you're going to have a hard time deciding what you want off this diverse double sided menu.  So order the tempura fried bacon while you reflect on it!  The bacon is thick cut, house cured, dipped in tempura batter, and then drizzled in honey.  It's amazing.  I will preface my take on the wings by saying I don't normally like wings.  I like fried batter as much as the next guy, but if you tell me it's chicken I want their to be some chicken there too.  So the wings at Nosh are more my type of wings.  They're encased in crispy fried goodness but inside they're real chicken wings with a good amount of meat that hasn't had the flavor over-cooked right out of it.

So I was impressed and will be back soon.  It was a soft opening, so they're still finding their rhythm, and I ordered the stuff the bar tender told me to order so I assume it was some of their best stuff.  But they're off to a great start.  I'm glad that Portland has a cool late night bar like this.

Now off to the indoor rowing championships.  Hopefully my arteries haven't clogged shut.

Hello I love your article is very good ... should put more information about this topic