Interesting little wine, this.  Hippodrome Ventoux Rouge is a one off wine made by Marc Pichon in Ventoux for T Edward wines in Manhattan.  Marc bought an old vineyard in the Ventoux region and has been rebuilding it and transitioning to organic agriculture under his own brand: Anne Pichon.  So this wine, Hippodrome, was made by him exclusively for T Edward and they bought it all.  Then they started looking at their warehousing costs for these 1000 cases of wine they had and decided to just move it on.  So I got a really good day on a bunch of cases and it's available around southern Maine for a limited time.

I don't know for sure, but I'll bet $5 the wine is primarily Grenache with a bit of Syrah blended in.  All I've read about Marc's wine making emphasizes organic practices and slow gentle handling.  For whatever reason, this really has a slow gentle quality to the taste.  It has the bright vibrant raspberry fruit and floral rose aroma that I associate with Ventoux, but it's smoother than most Ventoux I've tasted.  It has some nice hints of pepper on the mid palate and some soft slightly dry tannins on the finish, but overall very integrated.  And it's 12% alcohol!  Not too heavy as a result and a bit more balanced seeming.  At the greatly discounted price of $11.99 I enjoy this a lot.  It's a perfect lighter rhone gateway fall wine.  The weather's still warm and there's plenty of time to drink Bordeaux, Gigondas, and Cahors in the months to come.  This Ventoux is perfect for now.

Available at Freeport Cheese and Wine, the Rosemont Markets in Portland, and Down East Beverage on Commercial St in Portland for approximately $11.99 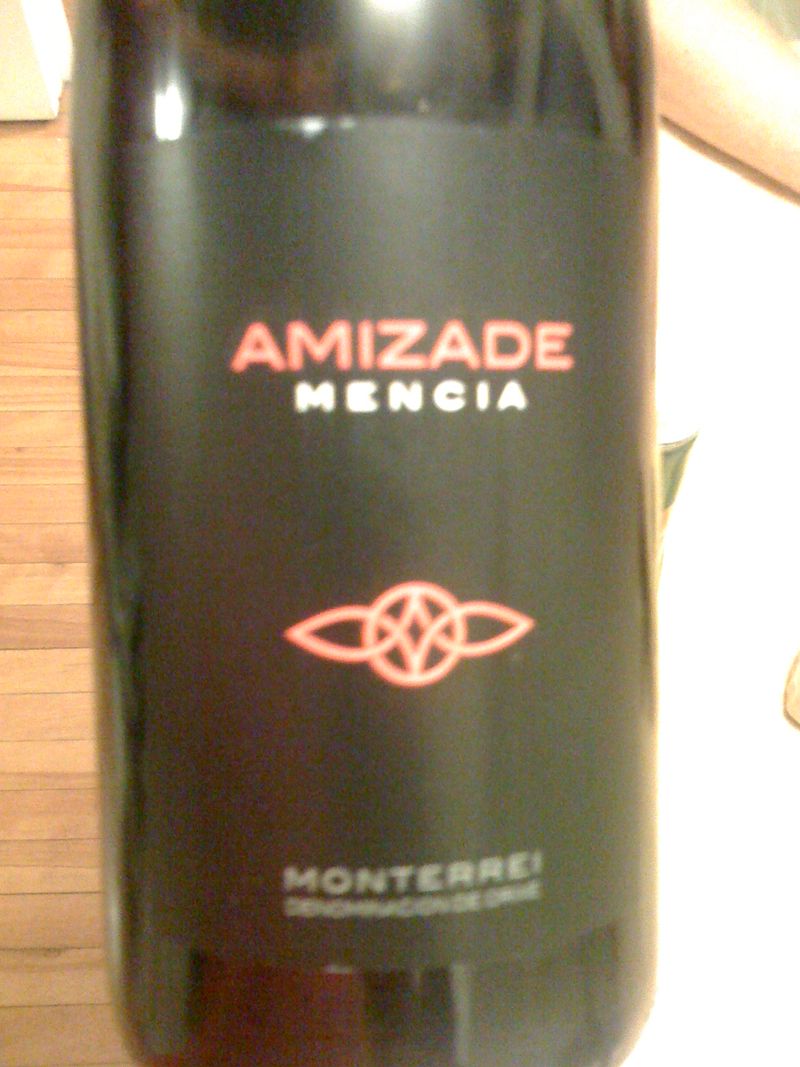 You all know I love Galician wines and I've been slowly getting more turned on to Mencia.  It's not too surprising really; in taste profile Mencia has some similarities to Cabernet Franc, one of my favorite grapes.

Aroma: This reminds me a bit of Cru Beaujolais, but it's more intense.  The aroma has some really intense, fresh, raspberry and black cherry to it; very juicy.  Underneath the fruit I can also pick out hints of fresh cut grass, smoke, and fresh mint.

Palate: This is a really intrigueing wine.  One of those wines that when I take a sip, it's so engaging and interesting that I immedeatly go back for another sip.  It's a unique, enjoyable combination of very smooth texture, very vivid raspberry/blueberry fruit, bright brilliant young acidity, and a touch of black pepper and tannin.  The flavor on the very finish that lingers on reminds me of cooked blueberries.  I really wish I had had this is the summer.  It's so poliched and sauve, yet precocious and playful at the same time!  I really just can't stop drinking this it's so lively, vivid, and refreshing.

Amizade is a new project created by Gerardo Mendez of Do Ferreiro, one of the most respected and sought after producers in Rias Baixas.  Amizade is the word for "friendship" in the local language: Gallega.  Gerardo really knows what he's doing in the vineyard and is a very hands on passionate wine maker.  As such, the grapes for this wine are farmed with organic agriculture, hand harvested, and fermented with natural yeast.  Monterrei, the DO that this comes from is the most inland and isolated of Galicias DOs.  It is located in the valleys along the border of Portugal.  Almost all wine production here is white, so I'm particularly happy to have gotten my hands on this excellent Mencia.

I'm just back from a fantastic Galician dinner at Caiola's and I don't know where to begin.  Chef Abbie really went all out on the dinner.  I presented five wines: one Basque and four from the different regions of Galicia, but we had 6-7 courses of very authentic Galician cuisine.  More and more food kept coming out until it was overwhelming; that really took me right back to my expiriences in Ribeiro last year. 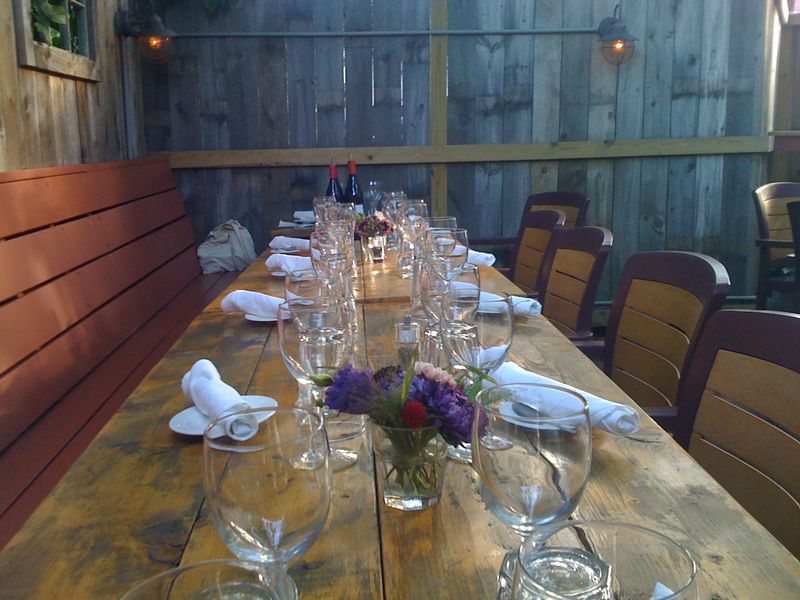 The table set and ready to go!

Chef Abbie spent a lot of time researching Galician cuisine and imported some specialties from the region, such as Pedron peppers, tetilla cheese, and pork from the black footed Galician pigs. We had some good talks about Galician cuisine and food culture leading up to this and the dinner brought back a lot of fond memories of when I was there last year. 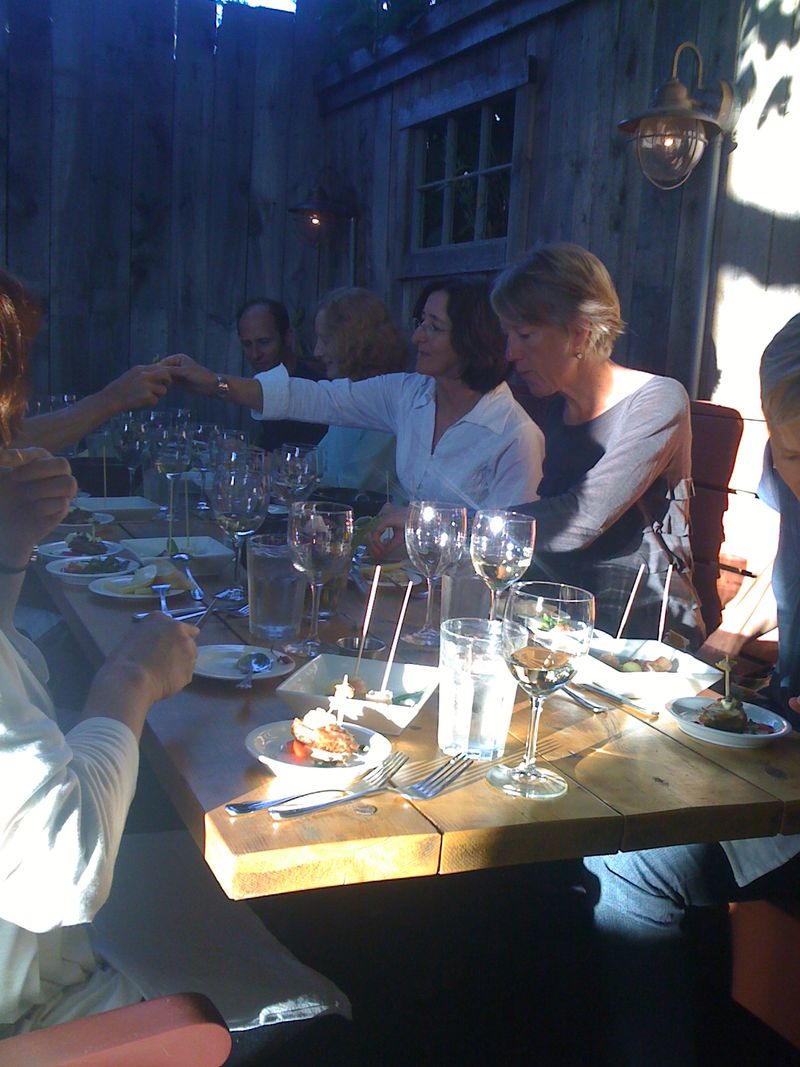 The dinner was amazing (thanks to Chef Abbie and her passion)

The wines were incredibly vibrant and really demonstrated why Galicia is one of the hottest (excitement wise) and terroir driven of all Spain's regions.

The wines we presented were:

One of my favorites was Vina Mein was an excellent complex white from the DO of Ribeiro.  The old vines, decaying granite, and low yields create a really vibrant white up front with citrus and minerality followed by a dense smooth finish.  The combination of these flavors really threw some people for a loop, but were extremely tasty; like some loire whites! 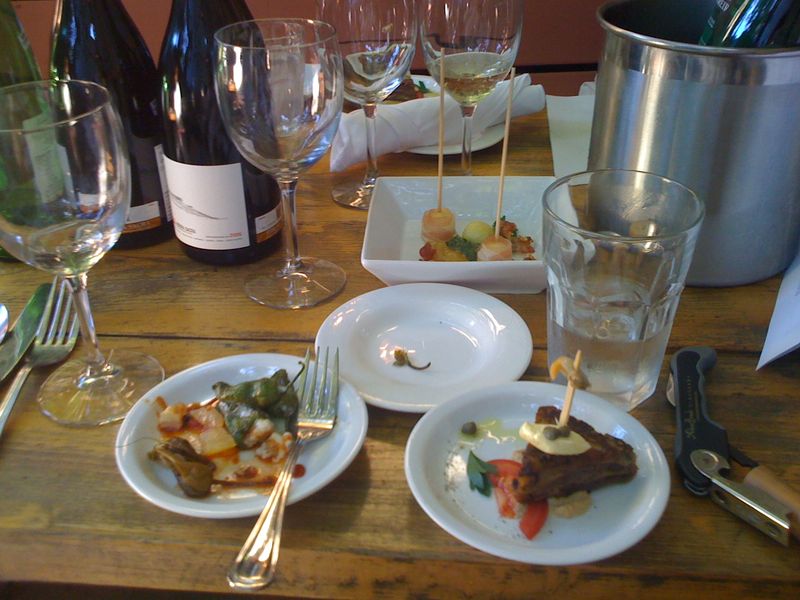 Here's some of the amazing food Abbie turned out.  This was a layered baked potato slice on the right, pickled and preserved spicy peppers, and a dish of melon wrapped in serrano ham! 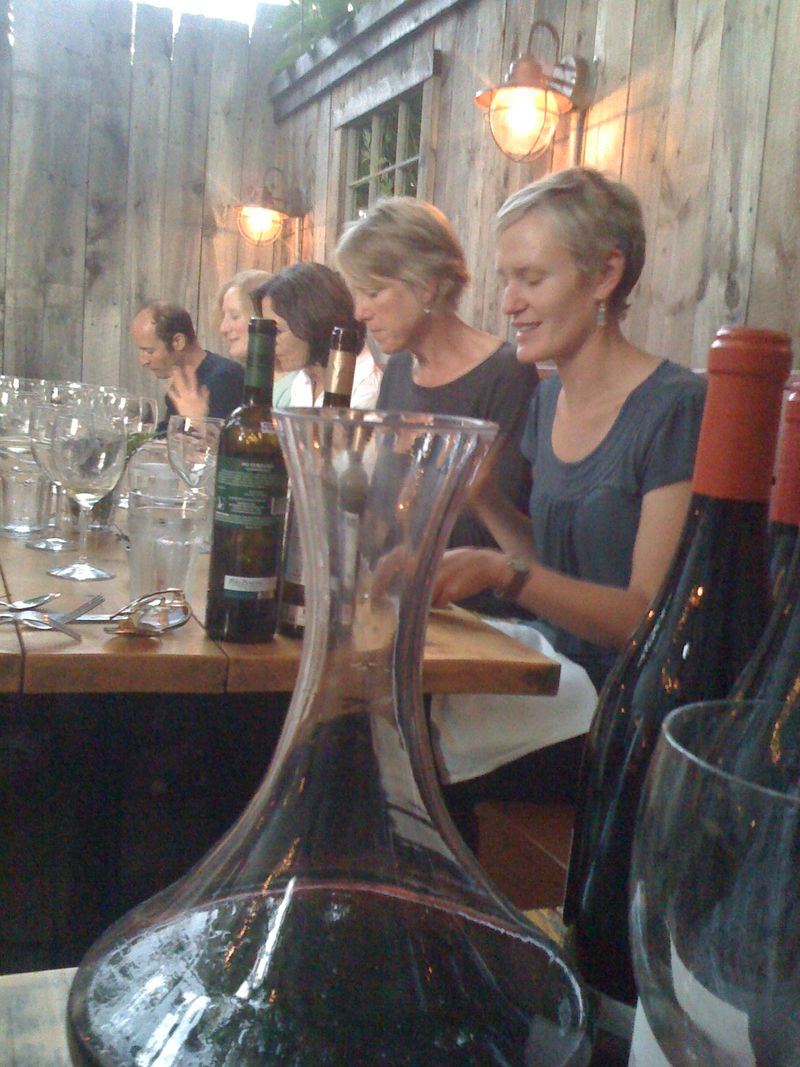 Wine making is pretty traditional in Galicia.  Lots of small family producers making wine that is just consumed in the locality.  And because of the distinct culture here and the mountains that separate the region from the rest of the country; the wine culture is totally different.  Galicia never really replaced it's traditional grapes after phyloxera as other regions did.  Many vineyards in the rest of Spain were replanted with alicante and palomino, but Galicia stayed true to it's heritage.  From Do Ferreiro to Vina Mein, and Dominoio do Bibei to D Ventura the wines were all extremely deep and complex as well as very unique. 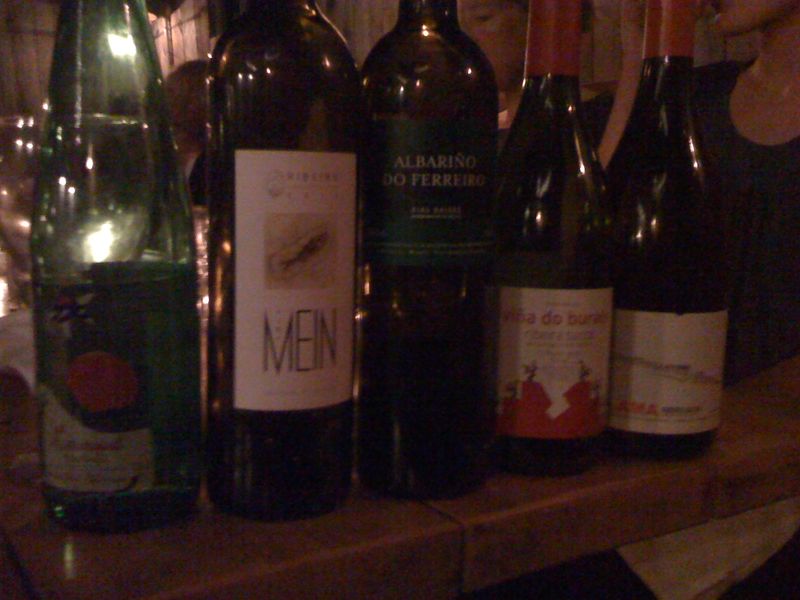 In my opinion some of the most exciting wine and food in Spain comes from Galicia.  I'll post tasting notes on Dominio do Bibei and vina Mein soon.  These are some of the most authentic, terroir driven wines I've had over the course of the year.  Very worth the hunt to find them. 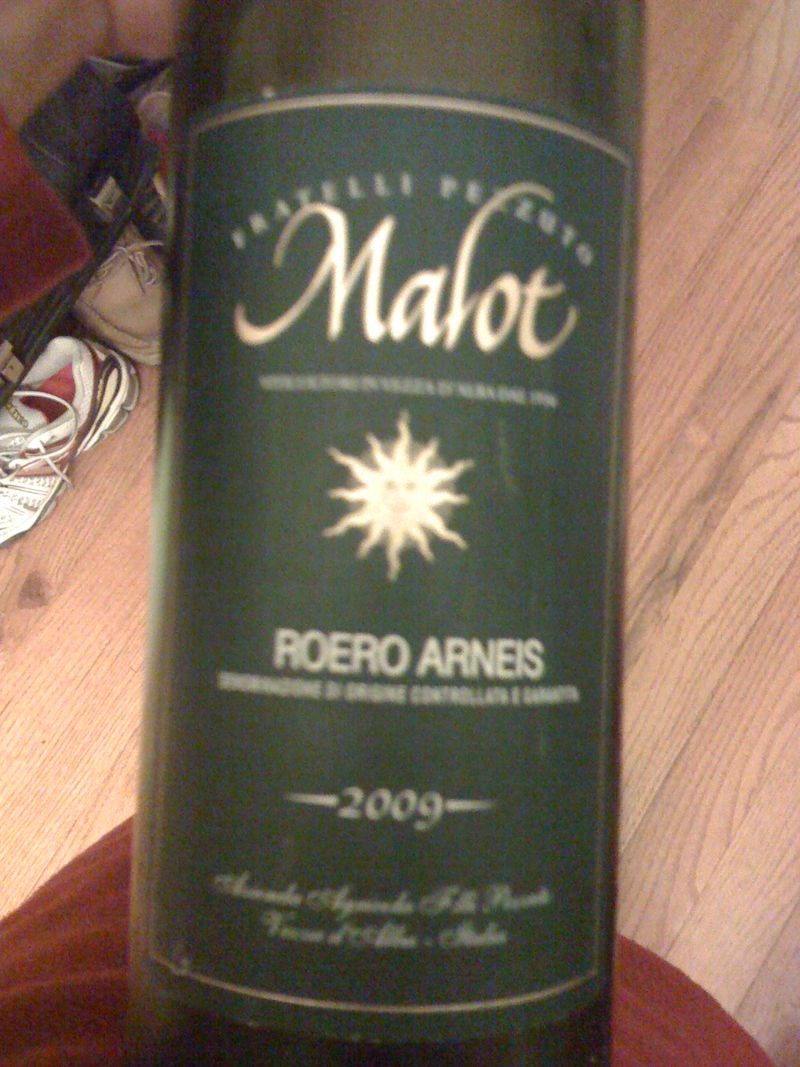 I'm starting to get exhausted by all the light, crisp, citrusy, white wines around.  It seems like every white I pick up wants to be a stainless steel aged New Zealand Sauvignon Blanc.  I like NZ Sauvignon Blanc well enough, but I don't want it to be the only white I drink.  More and more whatever inexpensive white wine I pick up, be it Austrian Gruner, Alto Adige Pinot Grigio, or Chilean Sauvingon Blanc; they're all starting to taste the same.  White wine didn't used to be this way.  Rich, softer, less acidic, earthy whites used to be more common.  Clean, fresh, citrusy whites are great for some foods, but not all, and just on a philosophical stand homogeneity is abhorent to me.

Arneis is an indigenous white grape from the Piedmont region of Italy and it's flavor profile is genreally softer and less acidity driven.  The Pezutto family's example has aromas of bright white wild flowers, enough acidity to still be fresh, but the body is rounder, the texture is smooth, and I feel this is an easy wine to drink and appreciate.  It has some really unique, intriguing hints of roasted chestnut on finish and a touch of spice.  Over all it's a very pretty, serene, relaxed, refined Italian white that should really come into it's own as we move into fall cuisine, pastas, root vegetables and the like.

This is available at the Freeport Cheese and Wine Shop, Tess's Market, and Black Cherry Provisoins.  The retail price is about $15.99 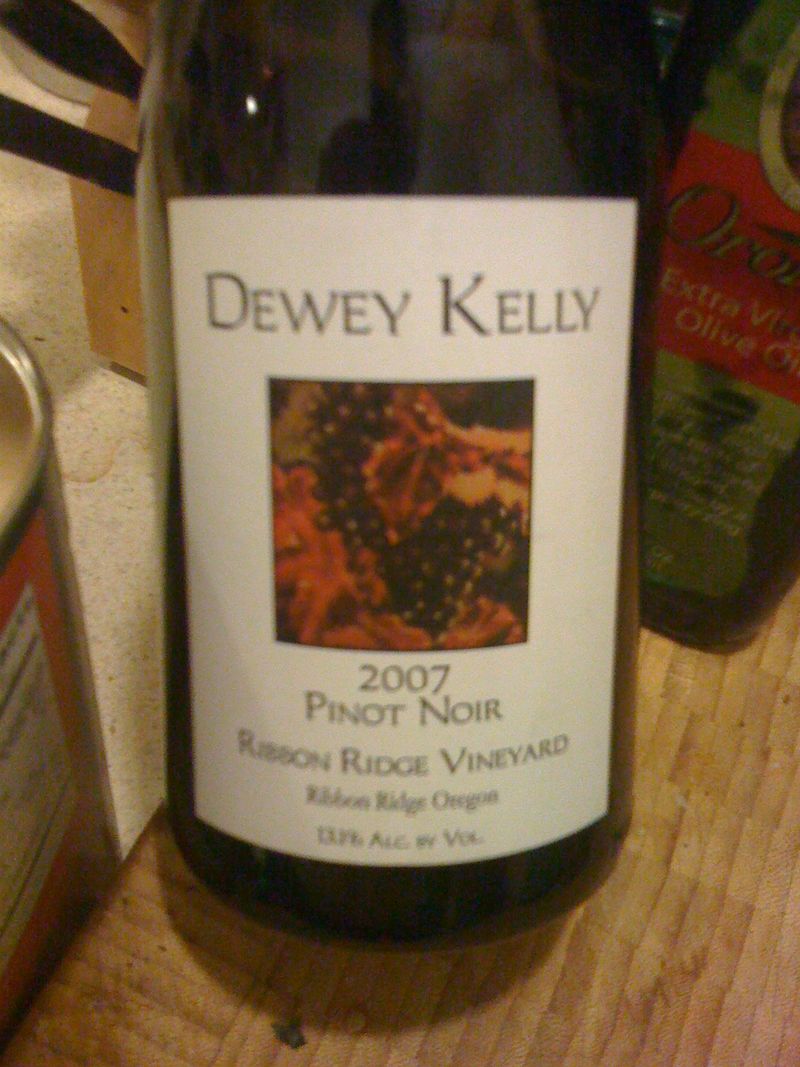 Dewey Kelly is a small family operation on Ribbon ridge located in Yamhill county OR.  Dewey and his wife Robin purchased the property, but got caught up in other things (life) and didn't begin planting until 2000.  At this time they have 9 acres planted and sell most of their grapes on to other wineries.  They keep some of the best for themselves however, primarily from the 2.5 acre "wedding block", the location they were married in at the top of the vineyard.  The soil here is shallower, drainage better, and a bit more exposed to the sun.  All of this results in exceptional grapes.  Dewey made 400 cases of this vintage.

This is a more old school Pinot to me.  Dewey's wine making methods result in a darker, more complex, tightly wound Pinot than the prevailing style in Oregon.  This Pinot has a really pretty inviting, almost delicate perfumed aroma once it opens up and I pick up some floral qualities, but the aroma also has some pronounced smoke and woodsiness to it.  Underneath the pretty floral and delicious ripe raspberry there's hints of roasted meat and what I can only call deep dark forest floor.

The palate fulfills the promise of the aroma here with bright acidity right at first, underpinning fresh berry fruit, but then more dry earth and tannin coming in on the finish.  It's very well polished and these very different flavors are well integrated and cooperative.  The texture is smooth and refined, but oooh I love this dark slightly rustic tasting finish!  It was great with the stuffed pork roast I picked up for dinner; Thanks Provisions!

I'm not going to call this "Burgundian" in style because I feel it would be an insult to the unique character of this wine and Dewey Kelly's vineyard and terroir.  But this is a darker, deeper, Pinot than what I think of as a typical OR style.  It's polished, but it also doesn't just leap out of the glass with ripe cherries; it's got more subtlety than that.

I don't know if that made any sense, but bottom line this is a very well made, deep pinot with character that's hand made and retails for under $25.  That's a steal.  You can pick this up at: Vic and Whit's in Saco, Freeport Cheese and Wine Shop, Lily Lupine and Fern, The Black Sheep Wine Shop, Provisions, and Tess's Market. 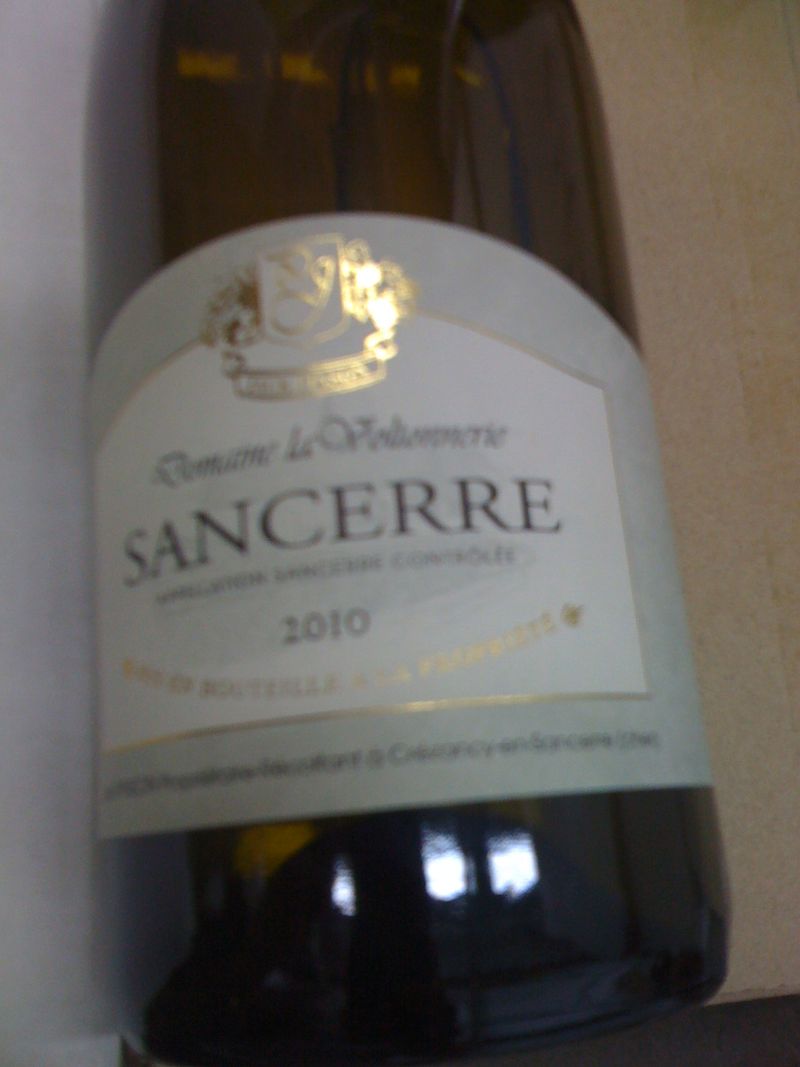 Voltonnerie is a family domaine located in the town of Crézancy-en-Sancerre in Sancerre.  The domaine was created by Jack Pinson back in 1970 when he bought 2.5 acres; he has now expanded to 32 spread over chalk/limestone slopes and some plateau with more clay.  Sancerre is one of those appellations that I love because it's often easier here to taste the terroir.  The grapes here pick up some pretty serious mineral structure and bright acidity that really makes the flavors of the wine pop.

The 2010 vintage seems better to me than 09 or 08 was.  It's ripe, but not as big as 09 was.  I really like this and think this is an outstandingly well balanced Sancerre.  It has all that mineral structure and acidity from the limestone and chalk, but it's also rich and ripe and has lush tropical fruit right up front leading the wine.

It's a combination of exuberant pineapple and grapefruit, followed by that leaner mineral quality that focuses the wine and gives it a great finish.  This is a fantastic summer wine and it's one of the best priced Sancerres around at just over $20.  This is what I'm always looking for: great wine for the price of mediocre wine.