I've written about Hatzidakis before (Click here to see the Santorini 2007 notes) and this is a perennial favorite out of all the wines Devenish handles.  The Santorini's depth, complexity, unique flavors, and the absurdly harsh environment that produce it Wow me! 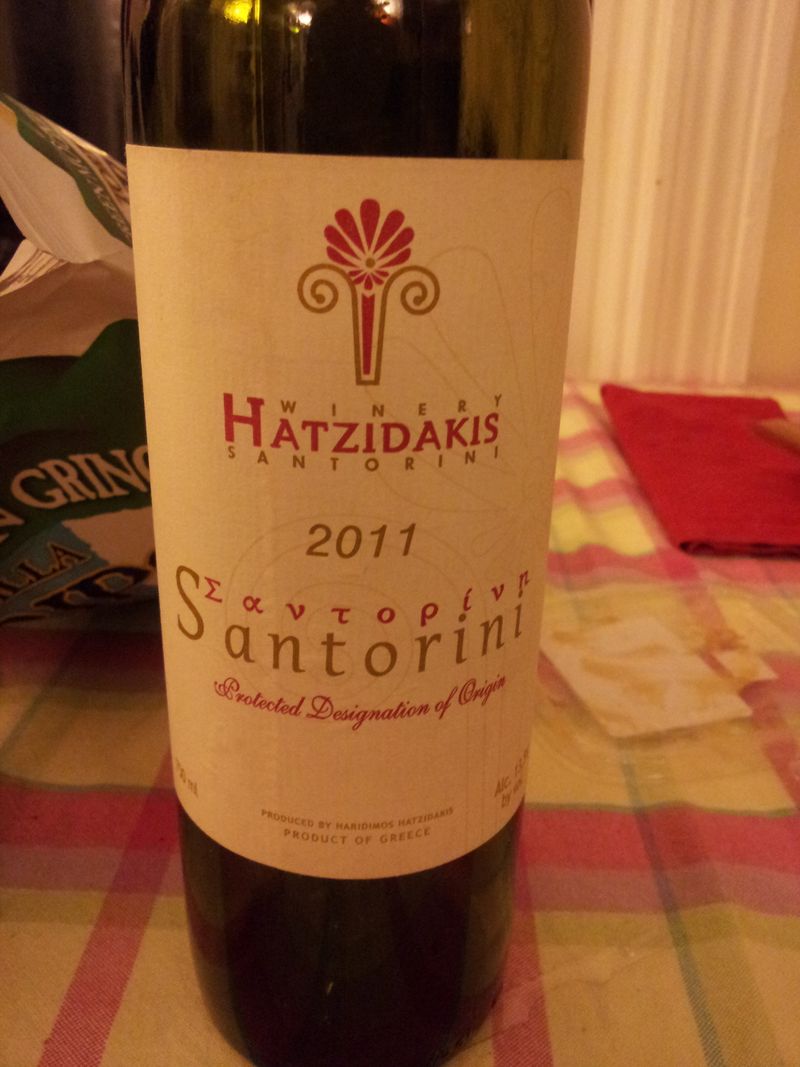 So Haridimos Hatzidakis; he moved to Santorini originally to work for Boutari and run their operation on the island.  That relationship ended but he had fallen in love with Santorini and started reviving some disused vineyards that his wife's family owned.  Eventually that relationship (the marriage) also ended, but he was still totally in love with Santorini and the extreme nature of it's wine making so he started the difficult search for vineyards of his own.

Santorini is a small volcanic island in the Cyclades islands of the Agean.  The island has a distinctive half moon shape from a volcanic eruption 3000 years ago that destroyed 1/3 of Santorini's land mass.  The island rises quickly and many of the vineyards are at approximately 1000 feet above sea level.  The conditions that make Santorini such a popular tourist destination (constant heat in the summer, no clouds, no rain) make it a very difficult environment to grow wine grapes, however the Assyrtiko grape seems uniquely suited and preserves it's acidity even in the oppressive sun and heat. 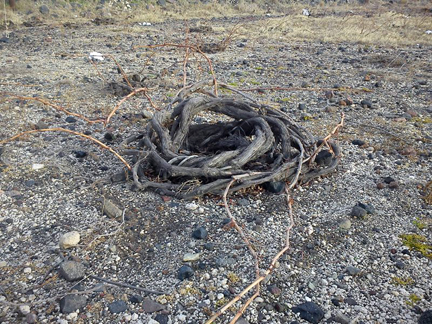 The vineyards are so dry and windy that the vines have to be trained into low basket shapes to protect the grapes and collect moisture. 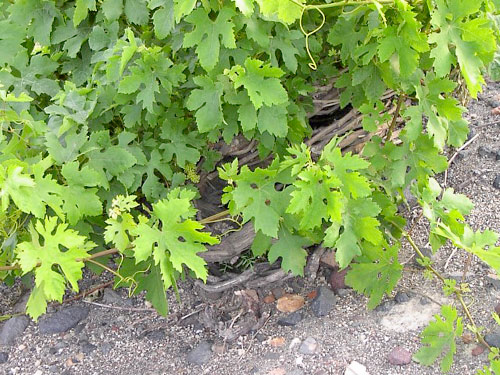 here's the Stefani (as the low bush vine is called) in full bloom in the summer.

Aroma: This is a brighter more focused style, kind of a departure from Hatzidakis of past years.  This is aromas of fresh wild flowers, lemon, a hint of anise, some fresh pine, and there's also a fuller meatier cooked aroma too- kind of a baked lemon tart.  It's pretty strongly aromatic and you can tell this is going to be an energetic, driven, mineral white wine by the aroma.

Taste: The Hatzidakis Santorini is a big, rich, full bodied wine and has an expansive palate that clothes it's intense minerality and energetic acidity.  It's racy, cut, young minerality fades into a more lush mid palate with preserved/softened lemon and some spice.  I get a kind of gravelly taste in there too as well as some lemon grass.  It's a complicated wine but it's not annoyingly so and is well balanced.

Though this doesn't have the oily and nutty qualities that some past vintages have had, it's very pure and clean but still screams Santorini with all those flavors.  This is a killer summer white for grilled meatier fishes, all salads, lamb; lamb for sure.  I just had this with Bluefish and it was perfect.  This is white wine that has the complexity, balance, and sense of place  that costs $30-$40 in Savennieres, white Burgundy, and dry Riesling.  This is more like $17 retail.  Available at the Rosemont Markets, Niky's Restaurant, Bel Cibo da Cherie's, Whole Foods, Browne Trading, Emilitsa, Trattoria Athena, Mckean and Charles, and the Wine Seller.

I'm really excited to have just gotten my hands on this bright and lively young summer wine!  The Bonhoste is aromatic and refreshing at a great price, and has real character from the unusual variety of grape that it's made from. 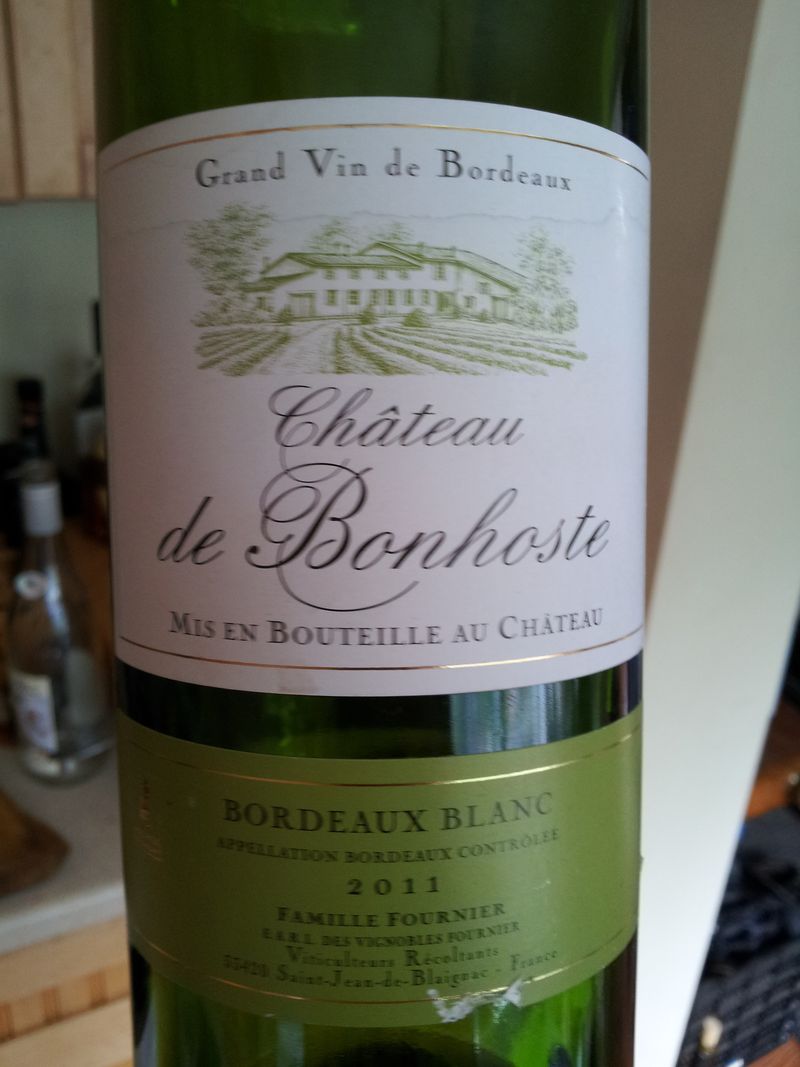 Chateau Bonhoste was created in 1977, but the Fournier family has been in the same town outside of St Emilion farming since the late 1800's.  In 1977 Bernard Fournier bought an 11th century chateau in the "Bonhoste" region and began seriously farming grapes.  Chateau Bonhoste has since passed on to his children: Yannick and Sylvaine.

The estate is about 4 miles southwest of St Emilion on the right bank of the Dordogne river and has lots of the clay and limestone soils that the region is famous for.  They farm sustainably and follow the "lutte raisonée" ideal which is a French philosophy of farming that is as close as possible to organic while still leaving the option of using modern treatments if they absolutely have to.

Aroma: Bonhoste's version is really aromatic and has intense ripe white grapefruit and lemon, but there's also a herbal leafy quality that is hiding behind the fruit.  There's this hint that's like the smell of ivy wet from a quick rain.  I also pick up a hint of a stony aroma that reminds me of wet slate.  It's definitely a bright spring time kind of smell.

Palate: The Bonhoste Blanc is vivid and has strong acidity, but it's balanced by some soft ripe grapefruit and pineapple.  It's a rich mouth filling wine that has the kind of mineral mid-palate that gets you salivating.  I don't think it's too acidic; I've certainly had and enjoyed higher acid Loire wines and it's not as big and in your face as some of the stereotypical NZ expressions. A really cool slight pepperiness sneaks in on the finish that I've gotten from Sauvignon Gris before.

This has some cool aromatics and ripe fruit, while staying light on it's feet and refreshing.  I'm really excited to drink this on hot summer afternoons with shell fish, crab, or cold chicken salad.  It's generally priced about $13 and is available at Black Cherry Provisions, the Rosemont Markets, Oh No Cafe, Whole Foods, Freeport Cheese and Wine, Provisions in South Freeport, and Downeast Beverage.  And you can taste it by the glass at LFK in Portland or Old Vines in Kennebunk!

I've written about Galicia before and my love of Mencia is well documented, but I'm pretty excited to have added this wine to the Devenish Wines line up.  Galicia is a starkly beautiful rural region jutting out into the Atlantic up above Portugal; there isn't much here aside from wine and the pilgrim destination of Santiago de Campostela.   Ribeira Sacra is in the interior of the region, away from the ocean and following several steep river valleys. 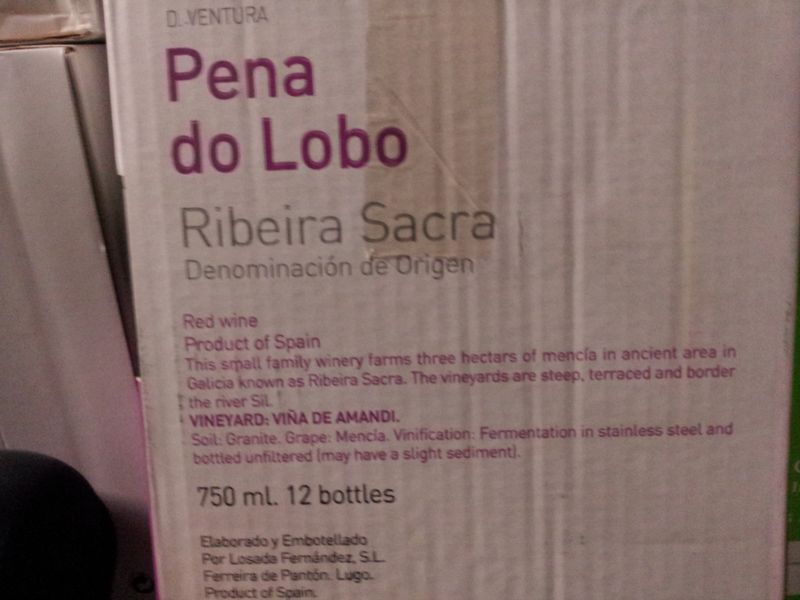 In the warmer south east interior of the region Ramon Losada is using his family's old vineyard holdings to make the three wines of D. Ventura.  All are single vineyards with different terroirs.  This, the Pena do Lobo. is a 6 acre steeply terraced granite soil vineyard on the river Sil.  Ramon has help in the farming and wine making from Gerardo Mendez of Do Ferreiro in Rias Baixas and has converted to organic agriculture.

Aroma: Lots of berries, very heady and aromatic.  I get both fresh and dried cherries as well as some blue berry, cranberry, and roses.  It's pretty deep and ripe smelling, but also has a slightly earthy/furry aroma.  I can also smell something leafy and green that I think is ivy.

Palate: This is definitely the most racy and high strung Mencia that I've tasted.  All that granite shows through in the really lively minerality!  The bright fresh berry fruit hits me at first with raspberry and cherry, but then it builds and darkens with more black cherry.  The wine is focused and sparkly like the stone it is grown out of!  A hint of black pepper shows up near the finish and is followed by soft supple tannins.  This is impressively mouth watering and drinks like really excellent cru Beaujolais; maybe Morgon.

This is a pretty limited wine, but was just released and is available at currently at the Rosemont on Brighton Ave, Browne Trading, Dipietro's in South Portland, and Downeast Beverage for (approx) $25

Domaine Terres Blanches is a fantastic little winery about 20 miles south of Tours in the Loire Valley.  It's run by a younger couple: Benoit and Celine Blet.  The Blets farm biodynamically and although Benoit was shy and spoke no English when I met him it was easy to tell how passionate he was about his land and terroir.  I actually wrote more of a full article on how much I love his wine making here. 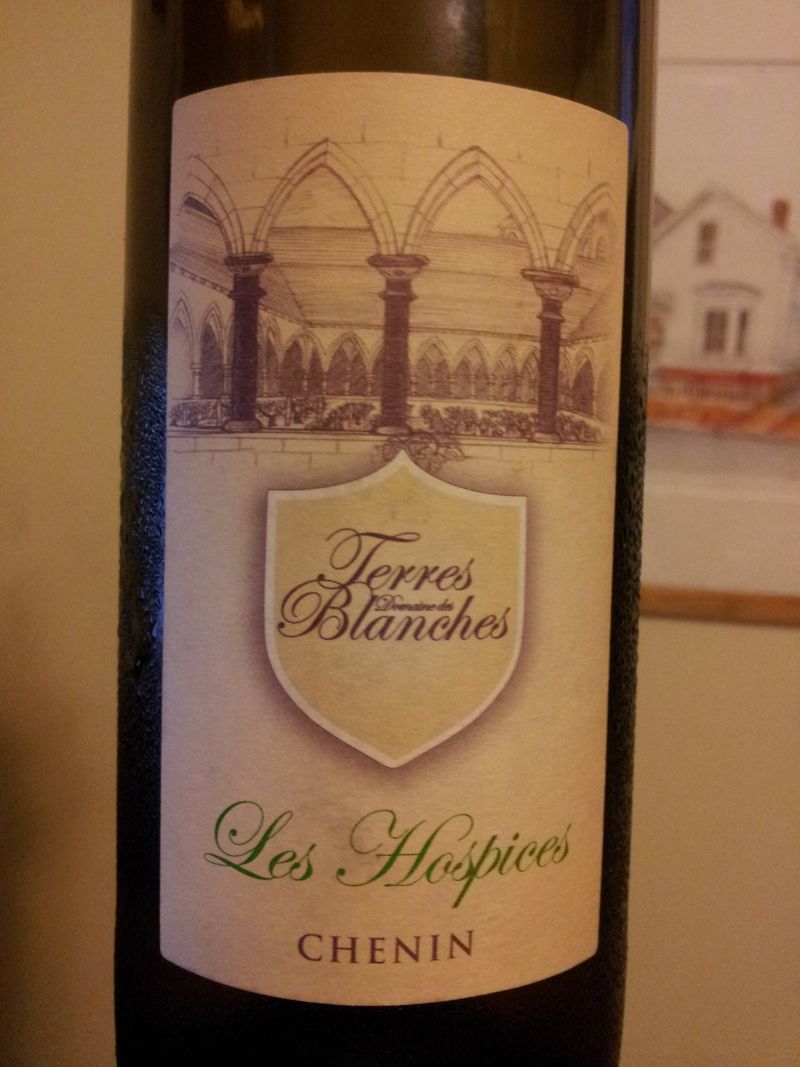 Benoit's dry Chenin is different from all the other Chenins I've tasted, yet still displays a lot of the qualities Chenin is famous for.  It's not as fruity as Vouvray and it seems lusher and racier than my idea of Savennieres. The soil and climate here is distinct from those appelations though so it makes sense that this would be different.  There doesn't seem to be much rock here.  He's located far from the cooling influence of the river and the ubiquitous Loire limestone is absent.  The soil seemed pretty rich and had a slight red tinge.

Aroma: There's some zingy lemon, but also wet slate and green apple.  Just from the heady aroma you can tell it's going to be lively and mineraly.  I also pick up a pretty powerful aroma of thyme, tarragon, and maybe some fresh basil and sorrel; the aroma includes a real spicy aromatic quality as well!

Palate: Oh!  God do I love Chenin like this!  The texture is lush and fleshy, the wine lingers on and on showing more mineral and slightly spicy herbal flavours on the finish.  Just like the aroma, the palate isn't fruit driven either: it's rich and juicey but has more mineral flavours and a touch of a chalkiness.  The acidity isn't as intense as in a Vouvray either, it's the tasty saline minerality that does the dancing here.  This is so beautiful!

Domaine la Suffrene is a marriage of old school tradition and modern innovation.  The current owner/wine maker is Cedric Gravier: the first member of his family to become a professional wine maker; however his family has been farming grapes on the Suffrene property for generations.  Cedric was the first generation to see the opportunity and take the risk of making wine himself. The winery is a similar mix of old and new, with modern temperature controlled stainless steel fermenters as well as huge old oak casks (Foudres) for ageing. 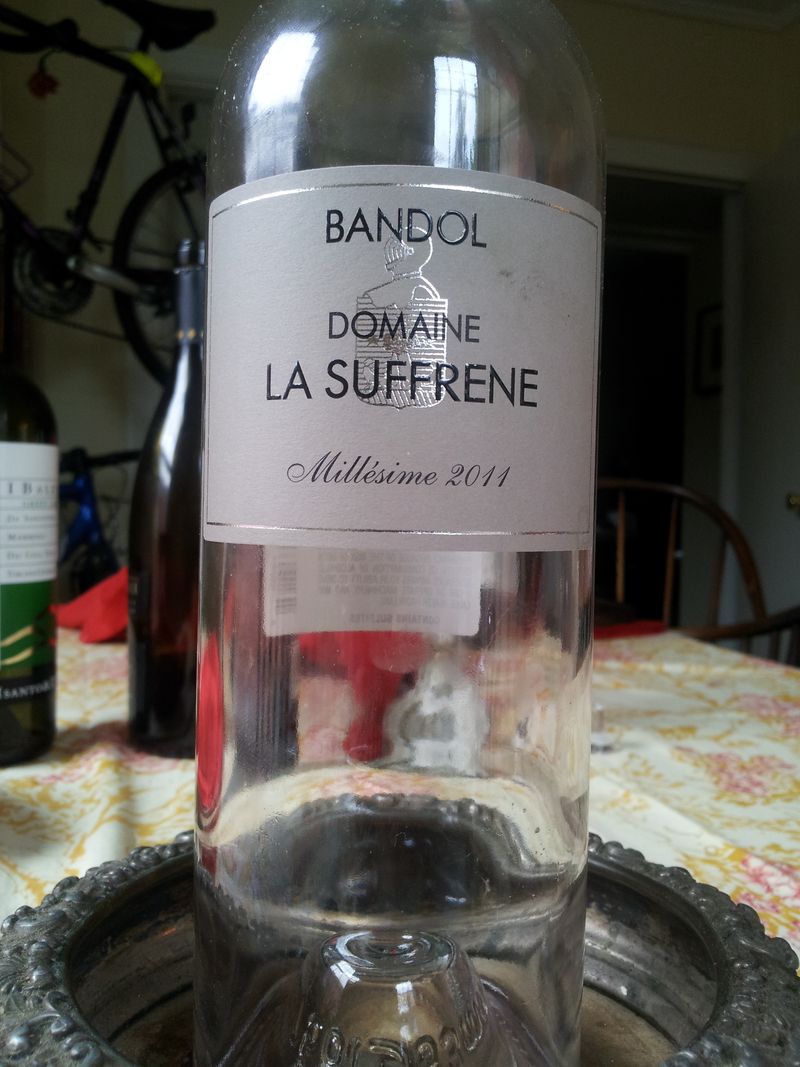 Bandol Rose led the campaign to resurrect rose's reputation in America, and though there are many other roses available from all over the world, tasting this immediately demonstrates why Bandol was and still is at the fore front.

This is a really powerful rose.  It's pretty and elegant but there is serious depth to.  I get powerful floral aromas of lilac, as well as fresh strawberry, raspberry, and a hint of the peppery aroma of fresh thyme.

Taste: This fills your mouth.  The texture is ripe and fleshy, but there is very bright acidity too.  The fruit is concentrated very ripe ruby grapefruit.  It has a meaty component; I feel like there's enough substance that I can sink my teeth into it.  The fresh, spicy, herbal qualities are their in the back ground of the finish as well as just a hint of a zesty bitterness.

This is a really vibrant and complex wine.  If you're looking for a killer rose for a grilled fish grilled chicken, if you want to drink a glass of concentrated Provencal France: this is you're wine.

This is about $24 at Aurora Provisions and Whole Foods.