This past Saturday the 14th was Bastille Day.  At some point a couple months ago I got the idea into my head that it would be a great idea to through a big French themed multi course feast to celebrate.  I conspired with my friend Philippe, expert on things both french and gastronomic and we hit on the idea of roasting a pig!  The time and money that are required to roast a pig would be a great symbolic gesture of our appreciation and respect for French culinary culture. 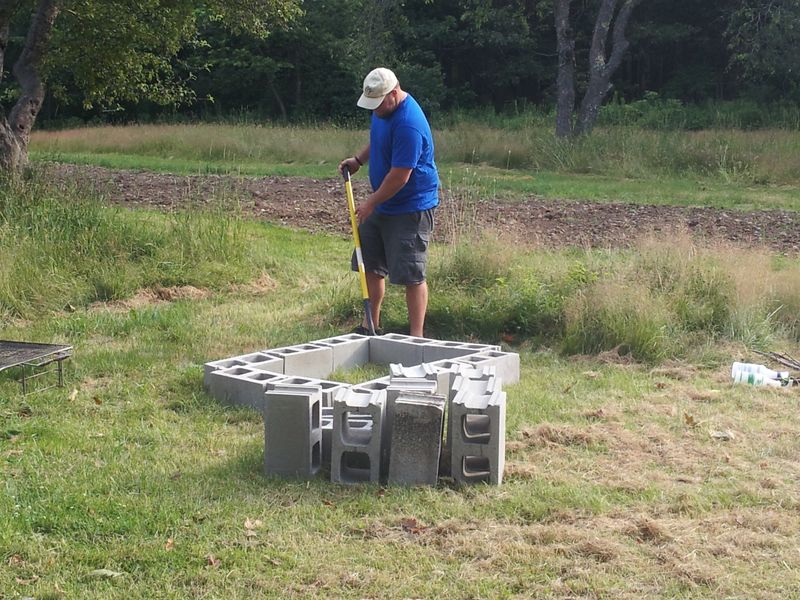 Beginning to construct our roaster 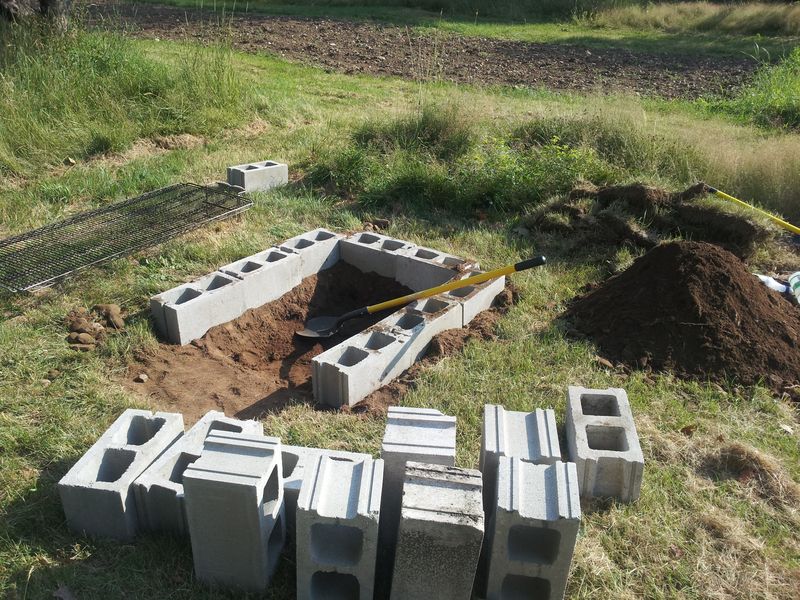 The pit in progress.

It was at some point about 7:30 Saturday morning as we were digging the pit and I was attacked by ants that I asked Philippe why we were doing this again?  "Philippe, What are we doing this for again?  Why can't we just pay $48 and eat a lot of food? Working around the clock in the sun and bugs to pull this off is ridiculous!"  We did pull it off, but it was an almost ridiculous string of mis-adventures that we had to overcome.

The first real hurdle was the phone call I got on the afternoon of Wednesday the 11th.  The one that went "Hi, Ned?  I don't know what's going on, but maybe you can clear this up.  Did someone order you a 220lb pig for Bastille Day?"  Yes, that's right, the pig I bought was 220 lbs; hanging weight.  Thankfully it was split down the middle.  Problem was Rosemont didn't have space in their cooler for it, so I began a quest to find cold storage for 220 lbs of pork.  After some hunting I ended up putting it on ice in a pair of huge coolers as the best solution.

The next stumbling block came when Friday afternoon, just as I was finishing deliveries and planning on going to pick up materials to build the roasting pit, I got a flat tire.  "No big deal I thought, I'll use a can of Fix a flat".  The Fix a Flat just got spit out through the hole.  "Ok, still not a big deal" I thought, "I'll swap the spare on".  Then I sheared off one of the lug bolts that the wheel bolts to.  That's a big problem.  So I did the only thing I could do and called AAA to get my van put on a flat bed.  Philippe and I finally made it over to Turkey Hill farm: the site of the festivities, at about 10:30 that night to have a look at where we would be siting the roasting pit the next morning.  Philippe hadn't slept the night before and had been 26 miles off shore in a 17' boat at 8 that morning and I wasn't in much better shape so we got home as quickly as possible and managed to get about 5 hours of sleep.  I was up at 5:00, called Philippe and we headed off to Lowes to buy all the cinder blocks and charcoal.  Then it was over to Turkey Hill to start digging the pit.  Once Philippe had that in progress I borrowed his truck and went over to my warehouse to pick up the pig.  That went smoothly aside from the minor hitch that I tried to put gas in the second gas tank of his truck.  Which happened to be the gas tank that's rusted out and the gas poured all over the ground.  So once I dealt with that and the fire department it was smooth sailing again..... 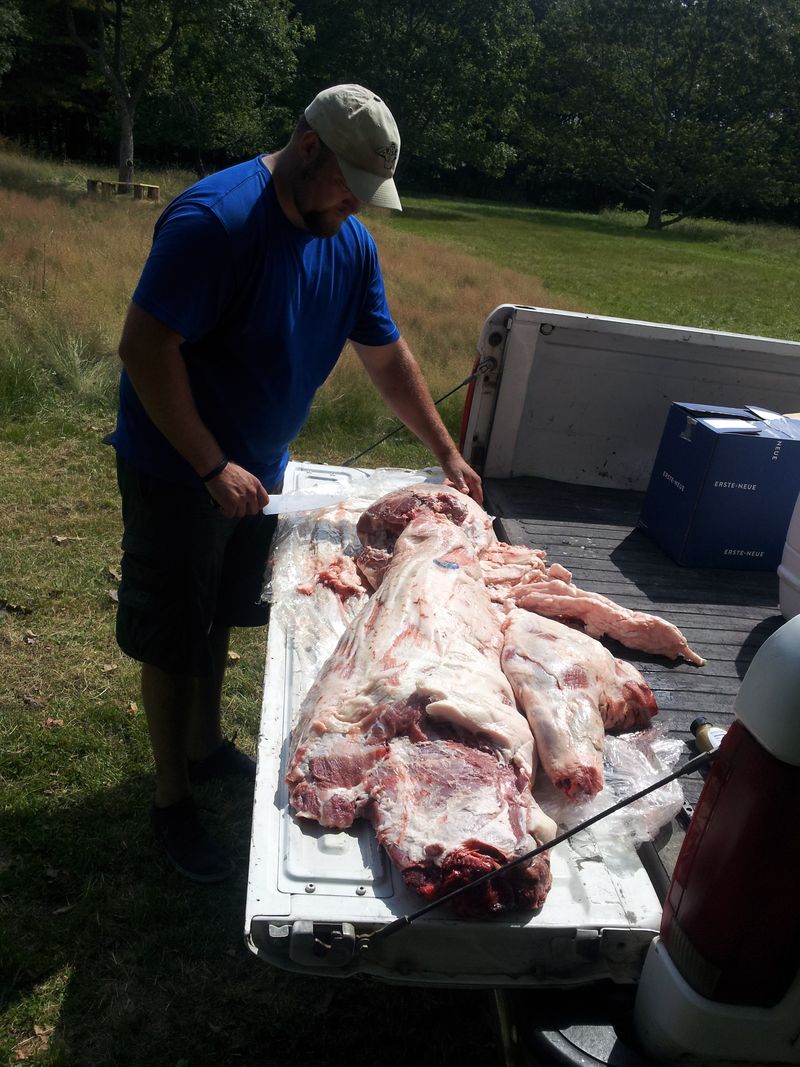 Breaking down the Beast. 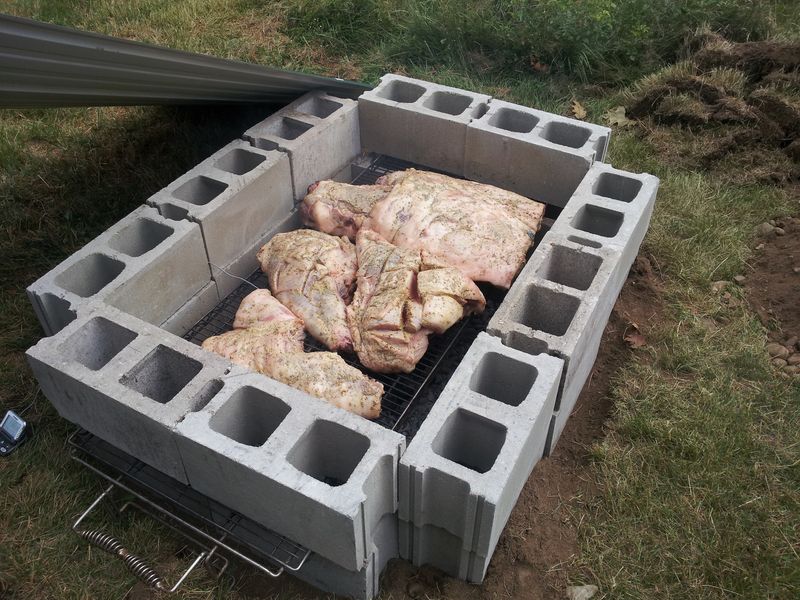 The pig all on the roaster.

The half pig I took over didn't have the skin on it so we decided to break it down on the tail gate of Philippe's truck and put it in the roaster in sections.  This made it much more manageable and ensured even cooking. I then took off to make a frenzied run to pick up last minute ingredients for a pasta salad.  I made the terrible decision to include fava beans and wasted about an hour steaming and shucking pounds of them.  I made it back to the farm about an hour ahead of Go Time and found Philippe having a great time in deep conversation with Peter the 84 year old owner.  They were gossipping about all the gentrification of Cape Elizabeth and how things just weren't the same as the old days.  Brad Messier was already there from Rosemont and Craig Lapine arrived soon after.  Between the group of us we got tables set, wine opened, and everything came together just as guests began to arrive. 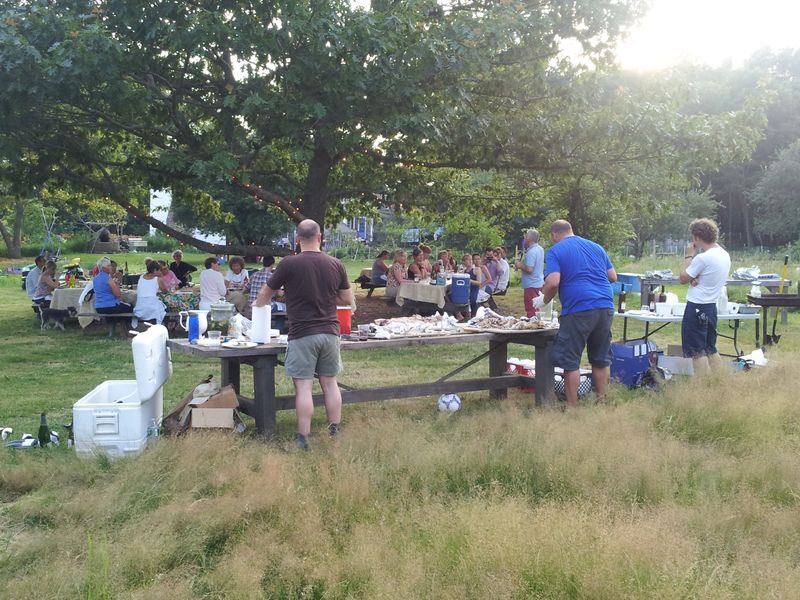 David Levi prepared the first course of pork liver pate with black trumpet salt and day lily blossoms, Brad made a great salad of roast chicken and spring greens from Fishbowl Farm; then we served the pig.  Philippe and my friend Jake Holz brought the pieces out of the pit and gave them time to cool, then Philippe put on rubber gloves and started to just pull it apart by hand.  Everyone slowly walked up and Philippe served them select pieces from the various parts of the animal that we had laid out.  The meat came out fantastically and everyone seemed extremely impressed; not least Philippe who seemed to be ecstatic to have so much delicious roast pig in from of him.  I served my pasta salad alongside it and just when everyone seemed to be totally sated I brought out ice cream from Catbird Creamery to finish meal. 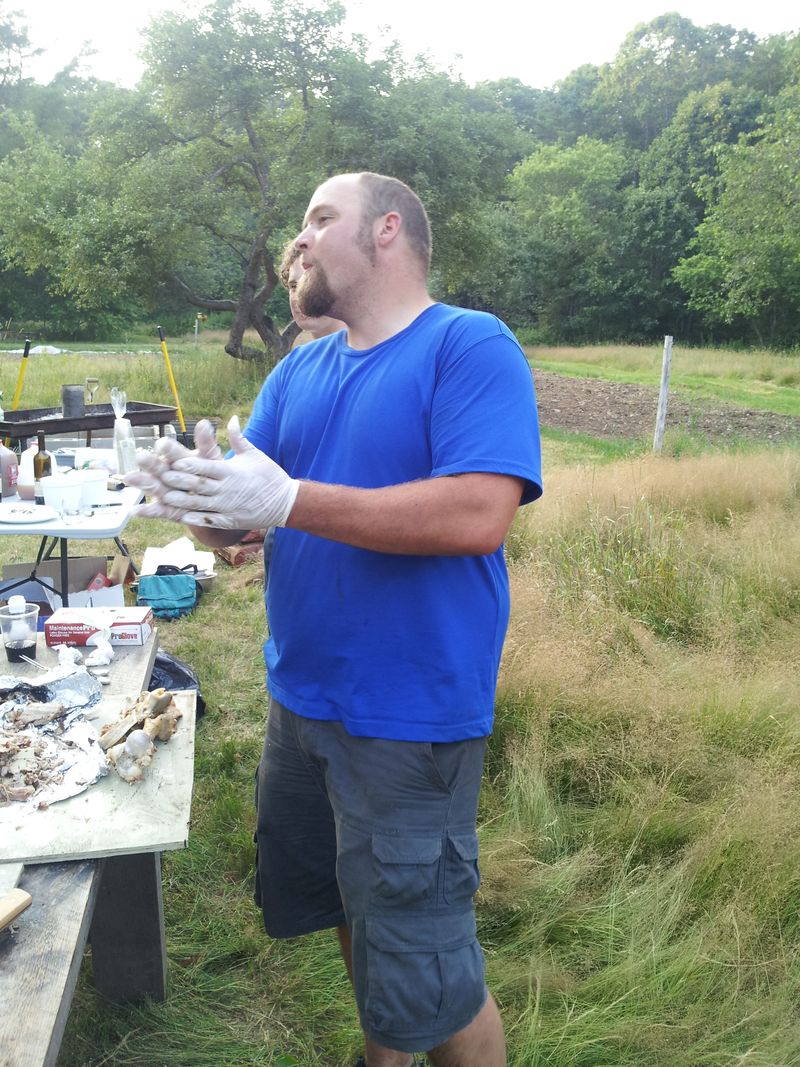 Philippe in ecstasy over the pork. 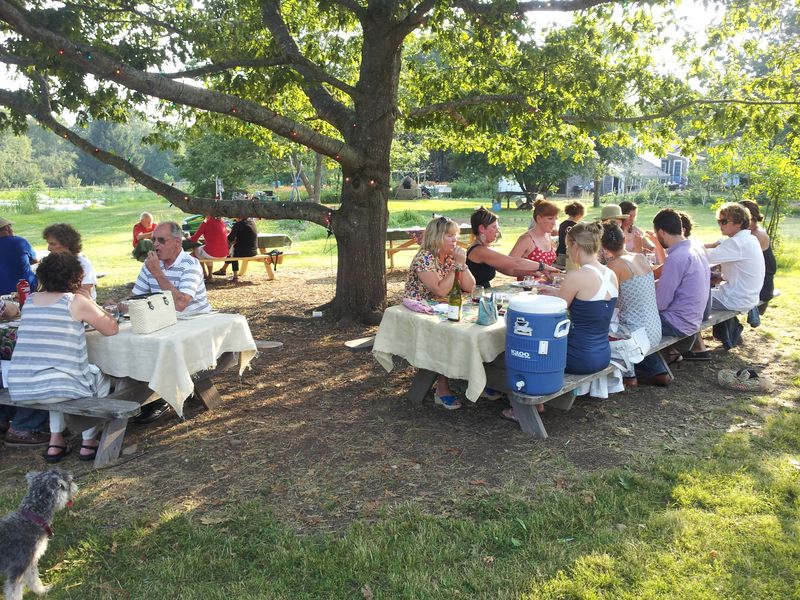 In the end the meal all came together and was delicious.  Turkey HIll Farm was beautiful and once people arrived all of us involved in the event relaxed and enjoyed the ride.   The atmosphere was celebratory and and casual; people circulated from table to table and socialized between courses. In the end I got my Bastille Day party and managed to raise $315 for Cultivating Community; to me that's a big success.

Once everyone left we even deconstructed the roaster, filled in the hole, and put the sod back on top: leaving no trace!  I have a much greater respect for all the restaurants that put on events like this and catering companies. As usual most of the success isn't really due to things I did directly, but to all the other people that helped me out:  Philippe Donald, Brad Messier, David Levi, Craig Lapine, Joe Fournier, Jake Holz, and the Rosemont Market in general.  Luckily I can learn from all this and I plan on doing this again next year bigger and better!