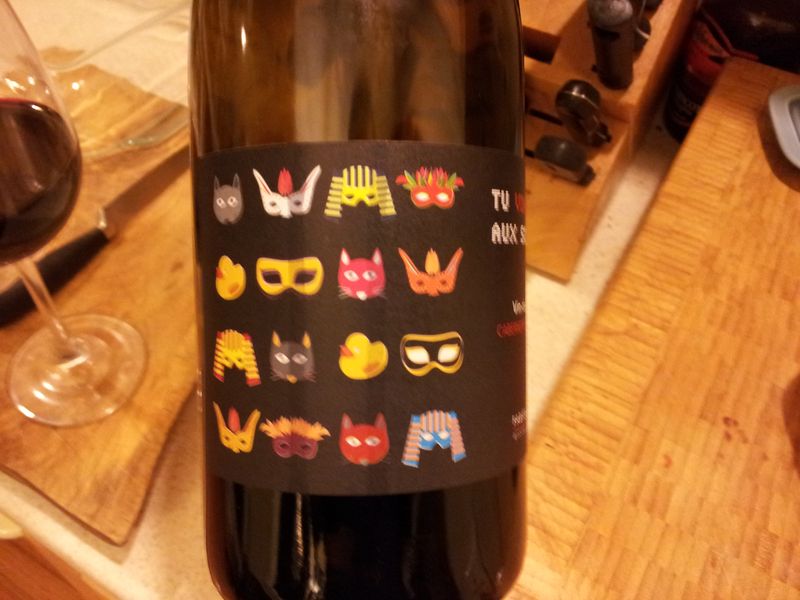 Tu Vin Plus Aux Soirees.  "You wine more evening parties" is the best translation I can come up with for this oddly eye catching label. As non traditional and unusual as the label is, it fits the wine quite well!

Fabien Jouves is a young, passionate, sometimes rash guy making wine in a very tradition bound rural wine region.  My opinion is only based on tasting his wines and reading a bit about him, but sometimes that's more accurate than asking someone face to face; actions (wine in this case) speaking louder than words and what not.  Fabien Jouves took over his family's winery in 2006 and created the Domaine Mas del Perie.

Mas del Perie is in Cahors: a very old wine region in France's southwest, up river from Bordeaux and significantly more continental.  Back in the early 1800's Cahors was the largest wine region in France and renowned across western Europe, but then trade embargoes and Phyloxera ruined Cahors.  Just now Cahors is beginning to reclaim some of it's glory.

I can't help but imagine that Fabien Jouves, being a young guy looking to learn and create his own wine making style and expressions must be kind of provoked by the limiting traditions, rules, and confines of Cahors.  Fabien makes wines under the Mas del Perie label, but he also makes wines from grapes and blends of grapes that aren't allowable in Cahors.  Instead of putting some normal Mas del Perie label on them he seems to relish coming up with all kinds of creative graphics such as the one below: 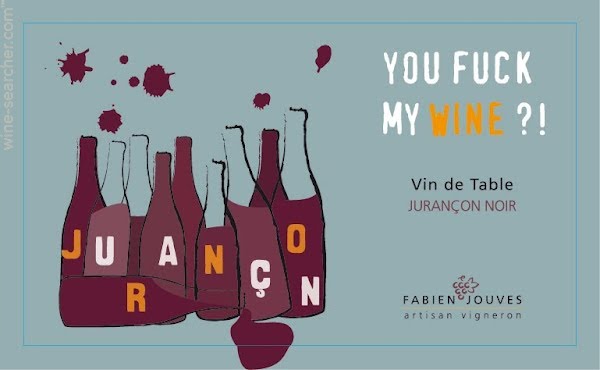 Fabien stuck that label on a wine made from Juracon Noir as a message to the authorities after they'd told him he couldn't use Juracon Noir in AOC Cahors.  I'd love to have gotten some, but the US government isn't to big on profanity on alcohol labels so it can't come into the country.

Fabien has an approach to wine making that has similarities to Burgundy.  He's very focused on terroir and the small differences in drainage and soil composition between the many parts of his vineyards.  His response to all these small variations is to make many different wines from them.  This flies against common practice in Cahors and it's cultural cousin Bordeaux where the more common response is to blend all those separate flavors and expressions together into one expression of the wine maker.  It's interesting to note that although his labels and marketing are brash, when it comes to wine making philosophy he seems to be all about the dirt, vines, and climate: the focus isn't really on him.  Fabien Jouves farms biodynamically and makes the wines as naturally as possible; that means wild yeast and ferment, no filtering, and almost no sulfur.

Aroma: Earthy aromas of forrest, ginger bread, and musky cut cedar hit me right off the bat.  There's a powerful aroma of spicy dark baked blueberry right at first along with a rich slightly sweet meaty aroma.  Then I get a  scent of charred wood from the Tu Vin Plus Aux Soirees.  With all the rich juicy berry fruit and cooked cherries this wine smells like dessert baking.

Taste: This wine is a lot of fun, it tastes like it likes to play and have fun.  There's big dense blueberry and black raspberry fruit.  The Tu Vin Plus Aux Soirees is lush, filling, and giving.  Generous, expansive, and fleshy; like an Aussie shiraz but livelier and not as peppery.  The Tu Vin Plus Aux Soirees is still brawny and kind of rustic, but it's got manners too.

This is about $16 and is available at the Bier Cellar, Downeast Beverage, Rosemont Market on Munjoy Hill, 40 Paper, Aurora Provisions, Oakhill, Leroux Kitchen, Old Vines, and Pier 77

Adam and Eve and Grapes of Truth

I do salute you all for actually caring about and putting some thought into the origins of what you drink.  Ignorance is bliss, as they say, and it is very easy to find inexpensive vino with the nessecary active intoxicating qualities as long as you pretend it didn't exist before magically blinking into existence on that super market shelf.  "Splurch"! That's the sound of another bottle of Three Legged Toad spontaneously generating on the shelf of Big Deal-Mart.  Funny idea, eh?

For all that most people know about wine that might actually be true.  You, however, have made the brave and sometimes uncomfortable step of becoming aware of where wine comes from.  And just like Adam and Eve eating that apple or bunch of grapes or whatever your poison, once you've drunk the Burgundy you can't go back.  Wine can be made in many different ways.  It can be made in tiny hand made batchs that demand a wine maker with skill and intuition or wine can be made to a formula in giant antiseptic gleaming factories where, honestly, the flavor profile and label can be typed into a computer and the desired result is spat out the other end.  "Splurch"!

Now that you are aware of these realities it can make wine shopping more of a challenge, but hopefully the discoveries and surprises are worth the effort.  And hopefully Devenish has helped ease your search for wines of more truthiness, to quote Stephan Colbert.  Just as you have become aware of this huge variation in the wine world and choosen to look for wines made more naturally and authentically; Devenish long ago made the decision to focus on hand crafted wines that honestly express a particular place, culture, person, or combination thereof.  That choice hasn't always made our work easy.  Wines like this aren't always easy to find, vary more year to year, and are generally made in smaller quantities with the result that we some times run out of things. No matter how difficult it gets at times; the knowledge that there is always going to be brilliant new wine out there keeps us going.  Well, that and the joy of sharing these exciting things.

Wine tastings are the best way for Devenish to share our discoveries and I encourage you all to sign up for our email newsletter and follow us on Facebook.  Devenish has some bang up awesome rock your socks wine tastings in the offing that you should absolutly get yourself to!  Here's the coming events page: Events!

I've felt that I haven't been drinking enough exciting wine lately.  As an antidote I started doing business with Zev Rovine and got some of the wines of Frank Cornelissen into Maine.

Cornelissen is pretty famous in the natural wine movement and his wines are as geeky and sought after as they come.  I'm not going to really delve into the stories and myth that swirl around Cornelissen as if he were some hermit mystic hiding on top of Mount Etna, but here's the basics.  Cornelissen is Belgian and got into wine as a collector in the 70s.  He happened to try a bottle of wine from Mount Etna at a restaurant on the Isle of Sicily and was so impressed he immediately went to track down the winery.  He fell in love with the place and it's wines to the point that eventually he ended up buying vineyards on the mountain.  According to the writings on him, of which there are many, Cornelissen is kind of a wine maker-philosopher preoccupied with the question of what is wine.  He has rejected monoculture and plants olive trees and other plants throughout his vineyards.  The wine has nothing added to it; nothing at all.  There are no preservatives, the fermentation happens with wild yeast, and the wine is aged in 400 litre underground clay amphorae.  Frank Cornelissen feels the amphorae give the wine a perfect mix of a bit of exposure to air, natural temperature control due to being buried, and unlike wood they don't impart any flavor of their own.

You can read more about the wines here: Frank Cornelissen 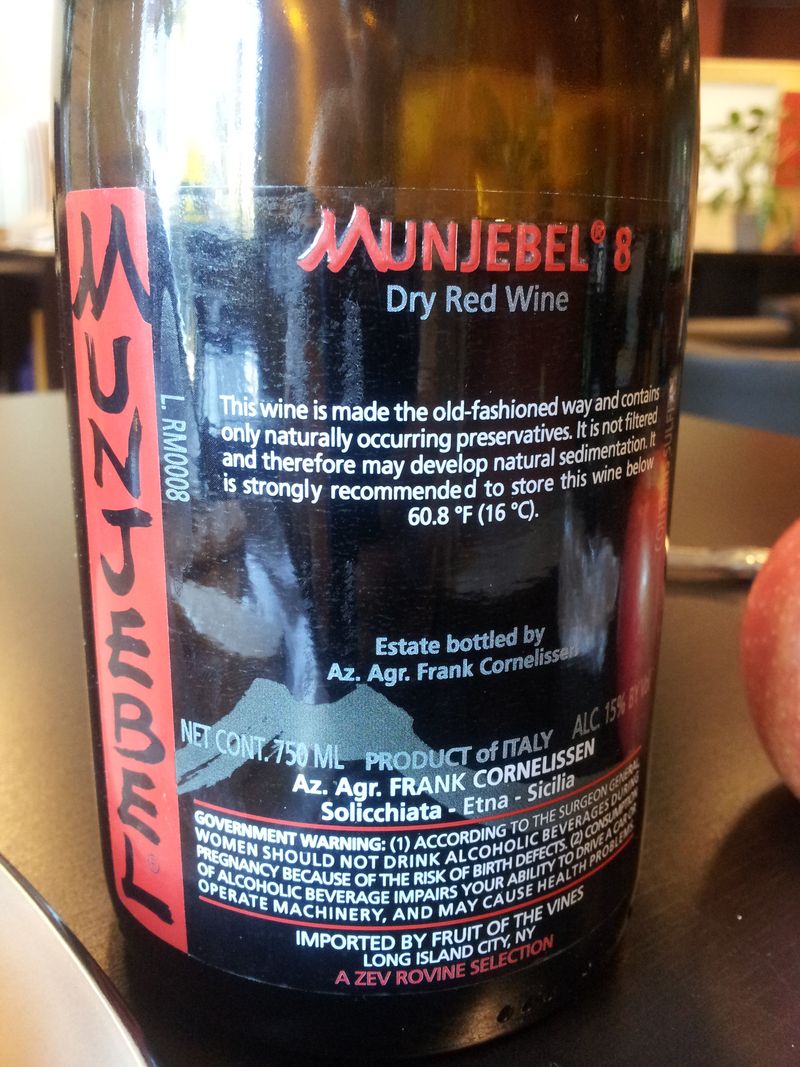 Aroma: What a perfect mix of aromas to warm one up on a winter day!  Pulling apart the componants almost seems uncouth, but here goes.  Most prominently I smell intense baking cherry pie, old pipe smoke (not the smoke itself, but a room that's been smoked in), a bit of leather, and some whiffs of charcoal and wood smoke.  I guess I'd sum it up as smelling like a wood stove in a log cabin with a fresh cherry pie keeping warm on it and an old leather jacket that's a bit damp hanging over the stove to dry.

Taste: This is a powerful and layered wine with substance that you need to spend some time with before it will give up all it's details.  The Munjebel has a burst of tightly wound dark fruit right up front; intense berry flavor like tiny wild low bush blueberries.  The fruit evolves into more of an open ripe cherry kind of flavor before picking up more meaty spice on the midpalate.  The Munjebel's mid-palate is rich enough that I feel like I need to chew it.  The spice flavor is a nice added dimension of black pepper with some twists of cloves and cardamom fading into a finish of pronounced meaty cashew nut and hints of dried cherries.  Like the rest of the wine the Munjebel's tannins mean business and are here in force.  They're in tune with the rest of the components: just like the fruit and spice they are powerful and long.  The Munjebel is a grippy wine that holds onto your palate for a long time. The wine tastes a bit young, but this Munjebel 8 is very good. Time will enhance it though.

I love that this is a natural wine that doesn't have any of the negative qualities people used to associate with this kind of idealistic passionate wine making.  It's unique, complex, and cerebral.  Here's to wines with no compromises.

PS. after another hour it is more savory.  The Munjebel's palate is a bit less fruity and more savory. The mid-palate has a hint of cola and soy and the finish is more seared roasted beef than nuts!  Still evolving and still delicious!