Vinland, the vision of Chef David Levi, opened roughly 3 weeks ago after much anticipation.  I've known David since he moved to Portland and he's a good friend of mine.  He's been fervently devoted to the idea of Vinland since before he moved back to Portland two years ago and the long lead time has resulted in lots being written about him and Vinland even though the restaurant has only be open a few weeks.  That attention is a double edged sword; sure it's free advertising, but many of Vinland's prospective customers will already have expectations before even walking through the door.

Getting to know David I've been quite impressed by his total commitment to making Vinland a reality, even though it's taken him years.  He's a very idealistic guy and it's reflected in his ambitious goals for his restaurant.  I've met few people with commitment and dedication like this.  Sticking to those ideals may have made the whole process more difficult than it had to be, but I respect that about him and it makes me hope he succeeds all the more.

The idea of using no olive oil, no pepper, no citrus, and no flour may sound wild at first but remember that many parts of Maine didn't have access to a supermarket until the 50s.  Looking at it that way olive oil is actually kind of a recent thing in parts of Maine.  What's so crazy about eating cod, pork, mussels, scallops, venison, turnips, potatoes, and parsnips?  The primary ingredients on the menu aren't really wild at all.  Working within this local philosophy may force Vinland to be more creative and use common place foods in novel ways. 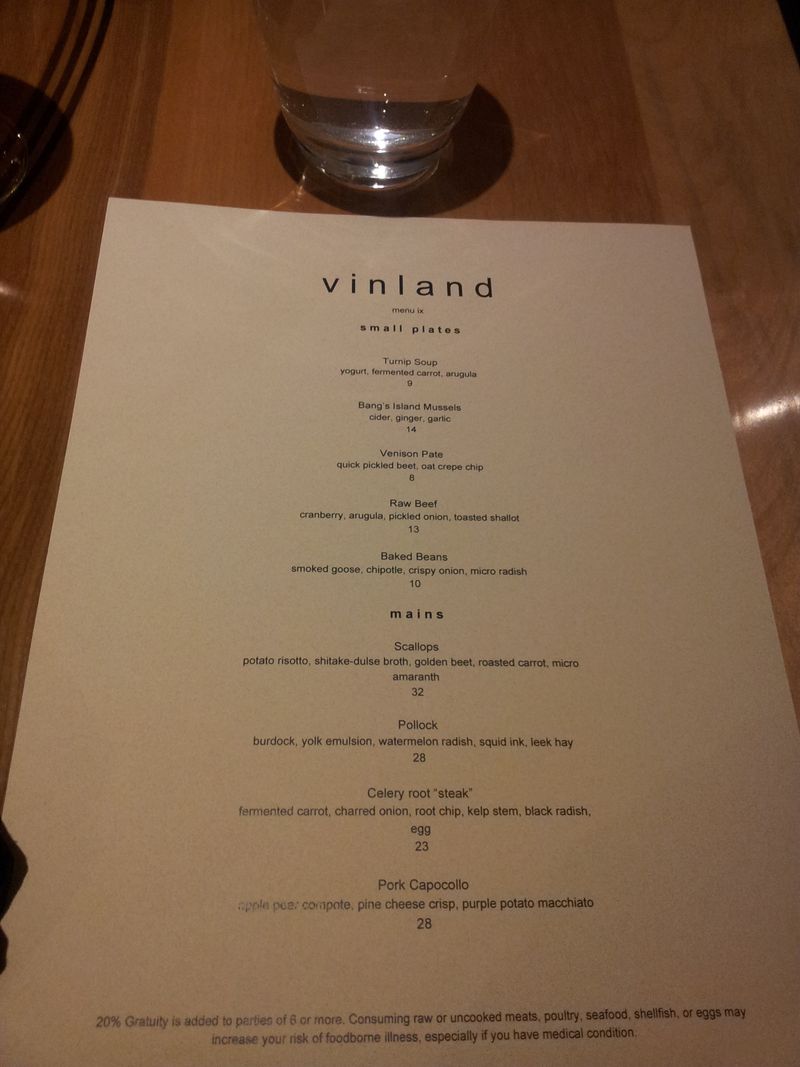 David built out the kitchen from scratch so first there were a series of soft openings to see what about it needed tweaking.  That's how it is building something from the ground up and I'm glad I got to see how their processes were adjusted. I have a rule to never judge a restaurant until it's been open at least a month.  Vinland isn't there yet, but so far the food I've had has been delicious, poignant, and satisfying.

Here's a run down of my most recent dinner at Vinland on the 23rd of January. 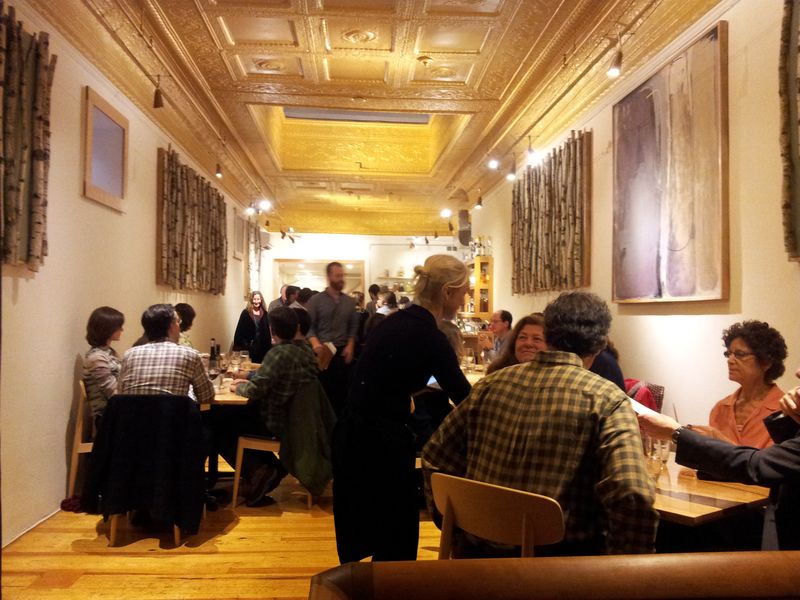 Shortly after my dinner guest and I were seated David came over to say hi.  He'd heard that my guest was pregnant and wanted to check to see if she had any special dietary restrictions as a result.  It was a nice kind of personal touch. 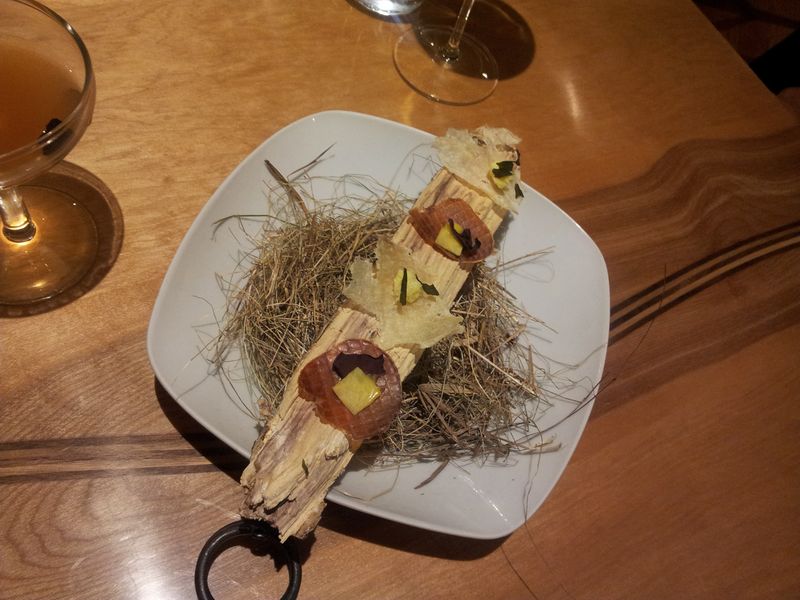 Before we'd ordered the kitchen sent out an little taste of dehydrated hake and scallop chips with dollops of butter and sea salt on top.  It's a traditional way to preserve and eat fish in Scandinavia where David did some of his cooking internships. I love butter and thought this, particularly the hake, was awesome. 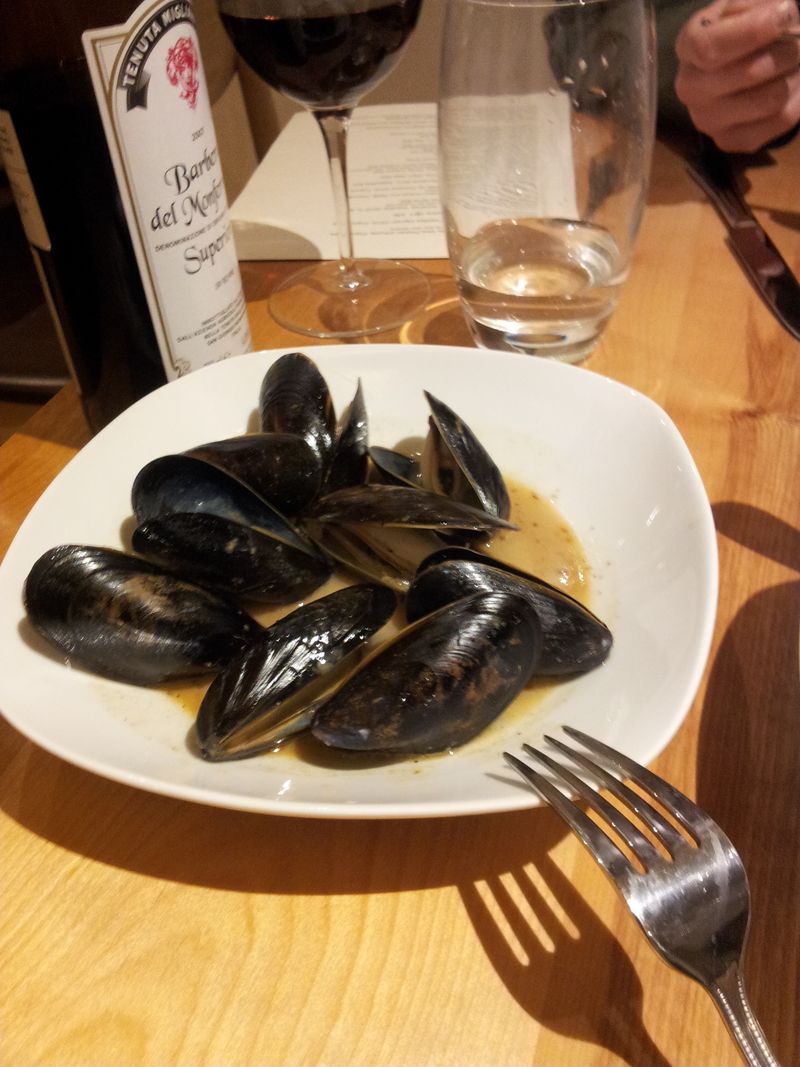 Vinland's mussels are one of my favorite on their menu.  Vinland serves them in a delicious cider ginger broth that's both rich and zingy-er than the broths that I'm used to.  My dinner partner and I also both noticed how large and meaty the Bangs Island mussels were. 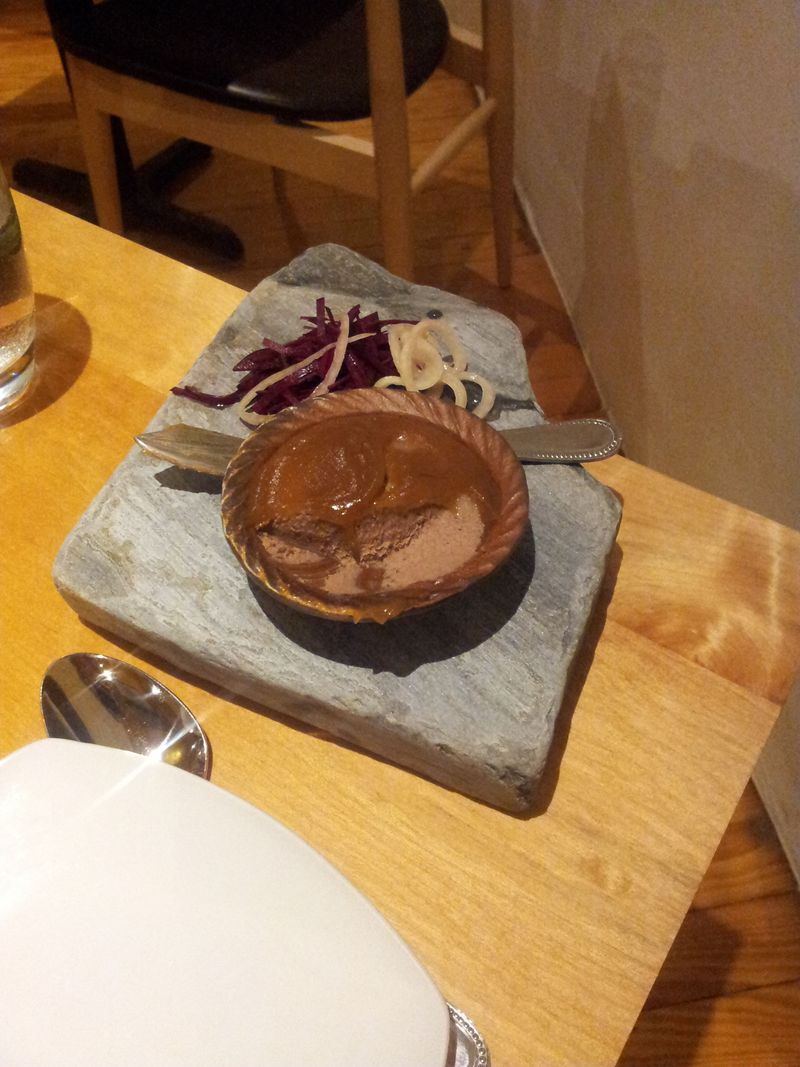 I had a venison pate for a starter that was meaty, gamey, and balanced by a sweet apple reduction sauce on top.  The sweet apple was perfect to balance the slight gamey livery flavor and it worked well all together. 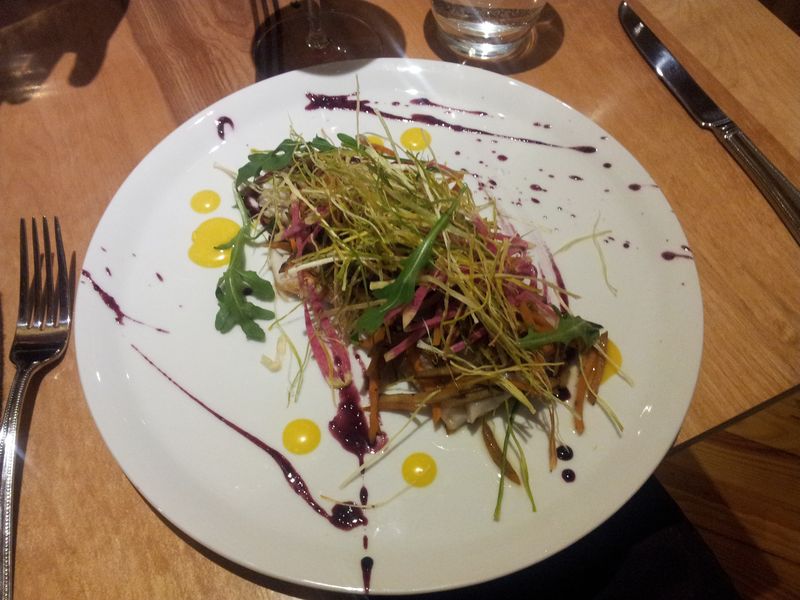 For a main course I had this local pollack served with all kinds of shaved burdock, radish, and dehydrated leek on top.  Pollack is generally a timidly flavoured fish but the egg yolk emulsion and all the flavours of the burdock and leek gave it a lot more depth and some fresh acidity.  It was a complex and more nuanced dish that was still very filling. 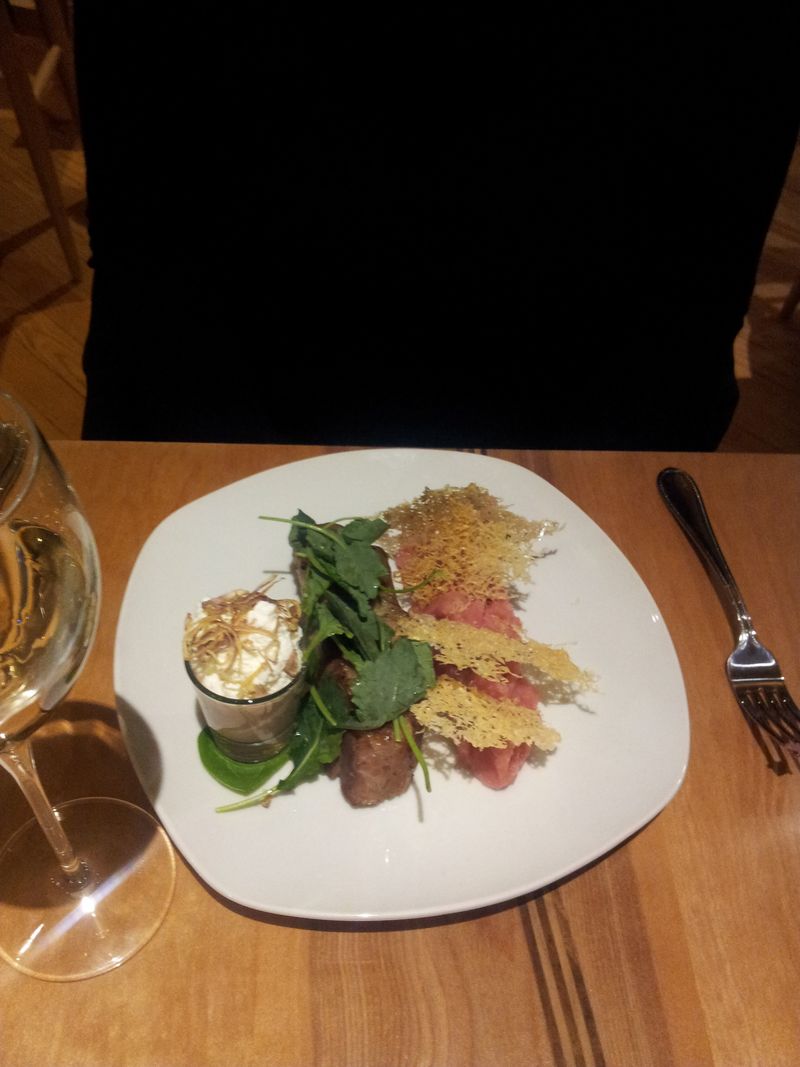 My dinner guest had the Capocollo pork steak.  It was fantastic.  I've had it a couple times and it's another of my favorites on the menu.  The pork is cooked very slowly at a very low temperature and then seared quickly to get the right texture to it.  Every time I've had it the meat has been perfectly cooked, still moist, and has had a bit more color due the low and long cook time. 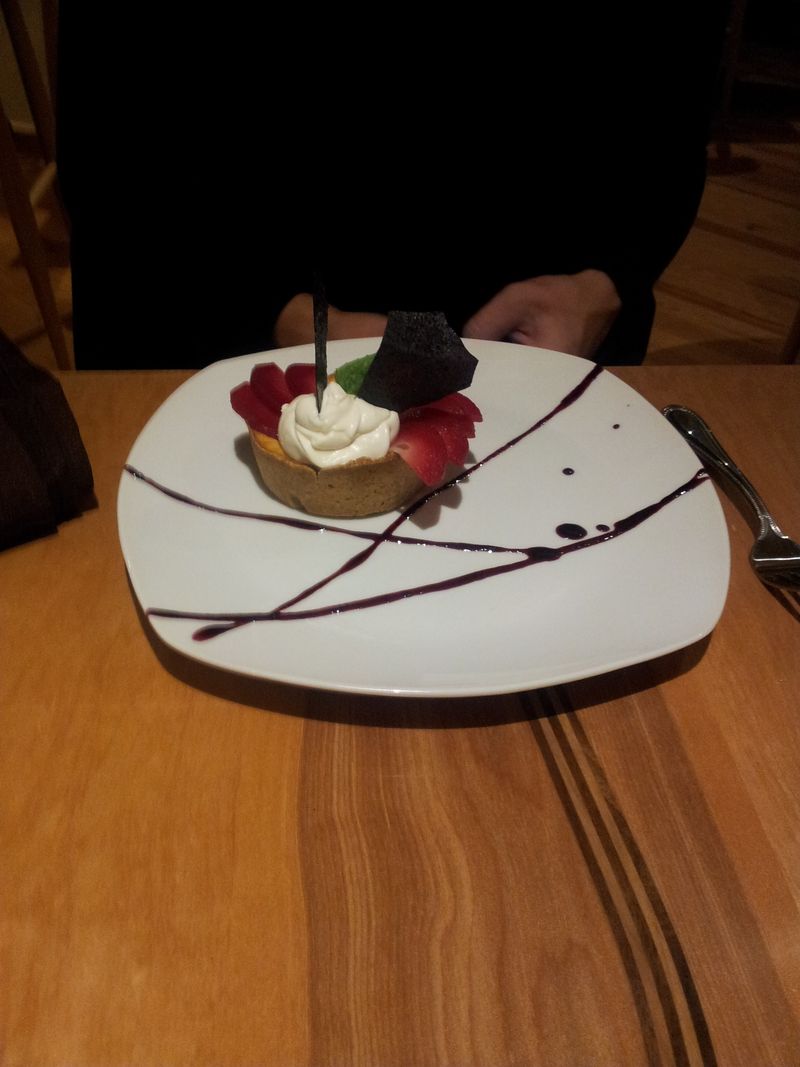 The Chevre cheese tart for dessert. 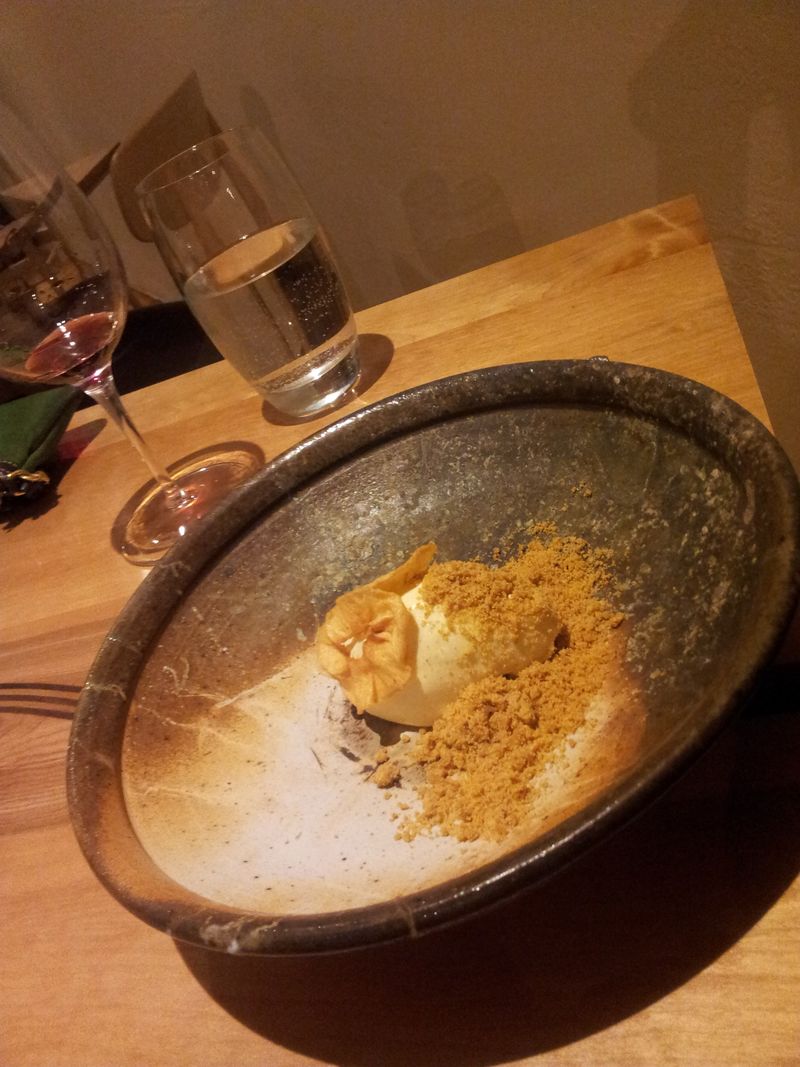 For dessert we had brown butter flavored ice cream and a tart filled with local chevre.  Dessert is one of the most challenging parts of the meal to make with all locally sourced ingredients; not being able to use flour or cheap cane sugar is tough.  However dessert seems to be a particular strong point for Vinland.  All the desserts I've tasted have had impressively creative combinations of flavors and been richly satisfying.

Bottom line for me is that David is an idealistic and passionate guy with some lofty goals.  I've had some really good food at Vinland and as the restaurant refines what they do it should keep improving.  David's put himself out there and sacrificed a lot to open Vinland, like all chef owners do.  I feel that when someone believes in something that strongly and invests so much of themselves into it, they deserve a fair open minded chance.  Chef owners as a rare entrepreneurial breed and I respect them all very much.  Vinland and it's philosophy is a great addition to Portland's fantastic food culture and it's something you should go and make up your own mind about.

Domaine Bordes is a small domaine owned and operated by Emma and Philippe Bordes in Saint Chinian, Languedoc.  Philippe grew up in the area but moved away to work as a plumber.  In 2000 he and Emma decided to move back and purchased 10 hectares of old vines planted in the small hamlet of Tudery, up on the slopes above Saint Chinian.  Their soils are an unusual mix of sand, limestone, and shale that give the winery certain advantages; particularly that sand is a very inhospitable environment for phyloxera!  The Bordes are very lucky to have a plot of Carignan vines planted in the sandy soil that are ungrafted and over 100 years old!  Philippe and Emma Bordes farm organically and ferment with wild yeast.  They add nothing in the process of making this natural wine. 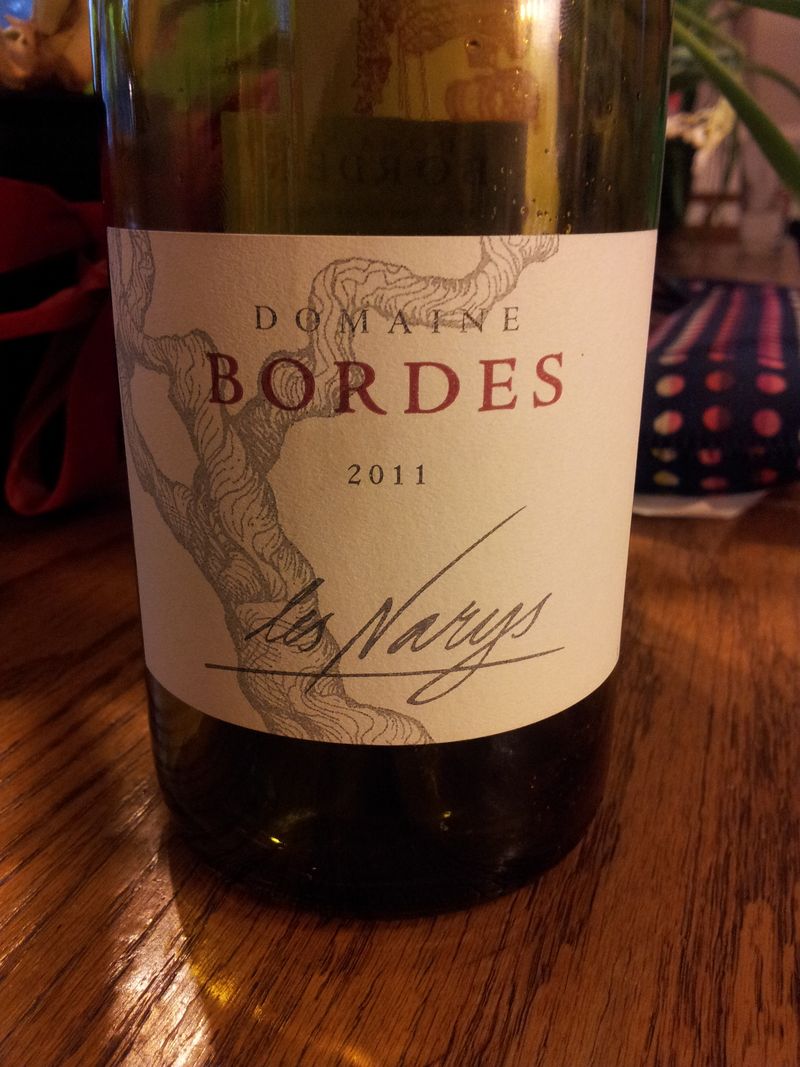 Varietals: Domaine Bordes' Les Narys Saint Chinian is made primarily from Syrah, but with Carignan and Grenache blended in as well.

Aroma: The Bordes' Saint Chinian smells intensely of dark fruit.  There's lots of currant, vivid black cherry, black raspberry, and blueberries here.  There's a wild, exciting, racy kind of smell to it too.  I don't know, but the slightly spicy aroma makes me think that the grapes weren't all destemmed, meaning some of those stems made it in to the wine and give it a woodsier smell. 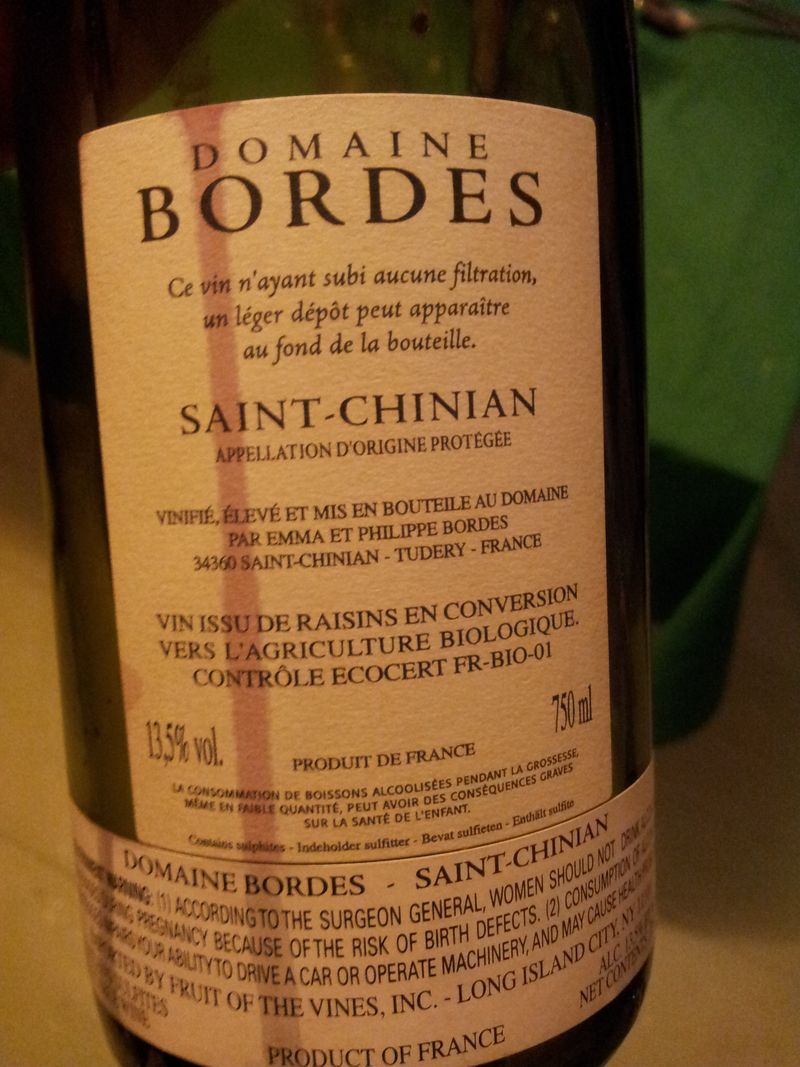 Palate: The Bordes is not at all what I normally expect from Saint Chinian!  It's big and dark, kind of wild, but the texture is lush and sexy.  There's more blueberry here than in the aroma.  Lot's of layered voluptuous Syrah fruit interwoven with black pepper, and then the finish turns more wild and rustic, just enough to let you know this means business.

This is rich, delicious, and luxuriously textured; the Bordes Saint Chinian and a rib eye is my plan for the night!  This is available at the Rosemont Markets, Browne Trading, Cafe Miranda, Jesse's Seafood Market, Neighborhood Health and Herb, the Old Port Wine Merchant, and Bandaloop.