Chateau d'Oupia is a 13th centurey castle and estate in the south western French area of Minervois.  Andre Iche inherited the domaine decades ago and although he sold his wine off to other companies to blend and bottle, he took pride in doing the work himself and never joined the local co-op.  15 years ago a wine maker from Burgundy visited and was so impressed at the quality of Andre's wine that he convinced him to start bottling himself.  Andre jumped in with gusto and hasn't looked back. 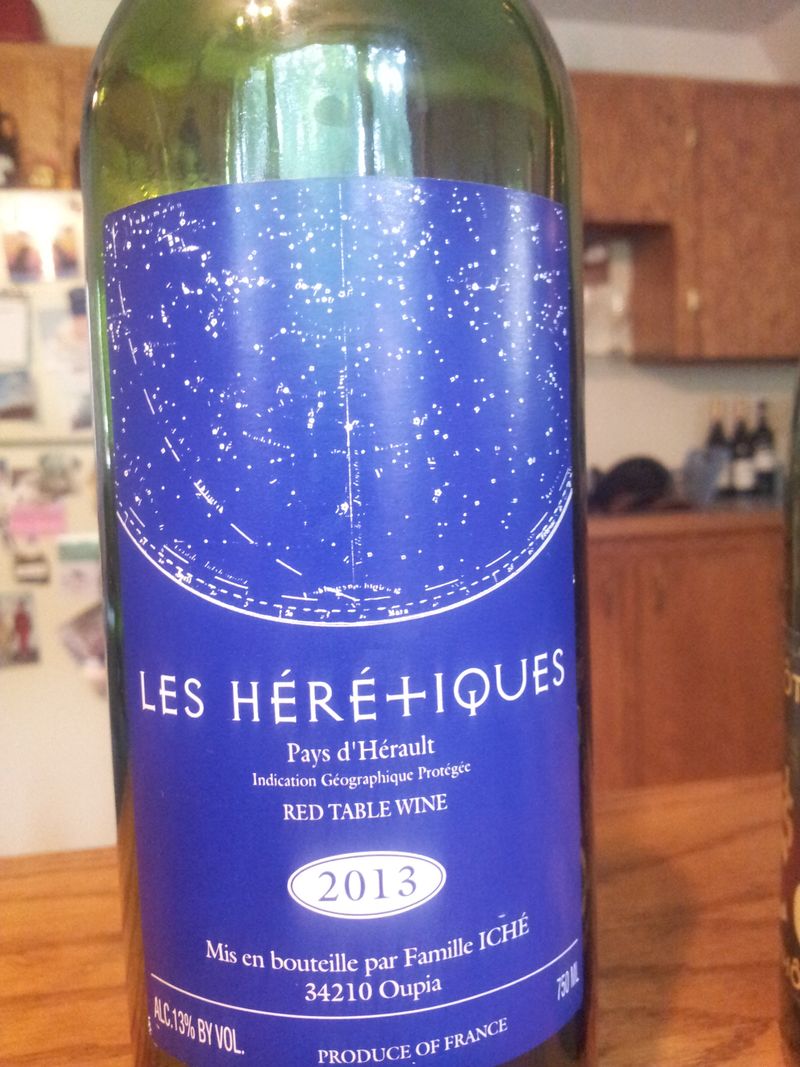 The Heretiques is 100% old vine Carignan.  Half the fruit goes through whole cluster carbonic maceration while the other half is fermented in barrel with a 30 day maceration.

Aroma: The Oupia Heretiques has a bright fresh fruity aroma.  There's lots of fresh cherries, raspberries, and it's dense enough smelling that I'd say raspberry jam as well.  It smells fun and lush, with just a hint of somthing dark and deeper.

Taste: Yum.  Yes, it's that kind of wine.  Juicy, fruity, round, medium bodied; this is a fun straightforward tasting red wine.  The Heretiques isn't that complex, but it's a very nice mix of smooth texture, tasty berry fruit, and supporting acidity that makes it refreshing and light on it's feet.  In fact the acidity gives the wine just enough verve to make the berry flavors more vivid and nicely tart seeming.  This is delicious authentic southern French summer red; it's refreshing and easy drinking but still with a unique slightly rustic character.

This is a great deal at around $11 retail.  The Heretiques is available at the Blue Hill Wine Shop, Flock and Vine in Cape Elizabeth, Great Cranberry General Store, Rosemont Munjoy Hill, Rosemont Commercial St, the Cheese Iron, Morning Glory Natural Foods, Wind and Wine in Bar Harbor, and Vic and Whit's in Saco.

Muscadet is one of those wines that most people have heard of, but that not many know much about.  It's a wine that doesn't get the respect I think it deserves.  I've had some great Muscadets and visited the appellation, though, so I'm rather positively biased towards.  The reason most Muscadet tends to be over looked is because there's so much that's mass produced to be simple, inoffensive, and lack character.  Luneau Papin's "Pierre de la Grange is not one of those Muscadets.  In fact after re-tasting it I'm comfortable saying this is the best Muscadet I've ever had!

Muscadet is a wine that should play particularly well in Maine.  It comes from the Atlantic coast of France where the Loire river hits the ocean.  As a result the local cuisine is very heavy on seafood like oysters, mussels, flounder, and mackerel; Muscadet has evolved to be perfect with those seafoods.  Since Maine is also on the north Atlantic Muscadet is just as perfect with the seafood we're famous for.  I can't imagine a better wine for mussels or oysters than this.

Pierre Marie Luneau is the 9th generation of his family to head the domaine.  They are a larger estate with over 100 acres, but that land is broken up into different holdings and Pierre Marie makes wines from them separately to preserve the land's character.  Another factor explaining this wines unusual awesomeness is that Luneau Papin's vines are on the older side, averaging 40 years old with some as old as 65.

Aroma: Luneau Papin's Muscadet smells gorgeous!  It's got a good combo of ripe fruits and aromatic flowers.  I clearly smell white peach, rose, grannysmith apple, and sweet white flowers like vibernum.  The aroma is so vital and zingy smelling that you immediately know the wine is going to be lively and grab you.  The aroma is classic Muscadet, but the Pierre de la Grange has them more strongly than any other Muscadet I've tasted.  That's what lower yields and a focus on preserving terroir will do.

Taste: Yes, the Luneau Papin is just what you'd expect and anticipate from the aroma.  It opens with a mouth watering lemon limey fruit, building up to a mid-pallet that has just a hint of a prickly effervescence, And then this briney salty minerality sneaks in that really reminds me of the ocean. The body and texture are so much more refined and confidant than I expect from Muscadet; it's delicious.  The Muscadet lingers on with an elegant sort of a green apple flavor.  Again, this is classic Muscadet, but the flavors are so much more developed than in normal simpler Muscadet.  It's clear why Luneau Papin is considered one of the top producers in Muscadet and I'm glad to have this wine in Maine.  It should change a lot of people's opinion of Muscadet!