Bugey is a lesser know appellation in eastern France formed by a group of low hills at the southern edge of the geographic formation that creates the Jura.  Distance wise Bugey is closer to Savoie so Bugey sometimes gets lumped in with it, but Bugey really has it's own character separate from the other near by wine regions.  Bugey has been known for making sparkling wines that were popular in Lyon and formerly in Paris, but they have slowly faded from France's national consciousness and aren't so common any more.  A quick fact is that in the 19th century there were 7000 hectares of vines in Bugey, now there are 500. 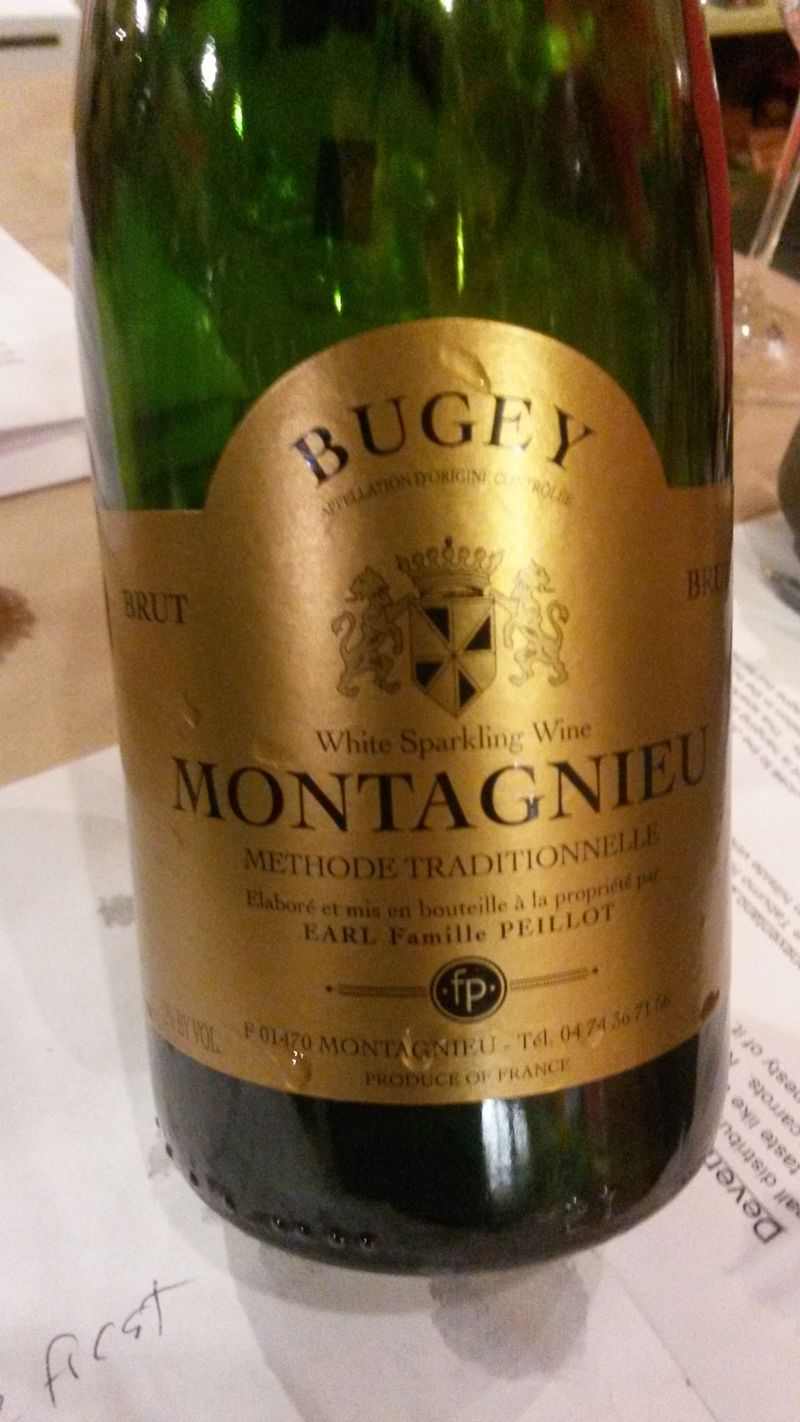 Franck Peillot is the fifth generation of his family to make wine on their 6 hectares of land outside the town of Montagnieu.  This is a blend of Altesse, Chardonnay, and some Mondeuse (a red grape) that Franck often actually co-ferments with the Chardonnay.  Franck tries to do his fermentation using the natural yeasts on the grapes and is successful about 90% of the time.  He adds a very small amount of sulfur at pressing, and then another small amount to stabilise at bottling; it still ends up being magnitudes less than a normal wine.  Read more about Franck and Bugey here on the excellent Wine Terroirs Blog.

Aroma: Peillot's Bugey has a fresh lively and pleasant aroma of lemon zest, peach, fresh white grapefruit, some toast, and a ripe apple aroma that seems like golden delicious to me. It smells fun, focused, and energetic.

Taste: There's a focus to Franck's Bugey that is similar to good non vintage Champagne, but not quite as sharp.  His Bugey opens with a dry edgey effervescence first, but then on the mid palate there's a fresh pineapple flavor that pops up before subsiding back into more of a rich, gentle, palate enveloping toasty creaminess.  This sparkling wine is dry, but it's not as bone cuttingly dry as many mass produced Champagnes can be.  It feels like it's not quite as highly pressurized as Champagne and that must help it seem a bit softer.  At the same time the Bugey is so much more balanced and integrated than any Prosecco I've ever had.

Franck Peillot has made a delicious, fun loving, and very elegant sparkling wine that costs about half the price of Champagne, plus it's hand made to boot, unlike most cheap Champagne.  This is priced in the mid $20s and is available at Browne Trading, Flock and Vine, Rosemont on Brighton Ave, Aurora Provisions, the Cheese Iron, The Farm Stand, and the Bier Cellar.