A big part of our job as wine wholesalers that represent small wineries around the world is being able to pass on the stories of the families and individuals that make our wines.  Devenish focuses on wines that are special because of the people that have poured their energy and passion into them, and because the wines honestly taste like the environments where the grapes were grown.  The story and the context are very important, but the wine makers aren't here themselves to pass that info on.  That's where Devenish comes in. 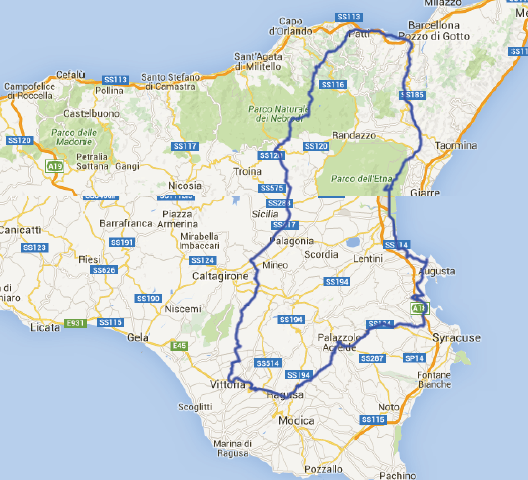 Above is my tentatively planned route for Sicily

I can't think of a better way to really get to know the land and smells and how the sunshine of a place feels than just really being in it and immersing myself in it.  So that's why I'm going to run across Sicily next month.  In the space of 8 days, starting on February 20th, I'm going to run approximately 400 kilometers in a loop up and down Sicily's east coast and around Mount Etna.  I ought to know the topography well after stumbling up mountains!  And gasping as I climb hills ought to really make me appreciate Sicily's air.  I'll be starting by visiting Frank Cornelissen and Passopisciaro up on the north slope of Etna, and then making a long southern leg down to visit Arianna Occhipinti in Vittoria down south. 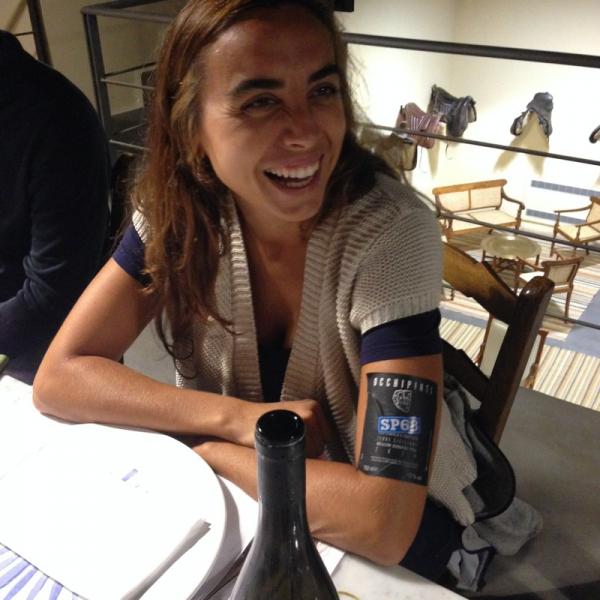 A picture of Arianna Occhipinti from Rachel Signer and Louis Dressner 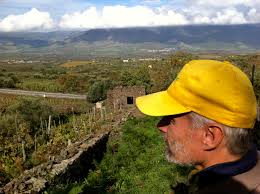 Here's a picture of Frank looking out over some of his vineyards.

Founded by Maurice Regnier back in the 60s with 2 hectares, Regnier David pioneered organics in Saumur back in the 70s.  In 2002 Maurice's 20 year old son, Jean Francoise, took over farming and wine making responsibilities and has slowly grown the domaine to it's current 13 hectares.  Father and son have stuck with a dedicated focus on traditional grape varieties and heritage clonal selections of them, propagated as cuttings from other local old vine vineyards. 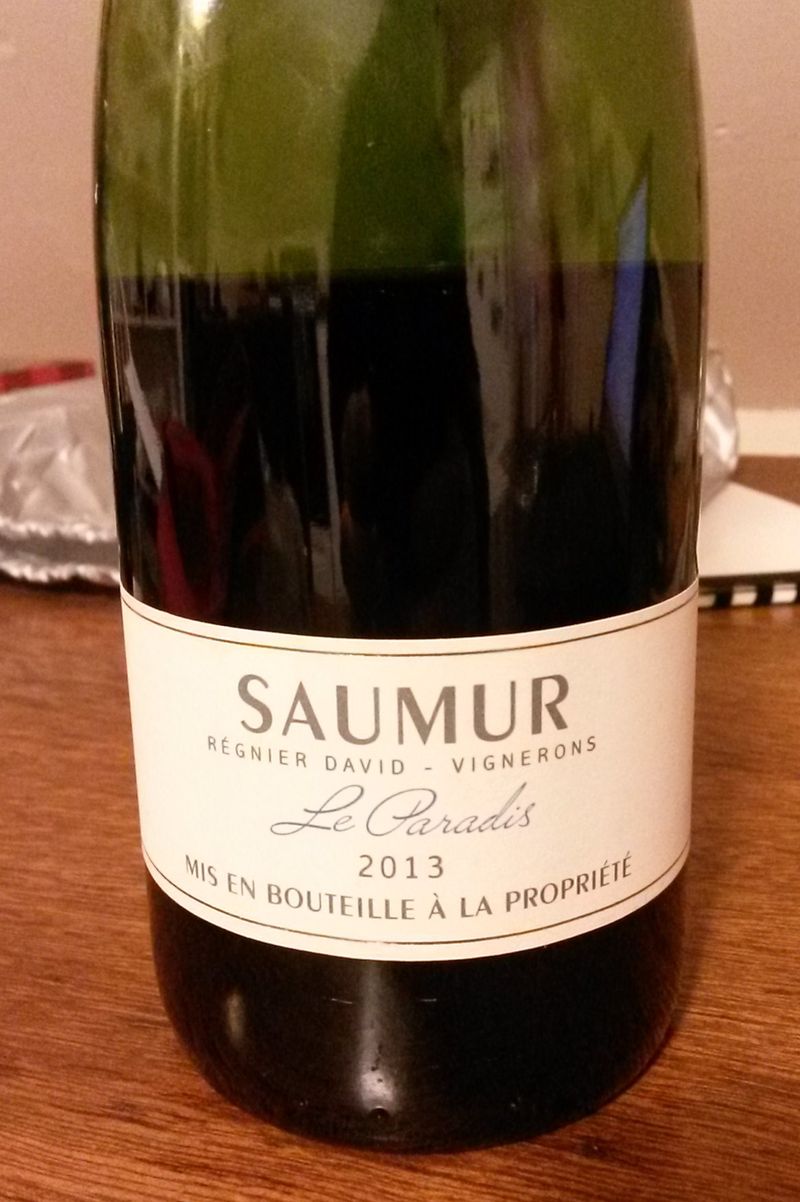 Jean Francois' Saumur Rouge Paradis comes from a micro AOC called Puy Notre Dame that was created in 2008.  This is a 3 hectare vineyard of 45 year old vines, farmed biodynamically, and with solid southern exposure.  5000 bottles are produced each year.

Aroma:It's got that cranberry, cherry, hint of roasting coffee, wet grass combination that is pure honest Loire Cabernet Franc to me.  I love Loire Cabernet Francs that smell like ripe juicy fruit, savory earth and chocolate, as well as spicy leafy plants all at the same time; talk about a cool juxtaposition!

Taste: The Regnier David Saumur at first tastes bright and straight as an arrow of crisp pure acidity, but then the mid palate opens right up with this juicy giving, lusher than expected Cab franc fruit.  There's just the right amount of tannin on the finish to pull the wine together but it's in a supporting role and very nice.  The mid palate has a rich earthy-bittersweet chocolate quality that's delicious and rare; most Loire Cabernet Franc doesn't get ripe enough to develop it.

This is delicious and special Cabernet Franc that is very authentically Saumur and not Bourgueil or Chinon.  It's ok if you don't know the difference.  Just get a bottle of this and it'll all make sense.

Regnier David's Paradis Saumur will retail for about $19 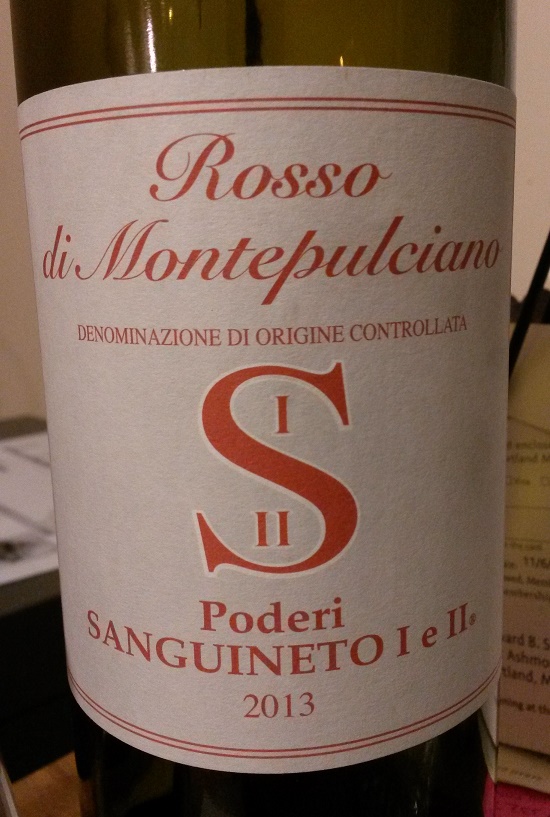 Aroma: Sanguineto has a reputation as one of the best truly classic Montepulciano producers and this sure smells like it.  The aroma is a beautiful deep hearty dried cherry ,black pepper, candied licorice, black currant, and meat searing on a wood fire.  Yeah, that all sounds kind of particular and fanciful, but this is a hell of a wine.  Sanguineto to me is about the tops of what serious, deep, old school Sangiovese can be.

Taste: There's more fruit but also more hardness and shell and structure the way that this drinks than what the aroma leads me to expect.  There's good acidity, like you'd expect from Sangiovese, but the acidity is constrained by tannic structure that holds it all together.  It's very much cherry fruit but with a lot of spice.  To me the Sanguineto particularly tastes like baking spices: coriander, black pepper, some nutmeg.  This also has a really serious mineral salty tasty, earthy componant to it.  Sanguineto's rosso really isn't very fruit driven and I'm glad.  It showcases so many of the other flavors that Sangiovese can take on, but is usually made and bottled to young to display.

Sanguineto is really a tour de force of Sangiovese.  The last time I got any was 2 years ago and I could only get 8 cases this time around.  Cherish this wine.  Sanguineto retails for about $28 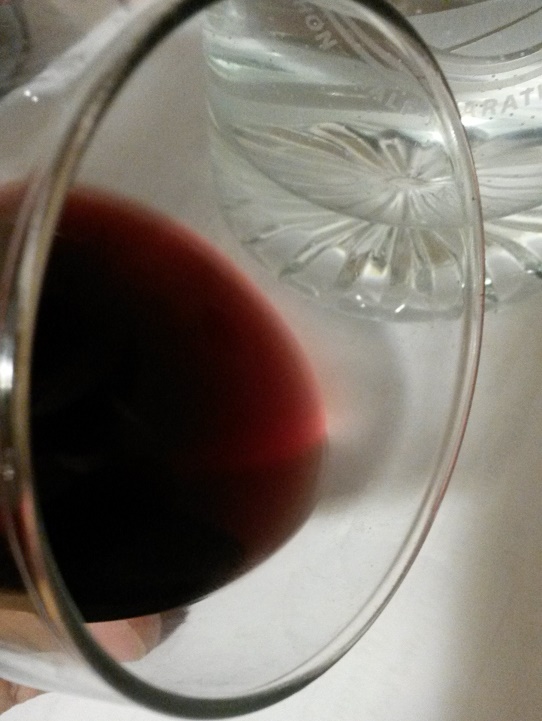 Chastelet is a smaller (17 acre) winery at the edge of the Bordeaux appellation.  Although Chastelet is only just south of the actual town of Bordeaux, most all the famous red wine that the world associates with "Bordeaux" is made north of the town or to the northeast on the Dordogne.

The owners of Chastelet, Valerie and Sylvere bought the estate in 2008 and did the conversion to biodynamic practices.  Sylvere had previously been a chef and Valerie an interior designer.  Most of Chastelet's vines are 30-50 years old, but some are as old as 70 years.  They use just 2 grams of sulfur per hectolitre at bottling which dissipates to generally zero detectable sulfur once the wine is consumed.  Chastelet produces 17,000 bottles per year. 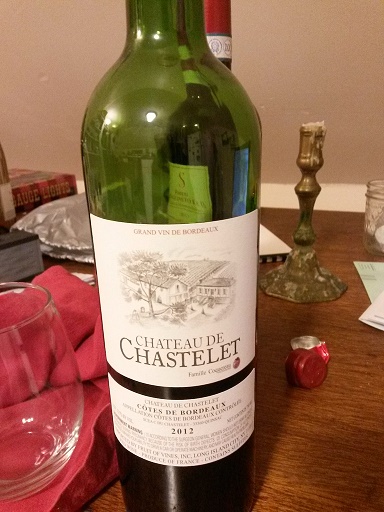 So Chastelet is in an a literal and figurative backwater, but that's what I like: finding things that are different or that other people have over looked.  The winery has a lot of 50 year old vines and in addition to Cabernet Sauvignon, Merlot, and Cabernet Franc they also grow Malbec and Petit Verdot.  Chastelet farms using biodynamic principles (very rare in Bordeaux) and lets the varietals ferment in open top fermenters.

This 2012 Cotes de Bordeaux is about 2/3 Merlot and 1/3 Cabernet Franc.  It spends about months in older oak barrels to allow the wine to breath and mellow, with out adding overt oak flavors to the wine.

Aroma: I right at first whiff get some of that cedar wood/spice/earthy aroma that gets called cigar box.  There's also a pretty strong dark baking chocolate kind of aroma as well.  The Chastelet smells less fruity than I'm used to but it smells like a cross between a wood shop and a chocolate store in a great way.

Taste: Fresh bright tart cherry and raspberry right up front and then this kind of clear, smooth mid-palate.  The Chastelet doesn't have much in the way of tannin and I like it that way, it works.  the over all body of the wine is light so I don't really want much tannin, there's just the gentlest touch there that kind of draws the curtain on the taste evolution in you mouth.  The acidity makes the wine taste alive, but it also has a softness and a component of ripe fruit to the mid-palate.  This is a rather unique tasting Bordeaux to me, but it comes across very clear and clean and delicious.