Collecapretta is an old family winery in central Umbria in the little town of Terzo la Pieve.  It's close by the slightly less obscure town of Spoleto which lends it's name to the particular version of Trebbiano that is grown here; Trebbiano Spoletino. 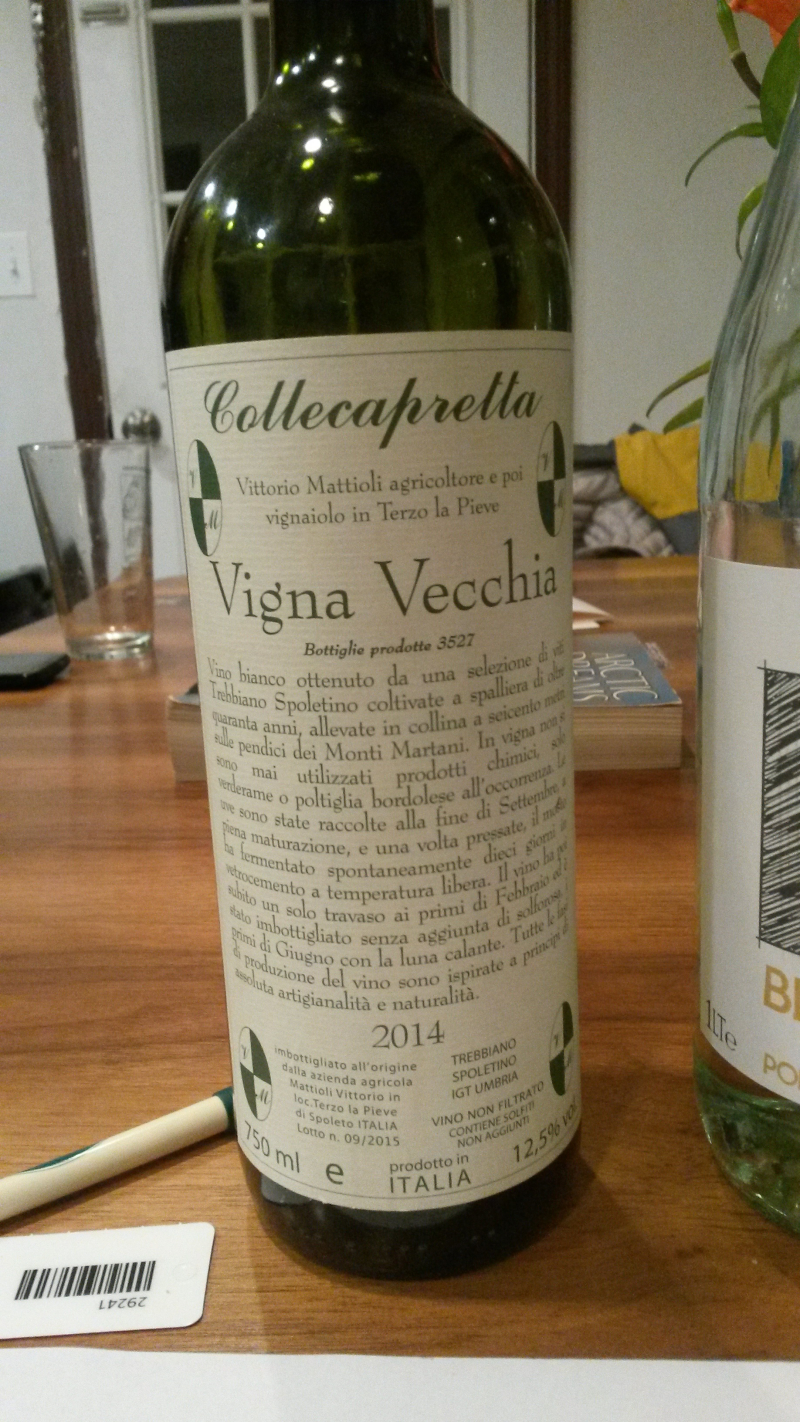 This wine made me throw out all my preconceived notions of what Trebbiano is and can taste like.  I'd never had a Trebbiano like this before; it has almost nothing in common with other mass produced expressions I've had.  The Mattioli pretty much lays it all out of the label.  This is Trebbiano Spoletino from vines over 40 years old, farmed without chemicals, in a vineyard 600 m above sea level, harvested at the end of September, fermented with natural yeast in Cement tanks without temperature control.  It was only racked once and then bottled without any added sulfur, at the beginning of June and in accordance with the lunar calendar.  Wine's don't get much more up front than that. 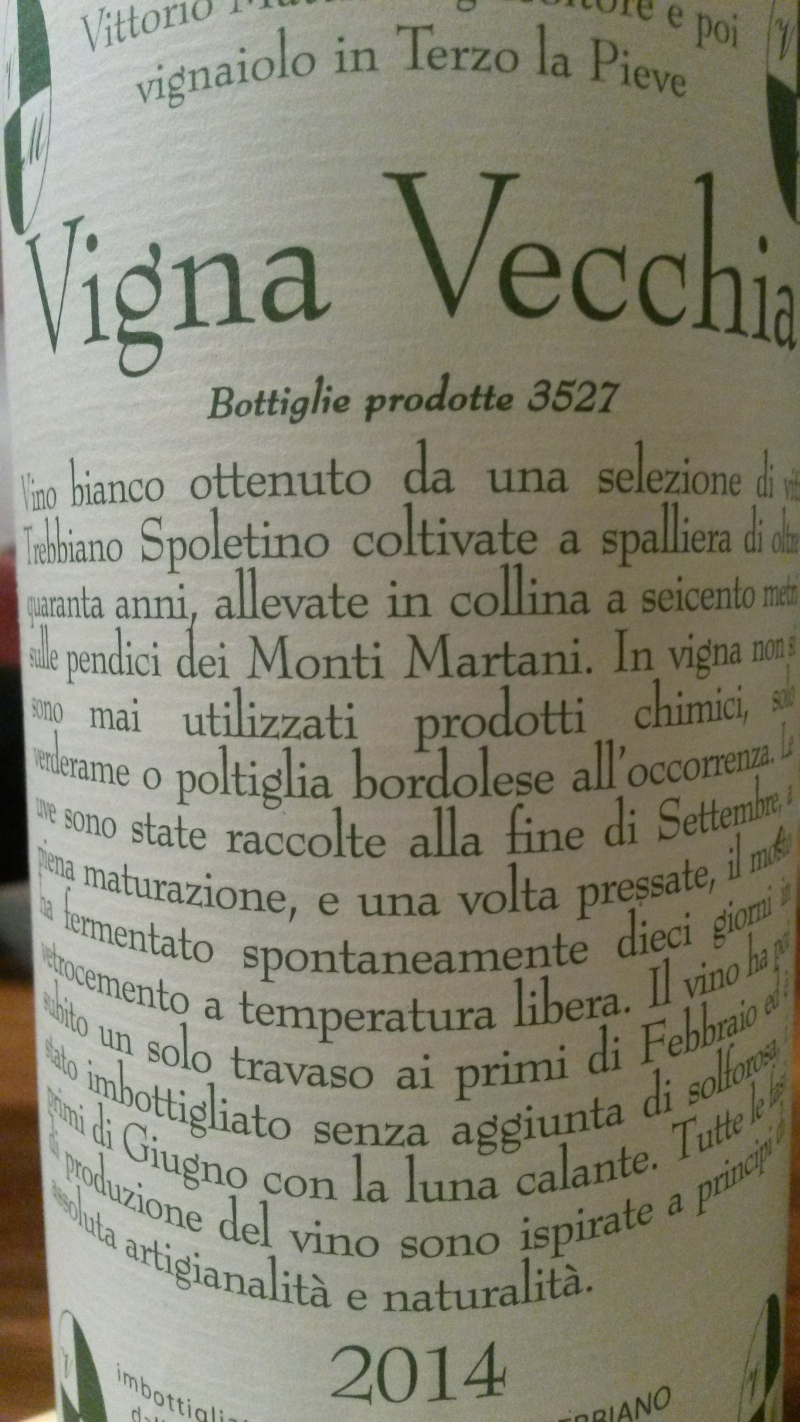 The Vigna Vecchia is a bit hard to write about because it is such an interesting wine and so many of the flavors just aren't similar to many things that are common in Maine, but that just makes it more fun!  This wine saw about 5 days of skin contact.  Interestingly the family makes another bottling under a different name that is essentially the same selection of grapes, but without skin contact.

Aroma: The first thing that hits my nose is actually bees wax; then I smell honey, orange peel, marmalade, and cooked peaches.  There's a lot of tropical fruit to the aroma, but there's also a lot of earthy rich waxy aromas too.  Beeswax and cooked fruits that have peels to them were the closest I could get.

Palate: The Vigna Vecchia is definitely a bigger white with some serious texture to the mouth feel.  It's personality comes across as relaxed, but it has good acidity that makes it lively and fun on the palate.  There are tastes of peach and also papaya in the way that papaya is tropical but earthy at the same time.

This is just a brilliant delicious wine to drink.  It's awesome that this has so much presence and flavor but is only 12.5% alcohol.  Collecapretta made just 3527 bottles of the Vigna Vecchia and I really highly recommend trying it. 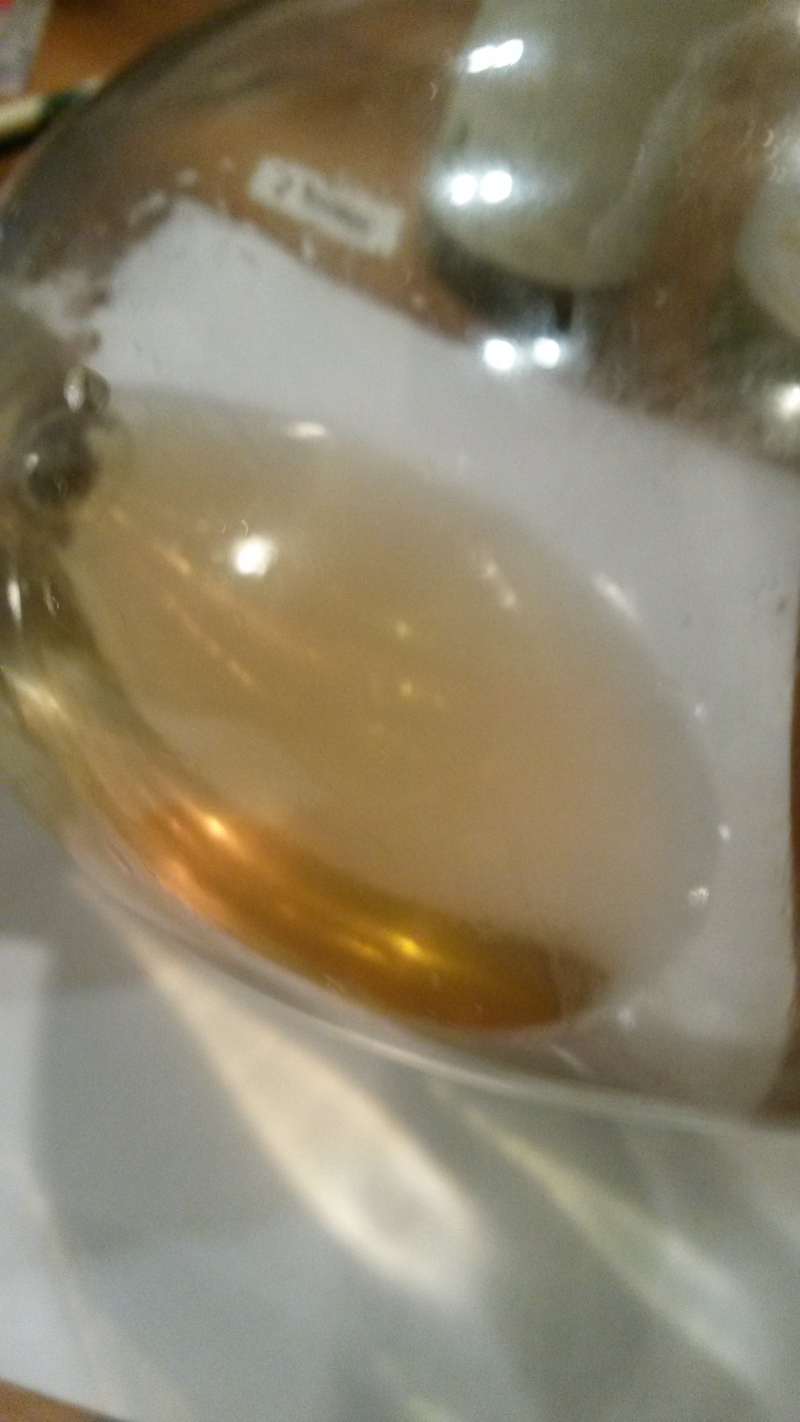 Ribela was the very last stop on our trip.  We drove through the Appenines from Abruzzo into Lazio and to Rome.  Danielle and his wife bought a teenie tiny 3 hectare spot in a little pocket sized valley in Frascati.  They have 2 ha of vineyard and 1 ha of olive trees plus assorted other fruit bearing plants like cherries, apricots, apples, and peaches.  The previous owner was retiring and had owned the vineyard his whole life.  He never sprayed it or used pesticides so as far as Danielle knows the vineyard has never ever been sprayed. 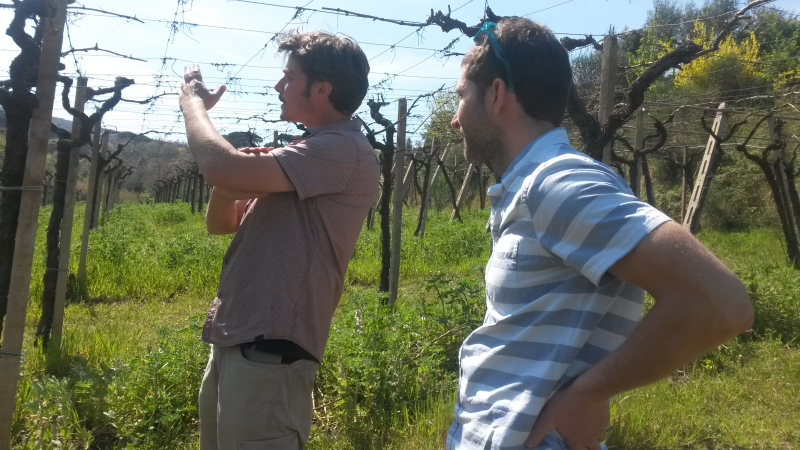 Danielle talking about training the vines on the old traditional over head pergola system.  He said that Although it can make the vines more productive with proper pruning yields are still low.  And working upright with a canopy over your head instead of bent over all summer in the Roman sun is a huge plus when you spend all your time in the vineyard like he does! 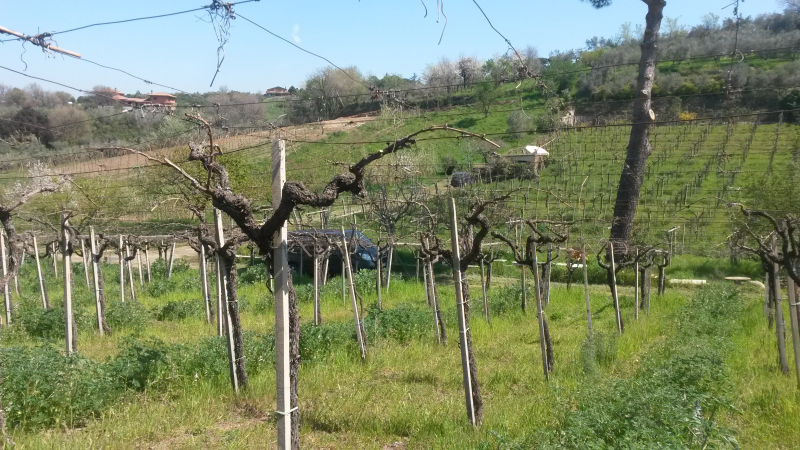 This is the view from the slope on one side of the tiny valley looking across.  Vines are planted down in the center with fruit trees here and there.  Then the olives are up on the tops of the valley sides. 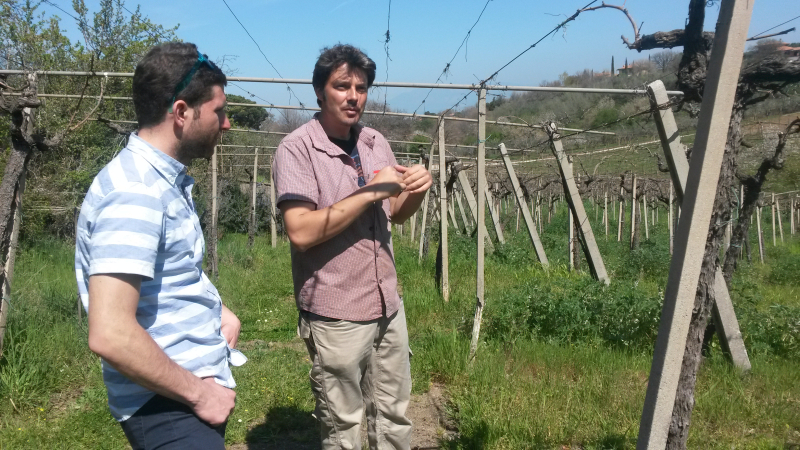 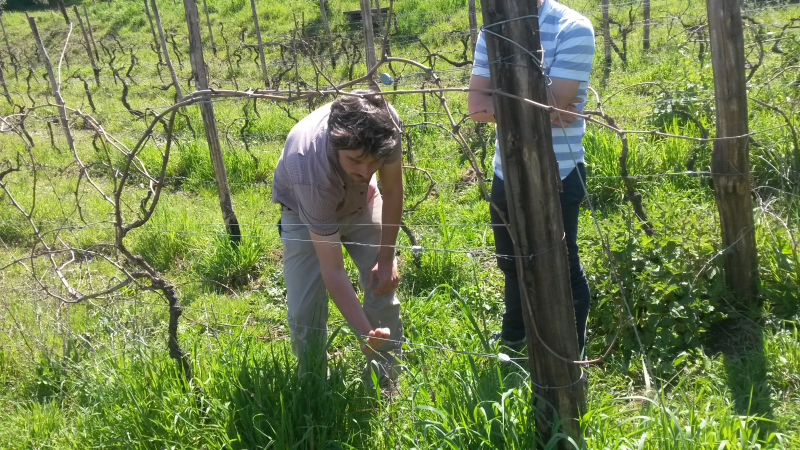 Over the winter Danielle intentionally hadn't pruned this vine back so much because the vines on either side had died.  So in a few weeks he will take those long branches he left and bend them down into the ground on either side of the vine.  Those branches will put out roots and eventually hell be able to cut the stalk connecting it back to the original plant and in this way hell have two new vines to replace the old ones.  This is the ancient way of Replanting a vineyard called Massale in France.  It gives you vines genetically identical to the original plant.  That preserves the unique varieties of Trebbiano and Malvasia that he has in his vineyard as opposed to buying vines from a nursery which would be more common bred clones. 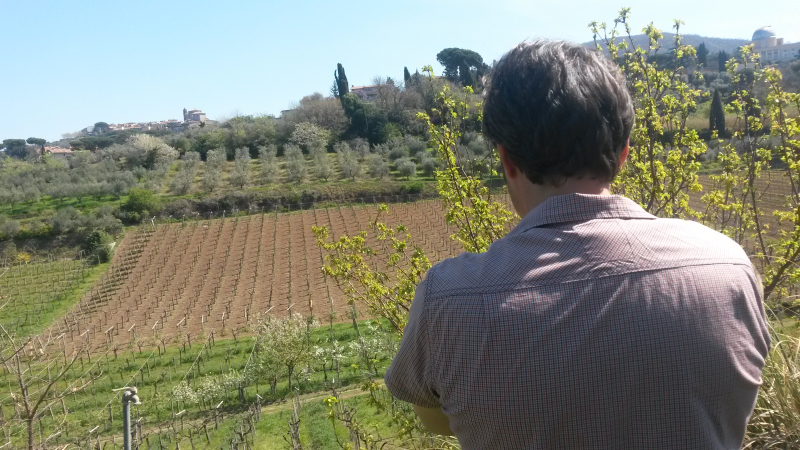 Danielle uses no pesticides.  But he doesn't own all the valley.  An old woman owns about another ha and she farms conventionally.  Her's is the brown vineyard patch with no other plants.  Danielle's are all the green living ones. 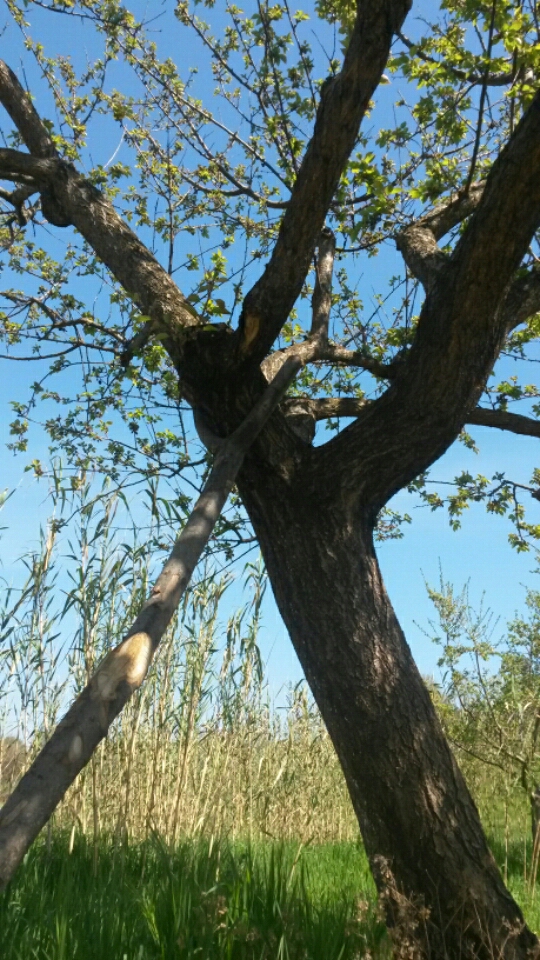 An old apricot tree propped up with another branch. 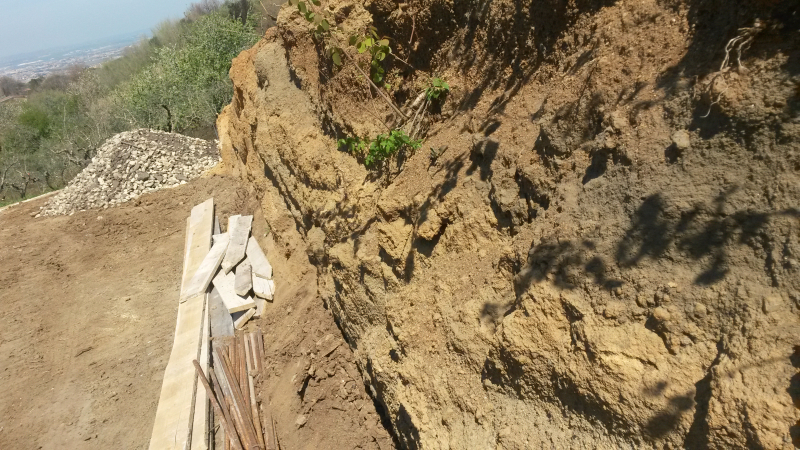 Danielle and his wife have only been here for 3 years.  So they don't actually have a winery yet.  This coming week though they're breaking ground on building a little winery and house for themselves here in the vineyard.  Danielle used to be an architect before getting fed up and deciding to become a farmer so at least it was easy to lay out the building.   You can see volcanic sand in the excavation here.  It's rich rocky soil with volcanic matter mixed in. 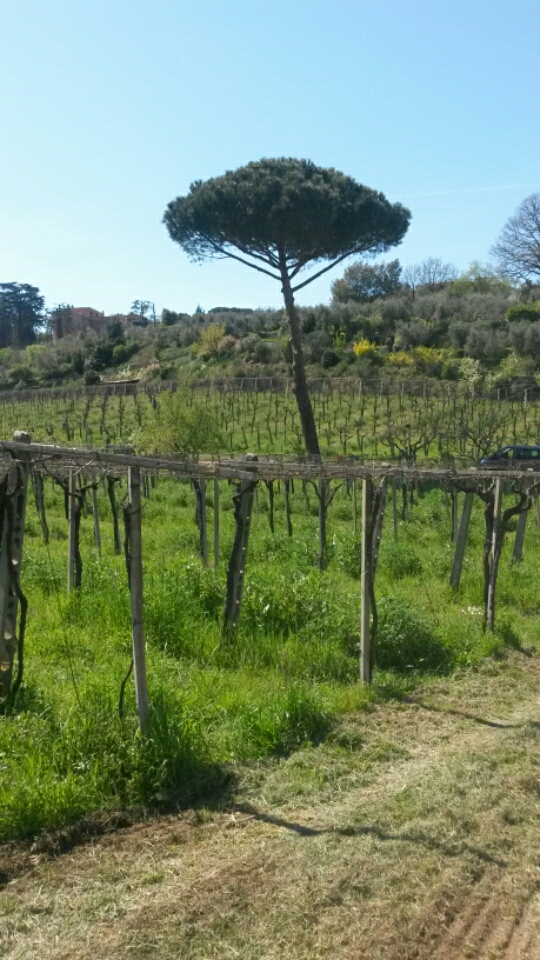 Another view across the valley.  Maybe 1000 years ago it had a little stream through the bottom but over the centuries the stream has sunk and is now a subterranean flow about 100 m down. 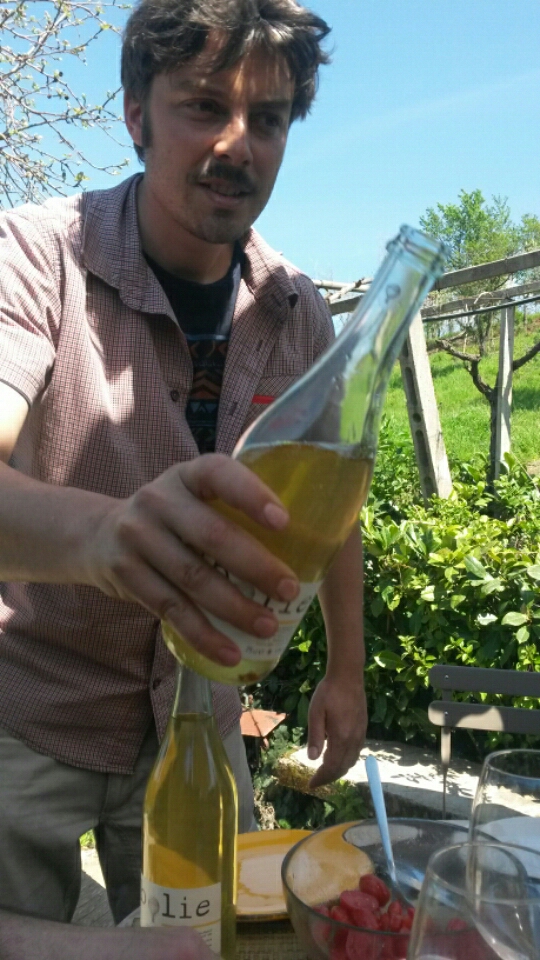 Danielle pouring the 15 and 16 vintages of his sparkling Ribolie 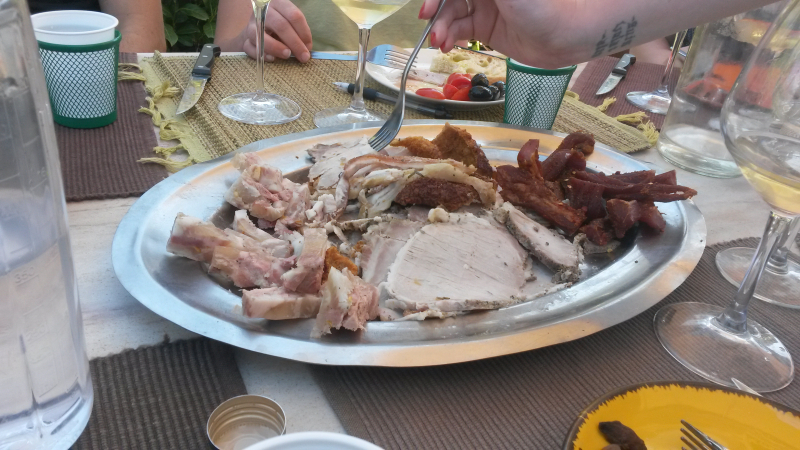 He only had a tiny one room building to work out of but the food he had put together was amazing. 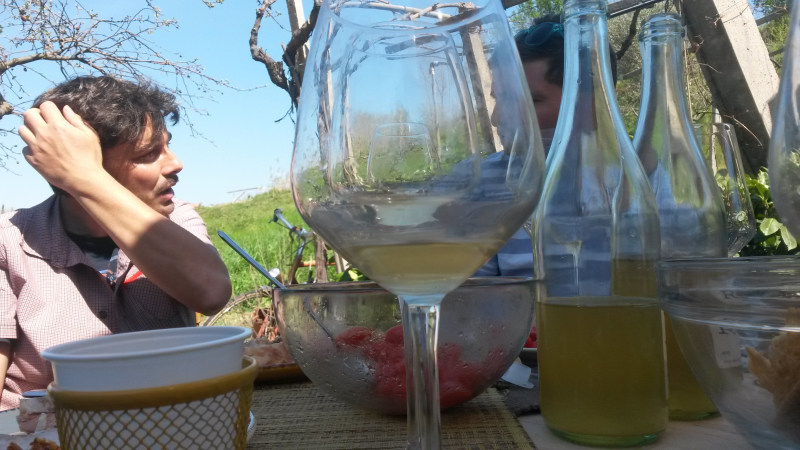 This is his Cesanese red. 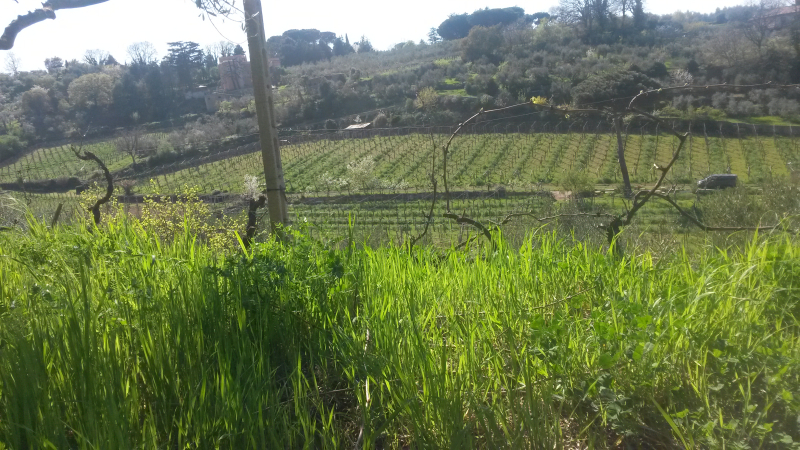 I climbed up onto the very top of the hill side above the vineyards and into the olive trees.  It's a quite, sunny, tranquil little hidden spot.  It was crazy to be in such a beautiful peaceful space and still be able to look out over the hills and see the craziness of Rome in the distance!   In the olive grove up on top of the hill all you could see was more olive trees and the vineyard below.  It was easy to imagine it could have been this way 2000 years ago.