Frédéric Sornin makes this wine in conjunction with his 13 year old son Victor.  Frédéric is a super talented and established wine maker, but makes this wine under his son's name because he makes it in conjunction with Victor; basically it's like Victor is apprenticed in making this Beaujolais.  the grapes come from vines that are 50-60 years old in the vicinity of Morgon.  The vines are farmed naturally, they graze sheep in the vineyards, the grapes are hand harvested and wild fermented, and only a tiny bit of sulfur is added at bottling.   The soil is a lot of sand and granite. 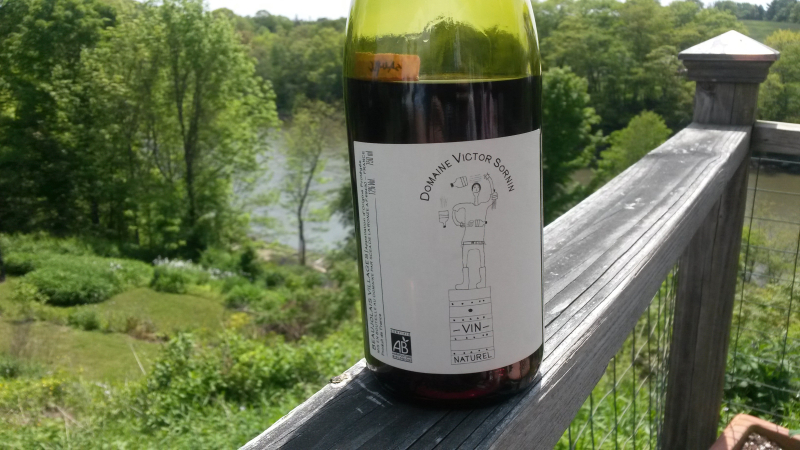 Aroma: Sornin's Beaujolais smells like red fruits-wild cherries and some black raspberries.  There's a little bit of cranberry, currant, and a tiny bit of a beeswaxy aroma.  There's some black pepper and woodsey walking in a wood kind of aroma too.

Taste: The primary taste is rich bright berry fruit and almost no tannin.  It's a neat balance between having vivid red fruit but not a heavy body.  The Sornin Beaujolais has a slightly angular kind of body and a crispy kind of texture from all the granite soil the Gamay grows in.  The wine starts with lots of dark wild fruit, then there's some woodsey black pepper on the mid palate, and the finish is very clean and just kind of washes away.  This is an absolutely excellent example of what Gamay can do when it's really treated well in the vineyard and a talented wine maker shepherds it through fermentation.

The Victor Sornin Beaujolais retails for about $18 and really, I think it's an awesome deal for that kind of price.  Most Beaujolais is either really cheap and crappy or priced up in the $20s.  The Victor Sornin Beaujolais is a great expression of Gamay that I'd confidently recommend to someone that wanted to get to know the grape better for less than what top tier Beaujolais normally goes for.  Drink this with a chill over the summer and you'll have the perfect refreshing summer red.