Late last night I got back from a ridiculous trip through Umbria.  A primry reason for the visit was to hang out with this guy pictured above: Danilo Marcucci.  Here's how it went. 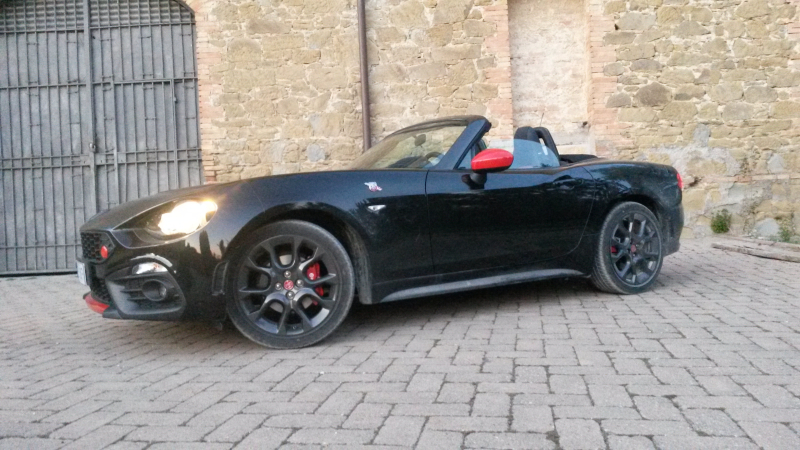 I wanted to do Italy right so I rented a Fiat Abarth 124 Spider: a loud, rear wheel drive, turbo charged convertible with lots of flat black on it.  I pulled up to Danilo's winery (a 400 year old stone warehouse) at about Noon and he couldn't get enough of the car!  That was the plan, that aside from being super fun to drive, the Abarth 124 would certainly help make me memorable to all the wineries I was visiting.

Danilo grew up in the hills outside Spoleto where he started making wine with his Grandfather at 6.  He didn't stick with it and became a wine salesperson instead.  He sold a lot of super expensive Burgundy and Bordeaux until after a multiple Bordeaux tasting left him really sick.  He had a physical and blood work found traces of pesticides in his blood.  Knowing haw industrial grapes are grown and how many chemicals get into mass produced wine Danilo swore wine off and became an architect.  But a chance tasting of a no sulfur wine from a nearby legendary farm winery (Collecapretta) changed his life.  He dropped architecture and started learning how to make wine, reviving the early lessons his grandfather had tried to impart.

Danilo started out working with Collecapretta and soon at an old vineyard way up in the Appeninnes called Campanino.  Danilo sought out other older traditional farmer wine makers to discover more old traditional ways of making wine and solving different problems that may arise as wine ferments and ages.  He's a very passionate, driven, and charismatic guy.

It wasn't long until Danilo had learned a lot from a lot of people and was starting to make waves in Umbria.  Making wine without sulfur, pesticides, additives like tartaric acid or coloring, avoiding even temprature control in the winery is pretty revolutionary and challenges the very large industry of modern conventional wine.  A generation of wine makers across the world had been taught that they couldn't make wine without expensive equipment and chemicals.  Generations had learned in Oenology school that the old ways of farm wine making were dangerous and would only result in wines with flaws.  The idea that you could make great wines with out all that expensive equipment and education makes wine making accessible to smaller lower capital family farms who always thought exporting wine was out of reach, but it also challenges a huge industry.

Danilo makes wine himself at Della Staffa using only ancient technology that wine makers from a hundred years ago would recognize.  Those wines are great and shock people when they learn they're made with no modern technology.  But that's not what makes Danilo so noteworthy. Danilo is a noteworthy figure in the wine world because he actively wants to pass on and share all this knowledge!  At this point he's working with about 10 wineries including Collecapretta, Tiberi, Campanino, Rabasco, Ceppaiolo, Ribela, Furlani, etc.  That's a lot of other people who are now making wine in a very natural no chemicals way and it exponentially increases the spread of these ideas.  It's a kind of a revolution and it's amazing for me to be able to see it in real time.

Back to actually working with Danilo

Danilo pretty much immediately put me to work: 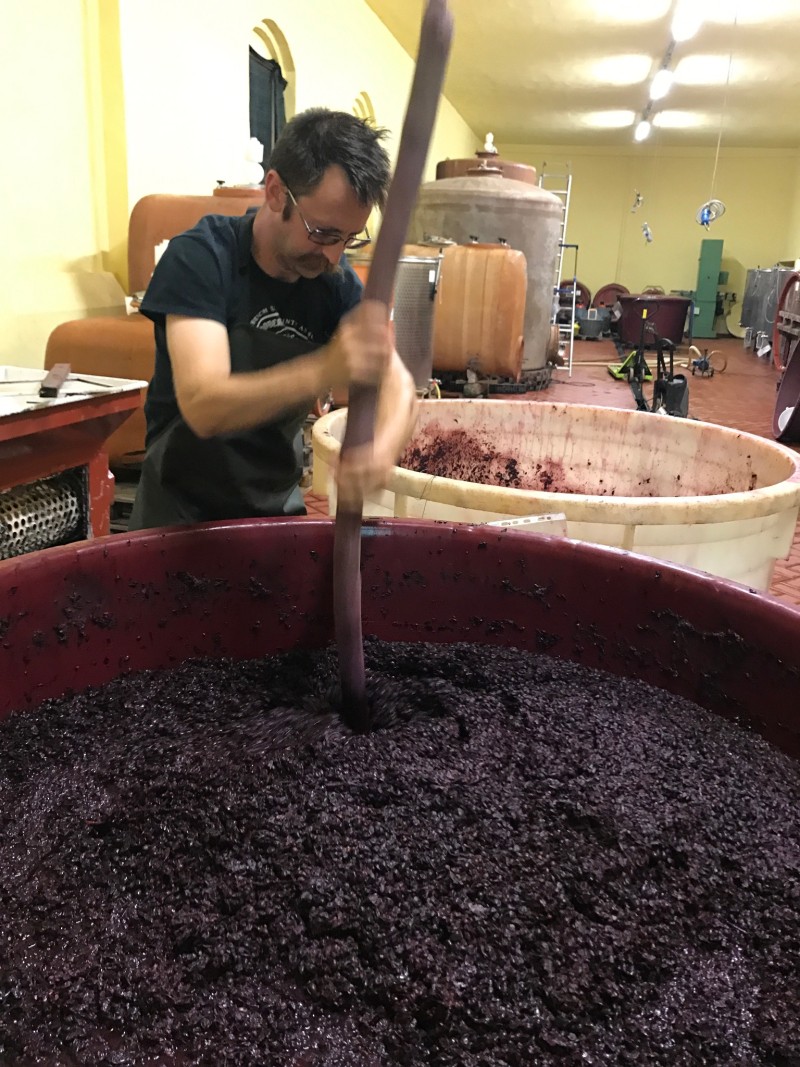 That's me stirring a vat of fermenting Colorino grapes with a 100 year old tree branch that his grandfather had used and passed on to Danilo.

Tangentially, here's a video of Danilo and I driving around in an Abarth 124 Spider.  It's not too relevant but it shows more of what Danilo is like out of the cellar.  In the cellar he's all business.

Making wine with out using any chemical additives, sulfur, or temperature control, takes a lot of manual labor on the part of the wine maker and constant attention to detail.  In this kind of wine making there's no safety net.  In addition to fermenting with wild yeast and using no additives Danilo defines true natural wine making as wine making in which the wine maker invests a piece of themself and their soul in each wine.

Here's a video of Danilo opening up a 150 year old cask to clean it from the last vintage that aged in it and prepare it for the new vintage.

The analogy we both kept coming back to is that having a small natural winery like this is very similar to having a whole lot of kids.  Danilo was very focused and quiet all the times we spent in the winery.  There were always 5 or 6 things happening at once.  We would be cleaning and preparing a barrel while at the same time aerating some fermenting wine and at the same time transferring wine from one tank to another.  If you put all your attention on one of your children you run the risk of another one making some kind of trouble while you're distracted!  They all need to be watched all the time so that you can do each wine making step at exactly the right time. 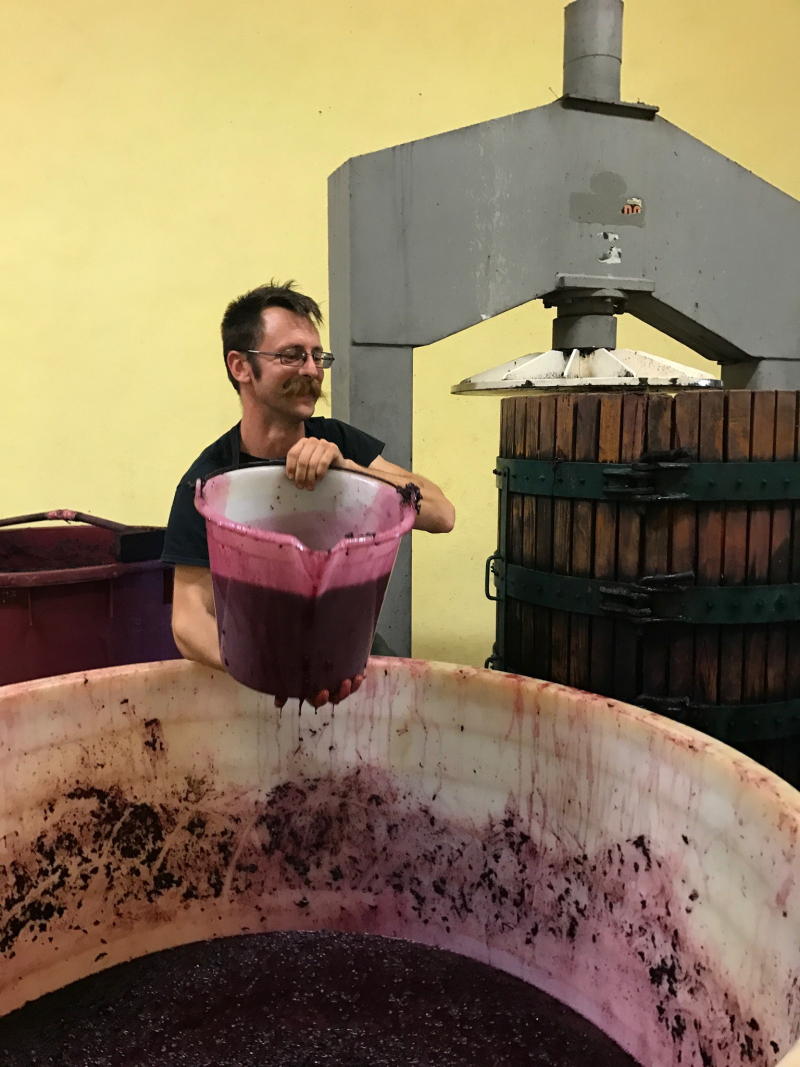 We pressed all the colorino grapes that were in the primary fermentation and it was a whole afternoon of slowly scooping them into that ancient wooden basket press until it was full, pressing them down enough to make more room, scooping more in, then pressing, and repeat over and over until all the grapes were pressed and we had the wine in two open vats. 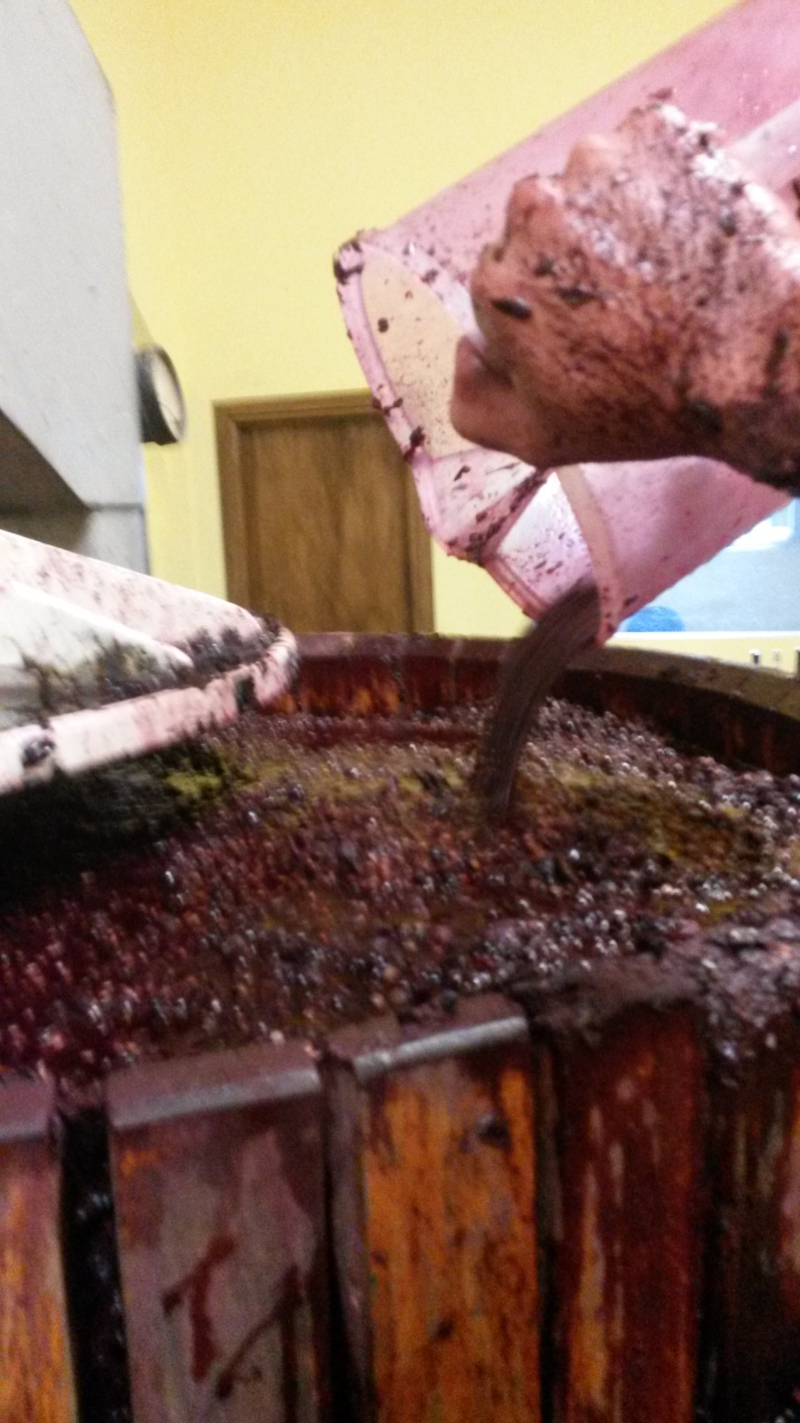 Here's a super attractive pic of what fermenting grapes in an old wood press looks like.  It's not too pretty but let me assure you, at least it smells great! 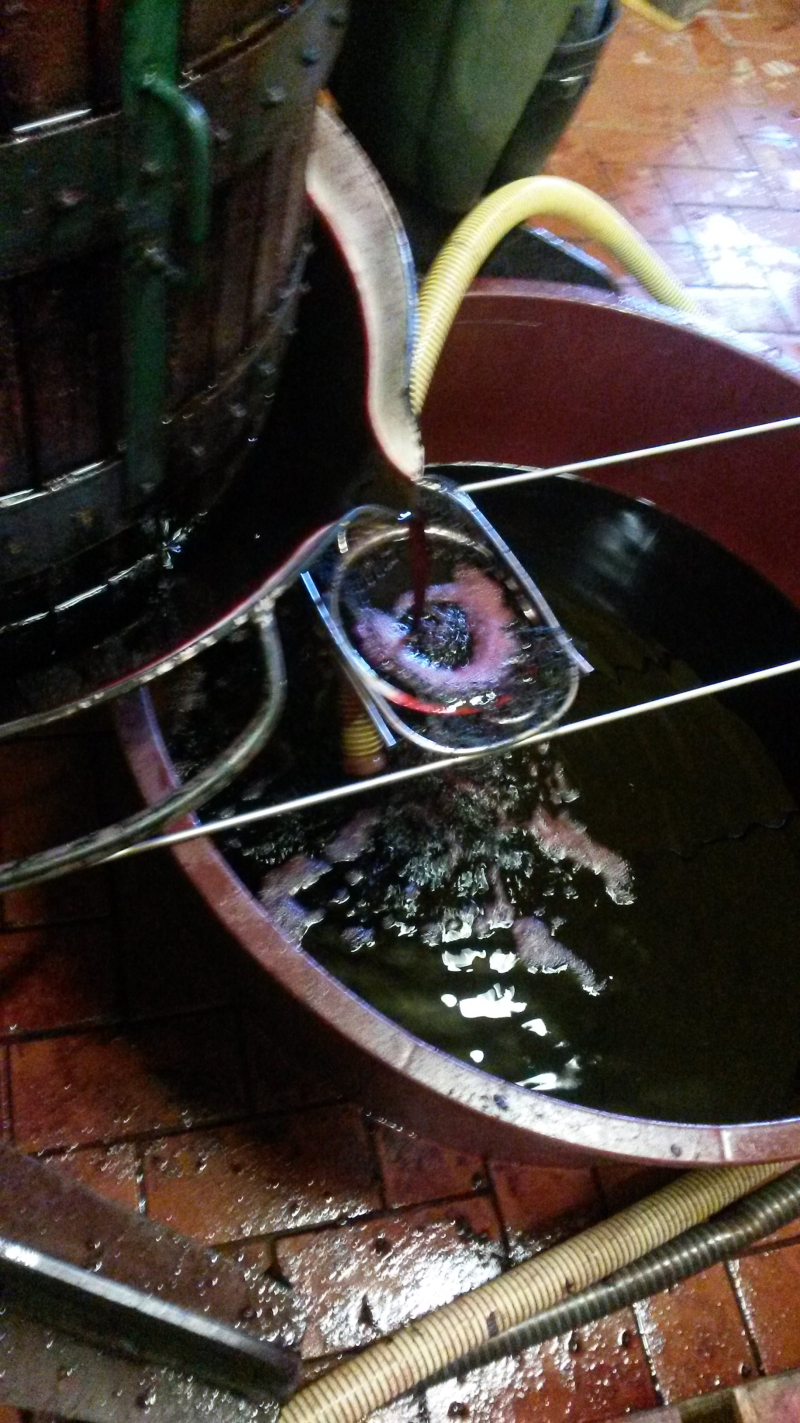 As we pressed the grapes the fermenting juice drained out of the press and through a metal colander to catch any large solids and we then pumped it off into the open vats to keep fermenting for a couple days.

After the wine had had a couple days to continue fermenting we put it into a pair of old wood casks to finish fermenting and to evolve.  Wooden wine casks have to be kept and treated in very particular ways to make sure the bacteria you want stay active in them and keep any other bacteria from colonizing them.  A trick he told me about was to leave behind a few litres of the wine you had most recently aged in the cask so that the yeast stays and has that wine to live off of until the next vintage when you put more wine in.  Generally you don't want to leave a cask empty for too long anyway. 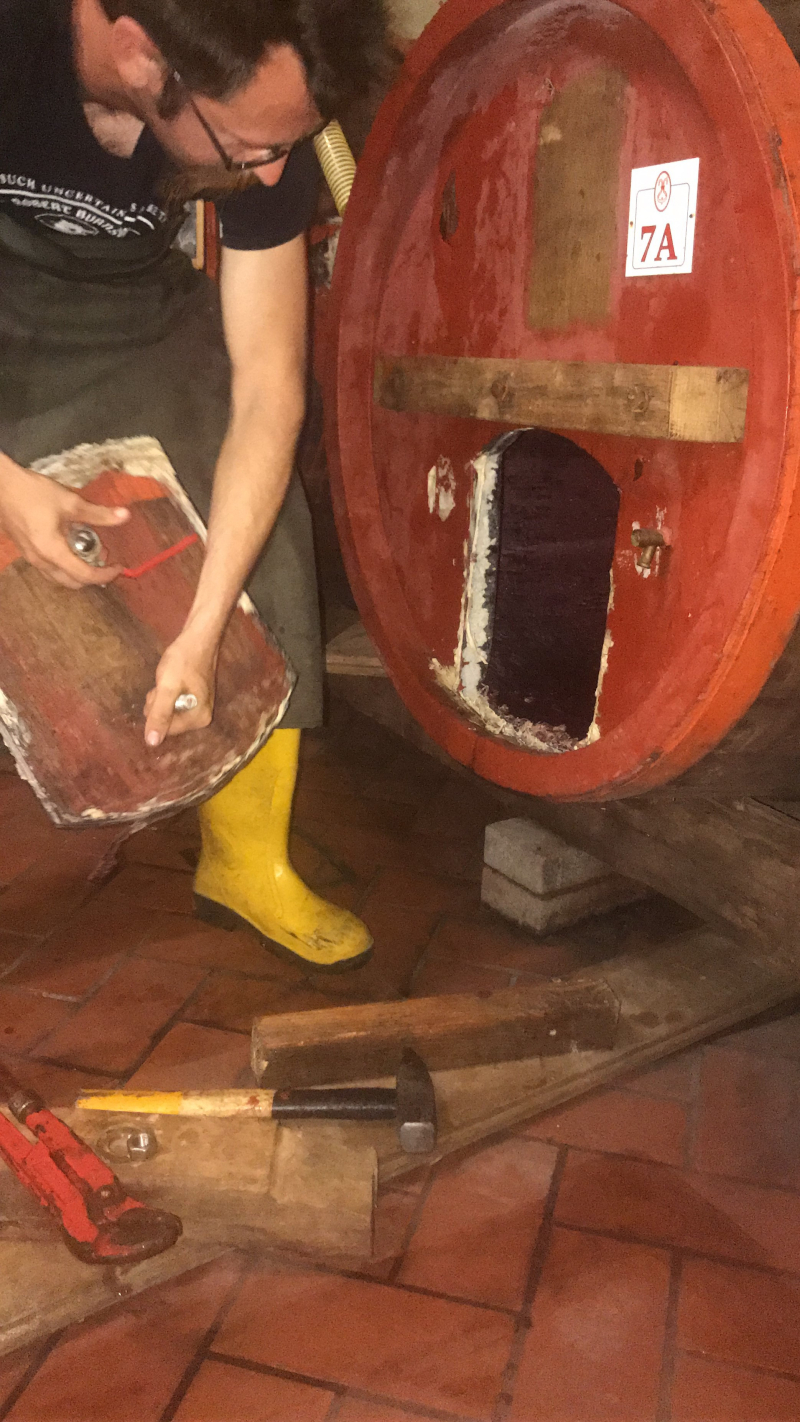 After you take the door out of the front of the cask you have to clean it thoroughly with water, scrub it, and then remove all the water.  Once it's all cleaned out you need to re-install the door. 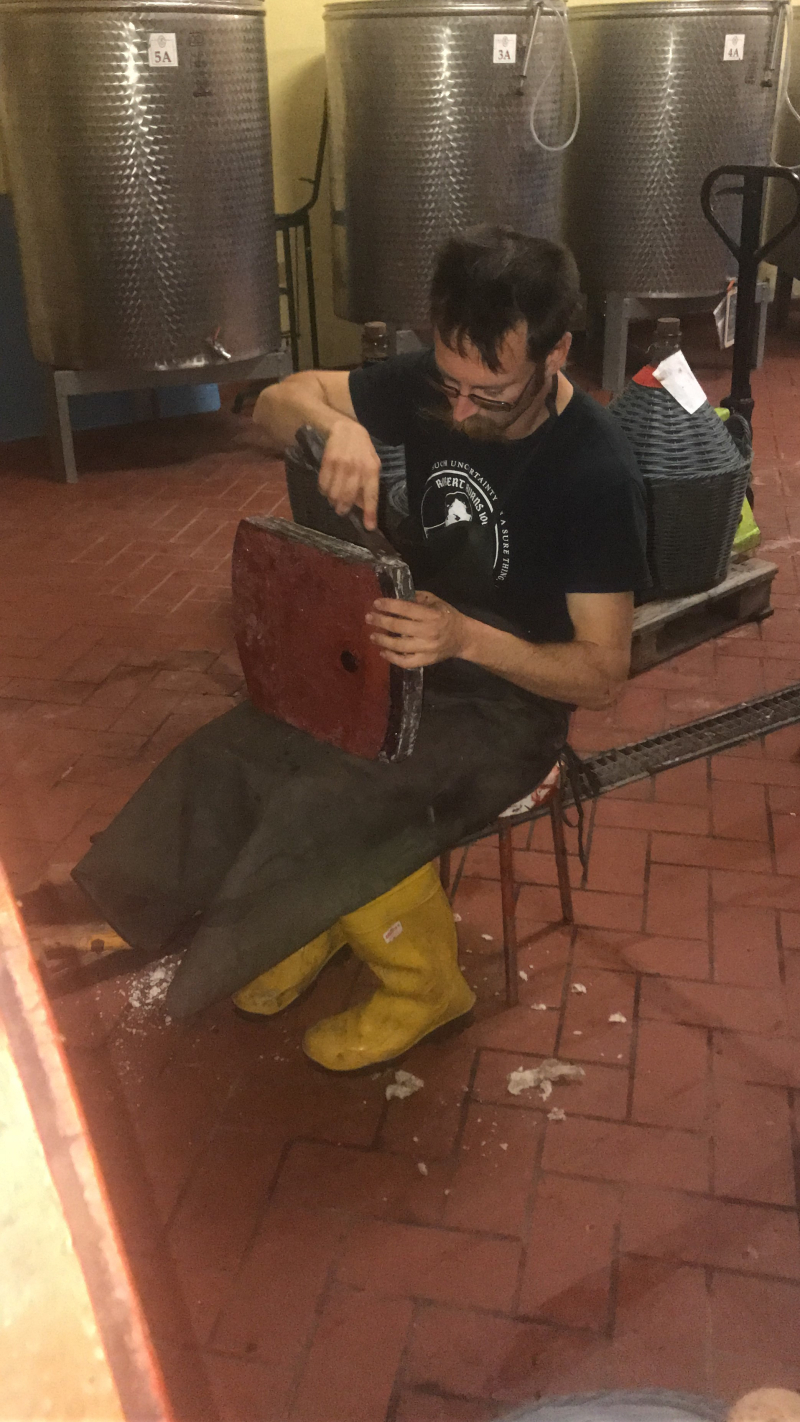 First you clean all the putty from around the door. Then you clean all the putty from around the inside of where the door will seat. 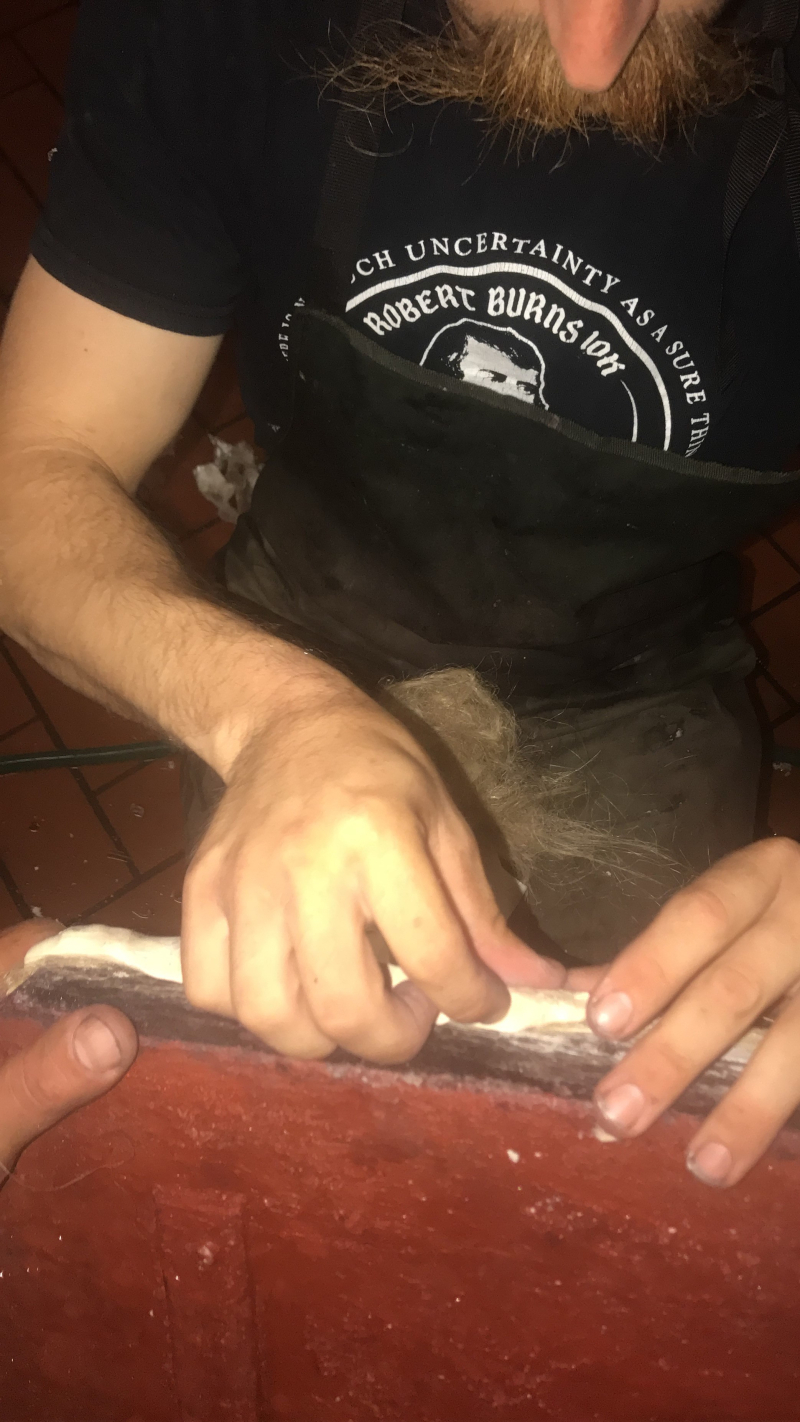 Then you prepare the door by putting fresh putty holding in some kind of long vegetable fiber (I don't know my Italian isn't that good), and some waxy lubricating substance around the edges of the door.  Also, check out that shot of my mustache! 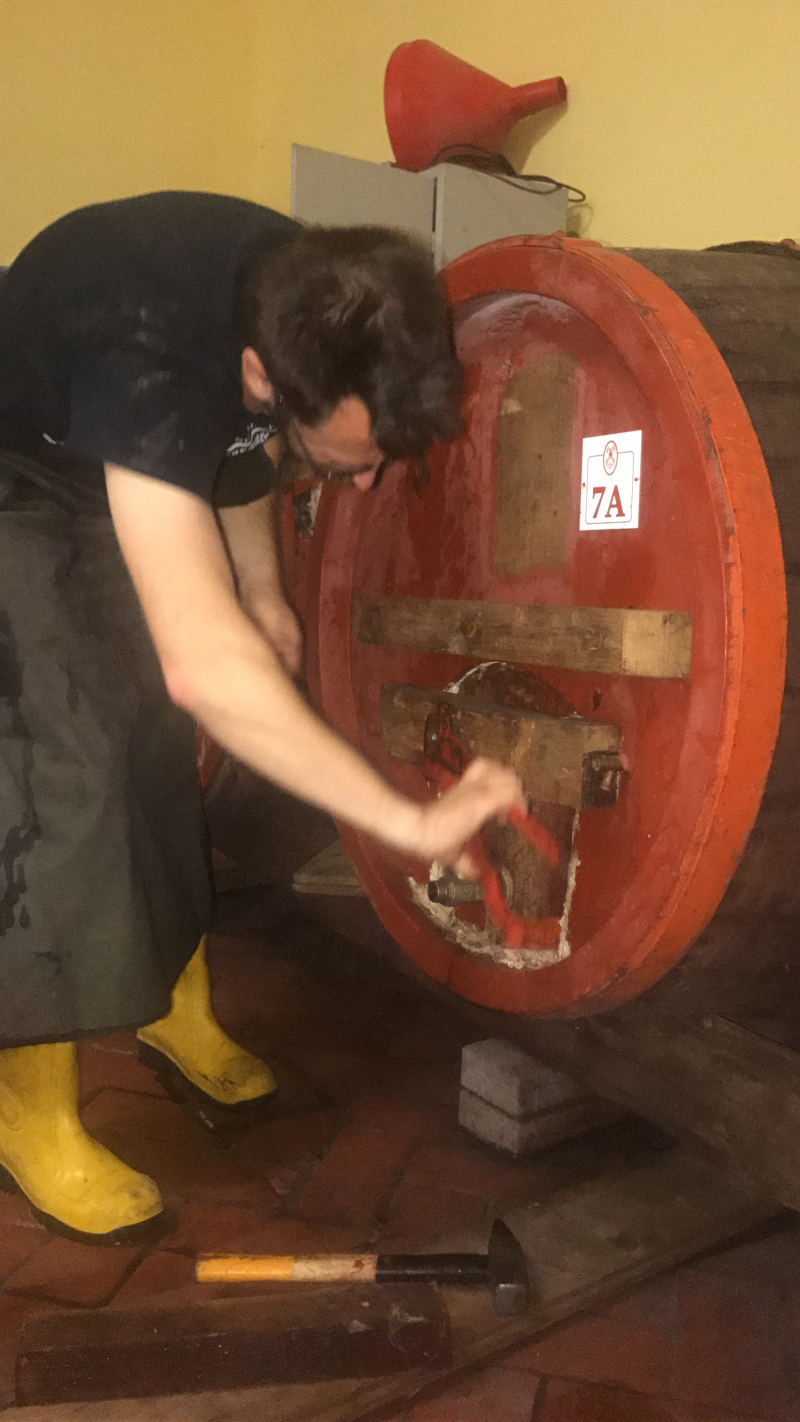 Once you fit the door back in as much as you can, you re-install the yoke that sits over a bolt protruding from the front of the door.  With the mechanical force of the nut on the bolt you can draw the door back up into place.  The door gets larger on the back side so that it wedges tighter and tighter as it is drawn forward. 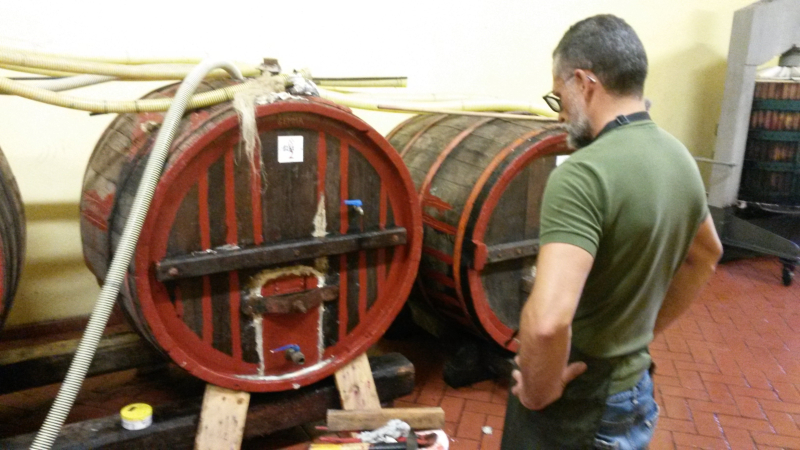 Once you get the door seated you start putting wine into the cask.  Then it's a process of waiting and watching to see what leaks develop. Like an old wooden boat taken out of the ocean casks dry out when there isn't wine in them and then they take some time to re-expand and seal once you put wine in.  But you don't want to let them leak too much, so Danilo and I spent a good hour watching, and then sealing small leaks with bits of more fibre and putty until he was satisfied.

I have pretty good video footage of all this and will eventually get it all edited and up on Youtube.

Danilo has had a huge impact on natural wine making in central Italy and I'm super lucky to have been able to go spend that time with him and see some of how he works.  Look out for more info and videos as I get organized now that I'm back!