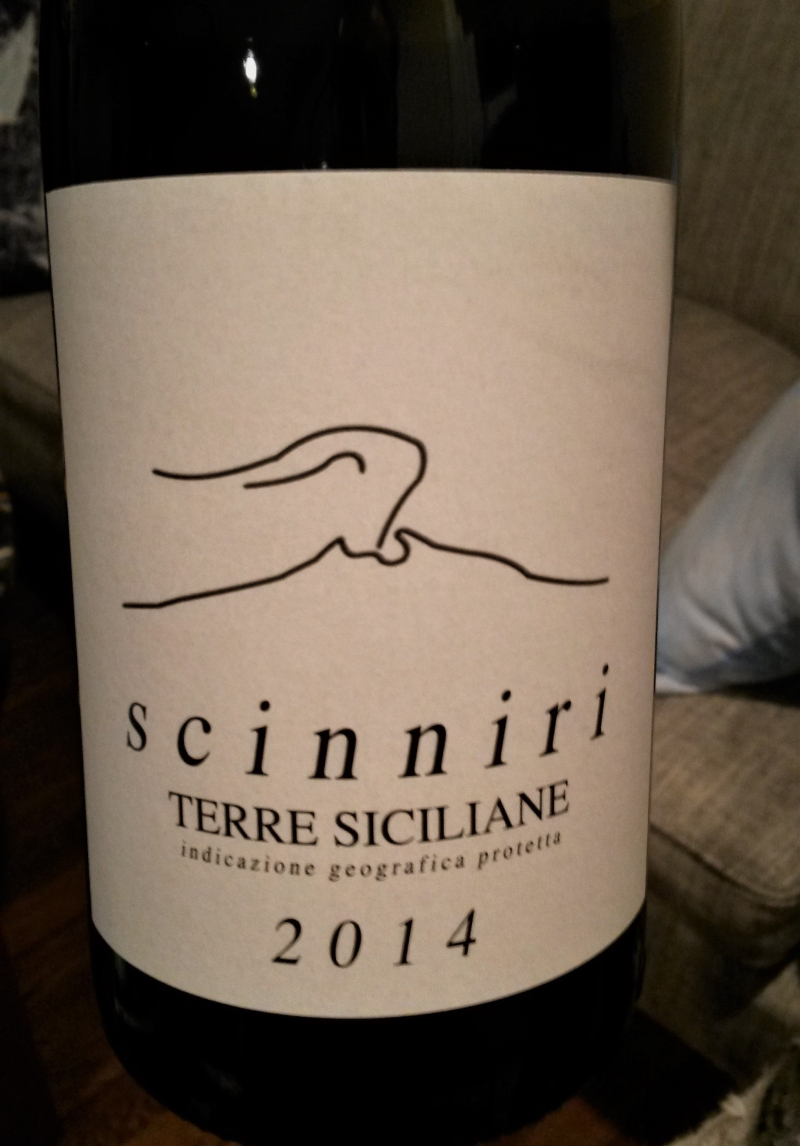 Scinniri is made by Passopisciaro up on Etna's north slope.  It's an amazing place: the side of an active volcano, nearly 3000' above sea level, the lava looks like a moonscape, and not too far from the African coast.  It's practically like the garden of Eden here.  Andrea Franchetti the long term project of restoring an old farm house and vineyards in Solicchiata back in 2000.  I have a hard time believing it would turn into what Passopisciaro is today.  I've never met him, but I've drunk a lot of his wines, talked to a lot of people that know him, and I've hung out around this winery.  I get the sense that he's a thorough precise kind of guy: that's the common theme I've found in his wines and physically how the winery is set up and renovated.  but he's not afraid to experiment and innovate.  Along with Frank Cornelissen, Franchetti is a driving force in recognizing the different vineyards around Etna's north slope that have special characters to them.  He and Cornelissen are moving towards something like a 1er cru system but using the Sicilian word "contrada". 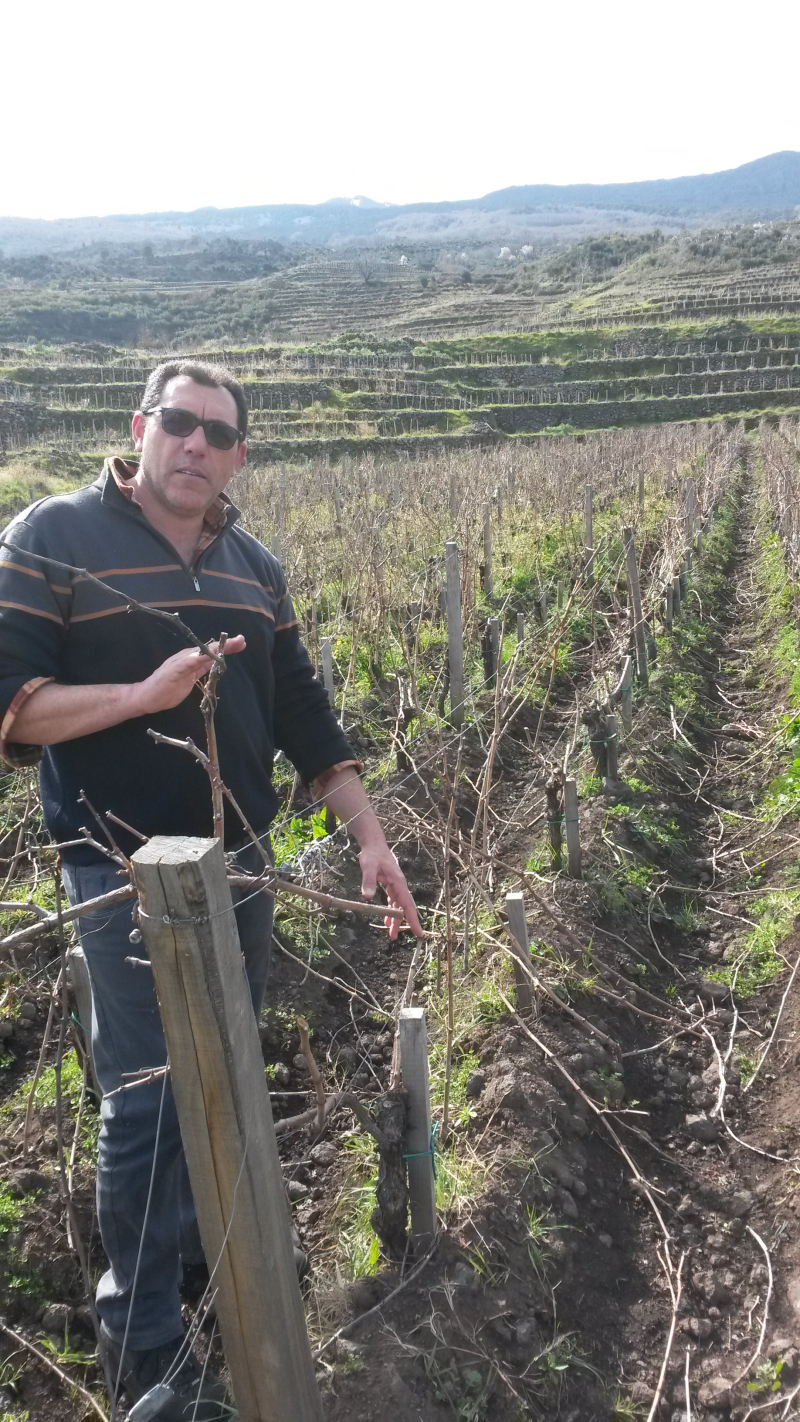 This is Vincenzo the vineyard manager.

The Scinniri is a sort of rare open secret of a wine that he makes as an entry level intro to Etna.  Also FYI, 2014 was an amazing vintage on Etna.

Aroma: the 2014 Scinniri has smells of smoke, cherries, also some dried cherry, and an aroma of charcoal.  The more the Scinniri opens up the prettier it gets!  Aroma's of roses start to become more noticeable.   But still there's something a bit charred lurking in there.  It's both a really inviting lovely aroma and also somehow very volcanic! 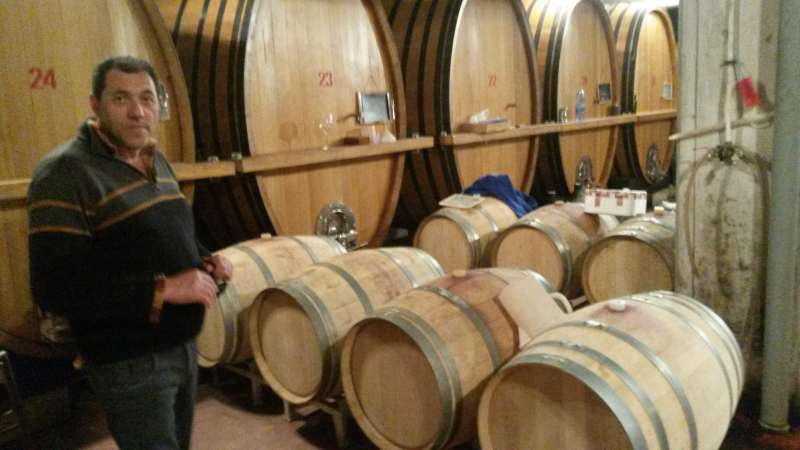 Taste: In the mouth the Scinniri has more of that lovely relaxed supple cherry flavor.  The wine really has power to it; it's dark and focused and muscular, but the texture is really smooth.  Nerello (the grape) has many faces, but this is a great example of some of the commonalities a lot of them have: dark, dry, with noticeable but really enjoyable alcohol. The texture is so smooth and the aromatics are really unusually pretty.  the juxtaposition of deep dark volcanic power and lovely pretty aromatics with a smooth texture is irresistible.  This is a great warming winter wine that tastes like a tropical volcanic island.  And this vintage in particular is a great deal.

Pentimento is made by Michele d'Aprix, an American woman who after studying organic chemistry in college took a circuitous path to end up in Bordeaux.  In 2004 Michele met Stephane Derenoncourt, a successful Bordeaux consultant wine maker who became her mentor.  Michele has fallen in love with Bordeuax, but believes that what makes Bordeaux great, all the fun accessible juicy reds, are over looked in America because of the super expensive trophy wines and cultural baggage around the name "Bordeaux".  Michele describes the Pentimento as a representation and tribute to all the people that have helped her along the way and the lessons she's learned. 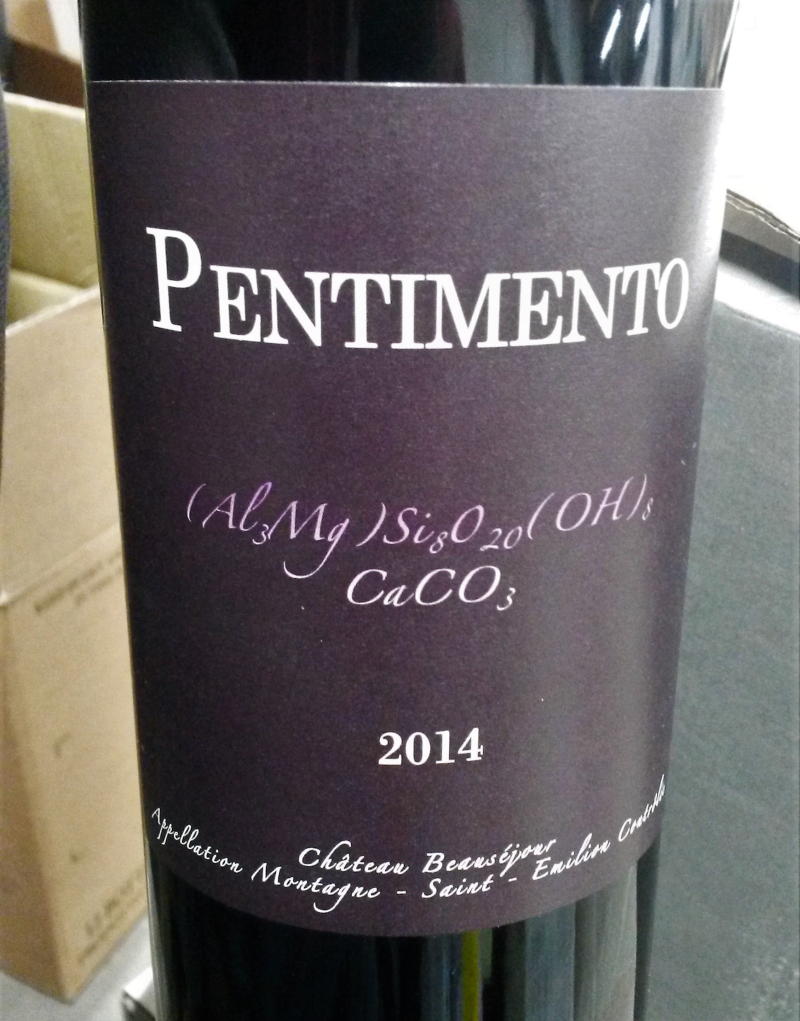 The chemical equation on the Pentimento label is the equation for calcareous clay soil; the soil that gives the right bank of Bordeaux it's unique character.

Aroma:  The Pentimento's aroma is dark and kind of gravely.  There's blackberry and blackcherry fruit to the Pentimento but also cigar b (cedar, and old dry tobacco) and a hint of wild black peppery spice.

Taste: big and juicy but with good acidity that makes the wine taste more alive.  The Pentimento is well balanced.  It's got nice dry tannin that reinforces the wine but isn't too heavy.  The wine is substantial, out going, knows what it's doing and has a plan; this is a real go getter of a wine!  I love the balance: not too heavy but with enough oomph to work with a roast beef!

The Pentimento is a great winter red!  It's lovely to drink and not too challenging.  This is impressive, good with a range of foods, and very integrated and balanced.  This is a great Bordeaux that is fruity enough to please non wine drinkers while also being a great layered complex Bordeaux that you can enjoy.  this is available at the Rosemont Markets and the Lincolnville General Store 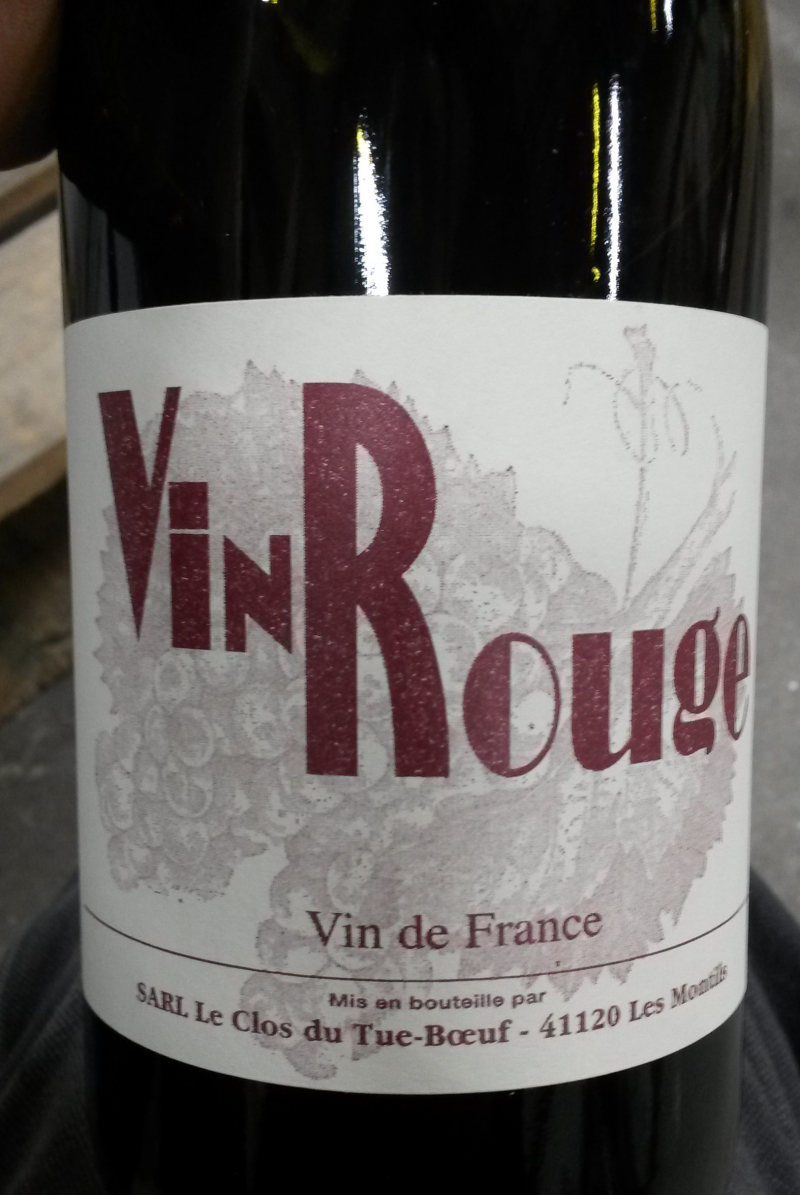 Thierry Puzelat is the wine maker at Clos du tue Boeuf.  His family has been here in the central Loire for a long time.  The name Clos du Tue Boeuf goes back to the middle ages.  Thierry and his brother Jean Marie converted to organic viticulture in the early 90's and the family has a history of going their own way, planting traditional grape varieties that have been disallowed from the Cheverny AOC.  When a wine get's vetoed from one of the AOCs they're in for not being mainstream enough the Puzelats sell it as VDF.  For more back story check out Dressner's excellent page here: Clos du Tue Boeuf

So this may be one of those wines that Thierry labored over but the board of the appellation tasted it and decided it was too alive and fun for their tastes.  So here it is.  Insanely good ripe wild fermented Gamay. 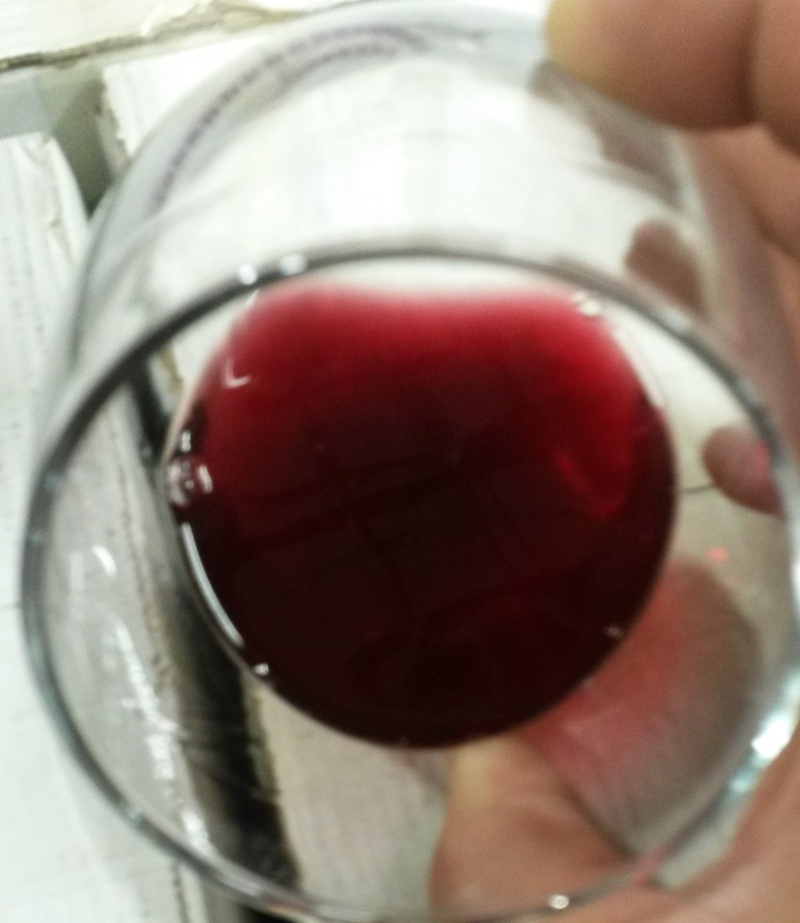 Aroma: Puzelat's Gamay smells of juicy fun lively vivid raspberry and cherry fruit.  It's a lovely jammy kind of aroma that has some underlying wild woodsey furry smells that are just text book wild Loire Gamay to me.  This VDF almost smells like a lambic; a really good lambic.  This Gamay perfectly walks the line of juicy and funky, just on the juicy side.

Taste: this Gamay has lovely vivid fruit.  pop in your mouth ripe raspberry and cherry with more of the wild tension and pepper.  The flavors linger, but it's very smooth and integrated.  It's a delicious thirst quenching red.  maybe the best most satisfying Loire Gamay I've had.  I guess I should try that Noella Morantin....  the Clos du Tue Boeuf Gamay isn't a demanding challenging red, but it's lovely and full of life.

This is under $20 retail and Blue Hill Wine Shop and Maine and Loire have it.

Campanino is an old (and I mean hundreds of years) vineyard up in the Apennine mountains of eastern Umbria.  It used to be a hunting retreat of a local noble family and now is run as still a retreat, but open to the public; or at least anyone who knows it exists, can find it, and book a room. 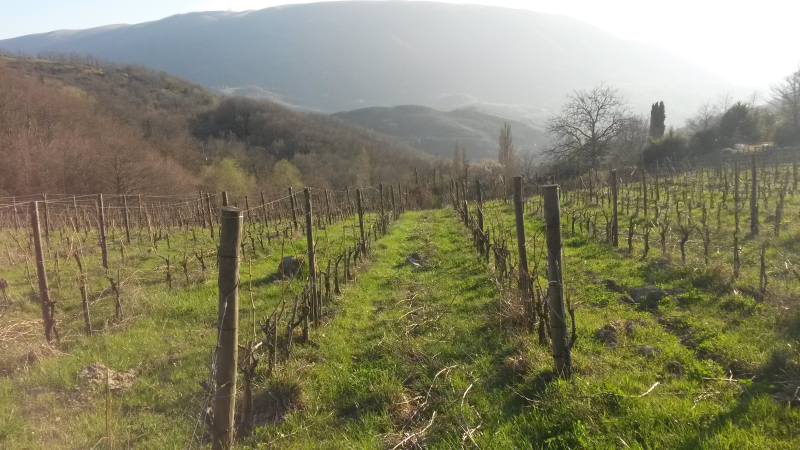 Above is a picture of the vineyards looking up at Mount Subasio.  It's even steeper than it looks.  The vineyards are organically farmed and many of the vines are actually planted on their own roots: ungrafted.  As far as I know, at 3000' above sea level, this is the highest elevation Sangiovese vineyard in the world.  Harvest here can happen 2 months later than vineyards just 15 miles away down on the plain. 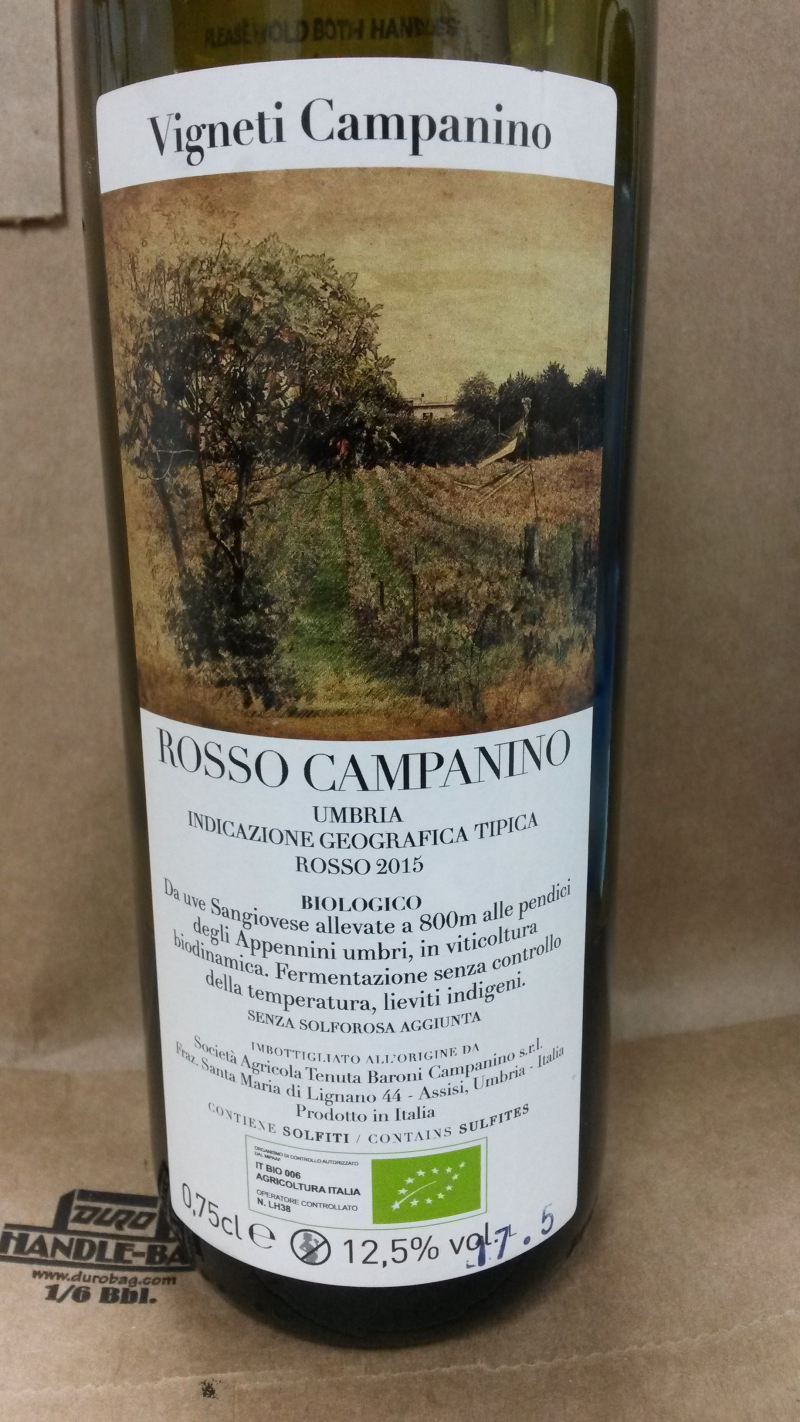 Campanino is the vineyard and winery that Danilo Marcucci kind of cut his teeth on and started making wine at earlier in his career.  Danilo is still the supervising/winemaking advisor.

Aroma: the Campanino Rosso smells like dark fruit, but it's fresh and vivid: fresh vivid black cherries, cranberries, currants, and also roses.  It's a very pretty aroma and also a classic Sangiovese aroma, but not a Tuscan Sangiovese aroma.  What I can't smell is just as interesting to me as what I can.  I can't smell any dry dusty earth which to me is a hall mark of Tuscan Sangiovese.

Palate: Juicy, but in a fresh thirst quenching, gulpable kid of way.  The Campanino Rosso has the acidity I associate with Sangiovese but it's a richer more substantial bodie than most are.  The smoothness and integration of the wine is really impressive.  The finish is very very smooth, but then there's a dry very soft tannic sensation that lingers after you've swallowed.

Here's a video of the vineyards ↑

The 2015 Campanino Rosso is more substantial, riper, and broader on the palate than Campanino's wines usually are due to the hotter vintage.  That's no bad thing though.  This is a fantastic wine.  It's not a big extroverted slap you in the face kind of wine but it is so, so well made and delicious.  It's pretty ridiculous it's about $20 per bottle.  I don't know how Danilo Marcucci pulls this off.  He told me in all seriousness as we were running that he puts his soul into every wine he makes.  Watching him in the winery I believe it.  All I can say is the guy must have a lot of soul!