Paterna is a tiny little farm in the hills outside Arezzo.  The area is known as the Colli Aretini and is one of the more prestigious sub zones of Chianti; it's also one of the colder and higher elevation parts of the Chianti zone.  That is important in a hot year like 2015.  Other places in warmer southern and central Tuscany made wines that had rather high alcohol, but Paterna's wine is beautifully classic and balanced. 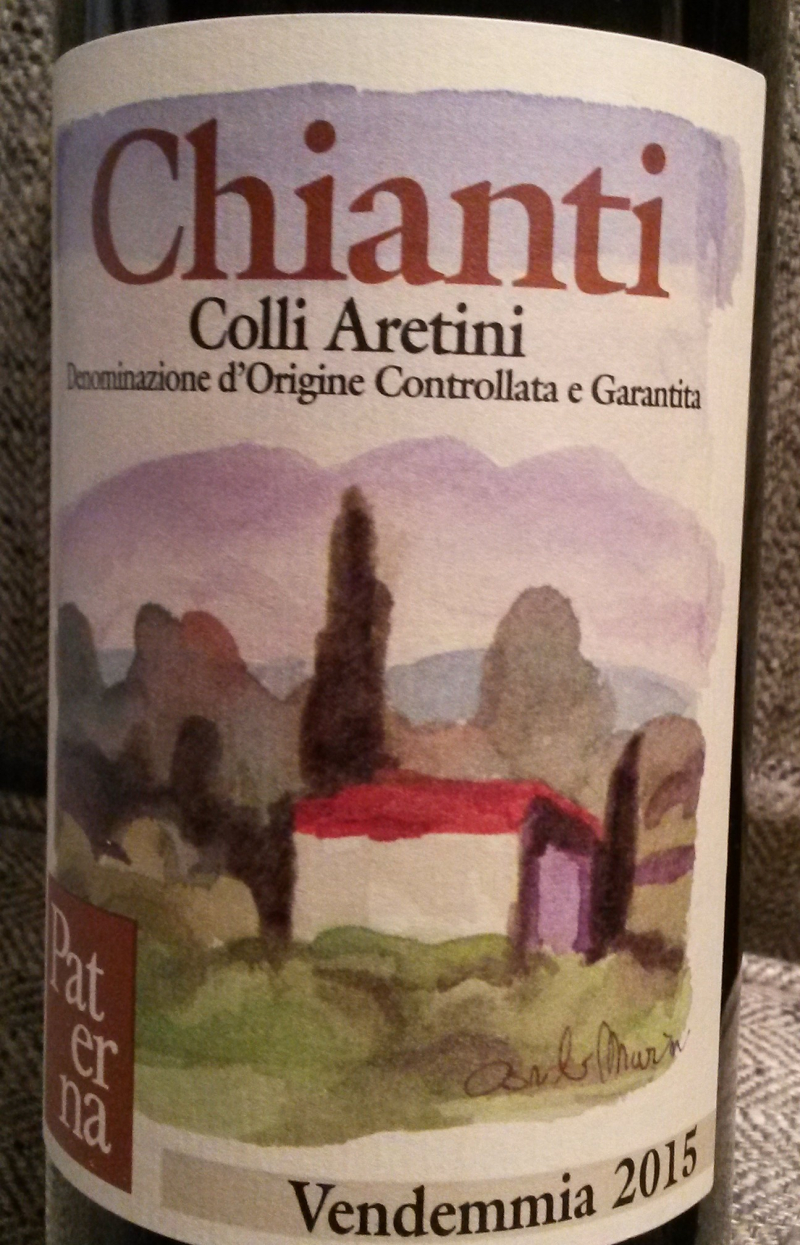 I visited Paterna in the spring of 2017 and the farm made a big impression on me.  Paterna was started in 1978 by a group of friends that wanted to leave the hubbub of Florence behind.  They bought this old family farm isolated in the hills and basically went back to the land.  One of the primary people who's still there, Marco, is actually a professor of traditional Tuscan Agricultural crafts at a local school: Scuola di Lorenzo di Medici.  The land on the farm has never seen pesticides or fertilizers.   The family that originally was here didn't and Marco and crew have farmed it organically since they bought it.

Here's a whole blog post I wrote during my visit to the winery:

The Chianti Colli Aretini is about 90% Sangiovese and 10% Caniolo and Colorino.  It's fermented in tank and then aged in used oak barrels for, I think, about a year.  The aging varies vintage to vintage though.

Aroma:  Fresh juicy vivid cherries, some raspberry, and also a floral kind of smell.  It's a lovely aroma of ripe fresh fruit that's pretty strong and jumps out of the glass.

Taste:  The Paterna has more juicy fresh fruit on the palate.  It's medium bodied and has dark spicy tannic structure that comes in on the midpalate and balances that fresh lively cherry fruit that drives the front of the wine.  There's also a black pepper spice that comes in on the mid palate and some dry dusty Tuscan earth.  The wine is pretty smooth and balanced overall.  It's a very classic Sangiovese that has all the right components in balance and has had enough time in bottle to start to integrate.  The flavor profile of the wine is pretty ripe and dark, but it has crunchy stiff tannic and acidic structure that holds the fruit in place.

Good now but it will definitely improve in the coming years.  This Chianti is available for about $20 at Meridian's, Omi's in South Portland, Whole Foods, Sawyers Specialties, and the Brooklyn General Store.