Hanging out with Danilo Marcucci

Tasting day I got in an early morning run up to the Castello and to the piccolo town of Monte Melino.  This is the Sanctuario Madonna de Lourdes 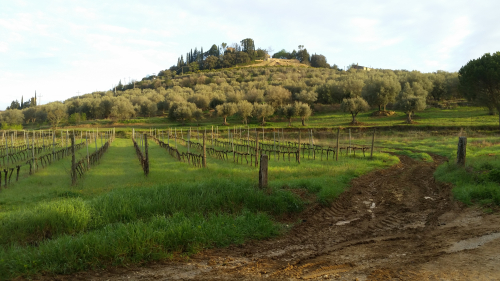 Looking up at the Castello
I ran up a hill past an old cemetery and got a great shot of the broken up sedimentary rock that is common here.  It's decaying and you can see it would be easy for a vine to get its roots down into it. 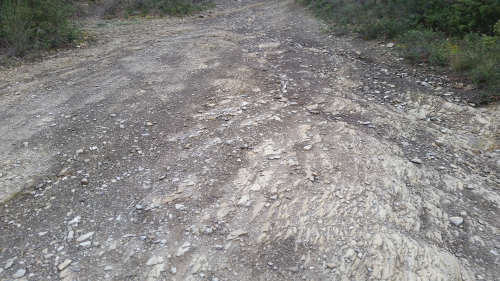 I grabbed an espresso and then Danilo and I blasted over to his tiny little experimental vineyard: Ceppaiolo.  We labeled a bunch of bottles so that they'd be ready for dinner the next day and talked about stuff. 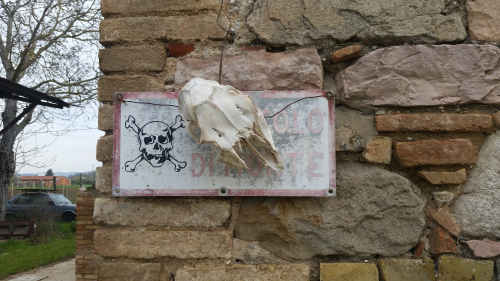 Ceppaiolo is tiny and Danilo does everything on his own. There are two small tanks and maybe about 300 Sq ft of room inside. He had just planted 1 hectare of new vines: unusual clones of Sangiovese from up in the hills.  He said he'd been working 12 hour days in the vineyards to get the planting done.

We talked about how he is trying to find ways to translate more mineral into the wines in order to make them more stable without having to add anything.  He gave the example of comparing an inorganic non decomposable stable form (a rock) to organic unstable forms (grapes).   He sees wine as being something that marries the two.  If you try to lick a rock it won't taste like too much.  Believe me, I know.  But grapes pick up tiny amounts of minerals and then through yeast eating them and changing the chemical structure you can actually taste those minerals and the very short shelf life grapes gets turned into something that's still organic but much more stable.  And Danilo's theory is that if he can do everything right in the vineyard, and then encourage the wine to ferment in the ways he wants that are friendly for the different yeast families, the yeasts will preserve more of the minerals in the wine and the wine will be more stable, but still with no added sulfur.  We talked about the four most common yeast families that each prefers slightly different conditions but then I forgot the names.  I'll add them in once he reminds me.
Then we headed back to La Staffa to do a vineyard walk.
We started with this vineyard that he had grafted Sangiovese onto old root stock.  Danilo told us that even after he and Alessandra got married he didn't want to take in making wine from the la Staffa vineyards.  They're relatively big (at about 13 hectares) and he was so busy with other projects that he was worried he wouldn't be able to devote enough time to do it right.  Then, one morning in...I think it was 2013, he just woke up and said "ok.  I'm ready to make wine here now" 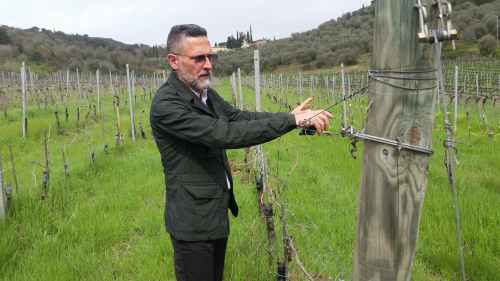 This vineyard is the Sangiovese that Brioso rose per nat comes from because one morning a few years back he noticed that wild boars had been eating the grapes in just one particular vineyard spot.  So he decided to harvest those grapes all that day to save them from the boars coming back the next night.  The grapes weren't super ripe yet and so he made pet nat rose. 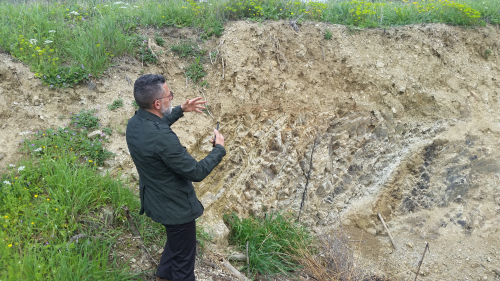 This is a piece of the bank that he cut away so that he could see the underlying stone and also to show people what the soil and rock that is the real base of the wines look like. 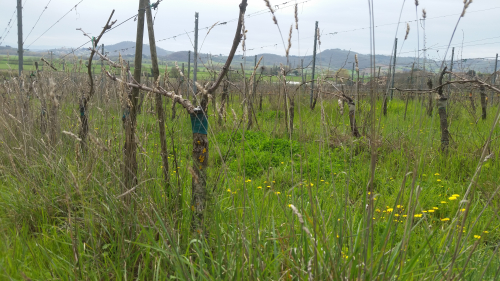 This is the Bianco degli Innesti vineyard. It's a grape that Danilo created.    He found and old semi wild vine that never needed any copper or anything in the vineyard to prevent mildew.  He sent cuttings to be analyzed and it turned out to be a very old cross with a wild grape that was created back in the late 1800s to see if it would be resistant to phyloxera.  Danilo then crossed it with Trebbiano to try to improve the quality of the grapes but still preserve it's natural resistance to vine diseases.  It worked!  So he planted some rows and now, each spring he prunes the vines, but then just leaves and comes back to pick up the grapes!  Danilo only makes about 6oo bottles of it.
Speaking of pruning: pruning helps wake the vines up so most people prune in January because that sets the vines up to flower and get going as soon as there's warm weather.  However, there have been a lot of problems with frost in recent springs.  If the vines have already started to bub break when there's a frost those little buds what will eventually flower and become grapes can get killed and the vine may not be able to produce any fruit in that year.  Because of all that Danilo explained that he's started pruning later and later.  Pruning late keeps the vine asleep longer so that if frost does happen, there won't be any buds out to be damaged.  Pruning late does mean that the vine won't produce as much fruit, but that's not necessarily a bad thing if you're trying to limit yields a bit so that the grapes will be more concentrated.   Danilo was still actually in the process of pruning and we could see workers out in the vineyards finishing up. 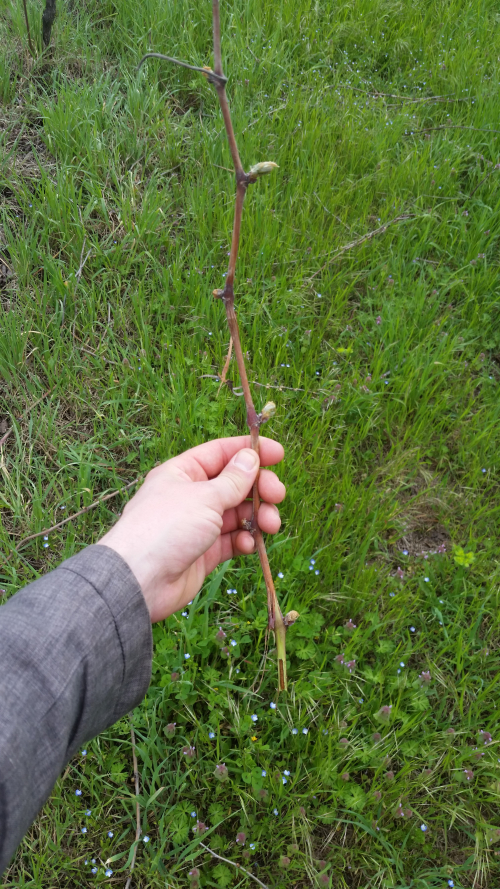 Here's a picture of a branch that was cut off and has blossoms on it already.  But it's better than losing a whole harvest to frost. 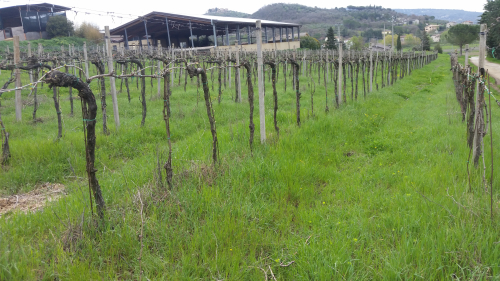 This is the entire Scuderia vineyard!  Not too big.
Here's an short 6 minute video of Danilo explaining some of this stuff as we walked around:
Then, it was time for the SelectioNaturel Portfolio Tasting! 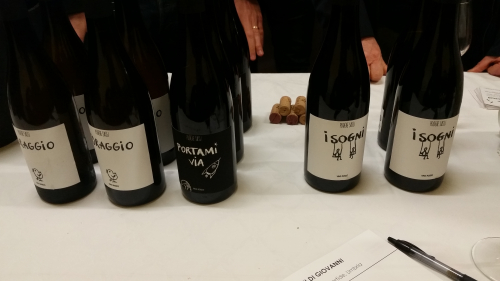 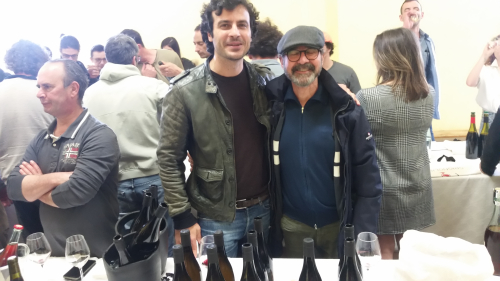 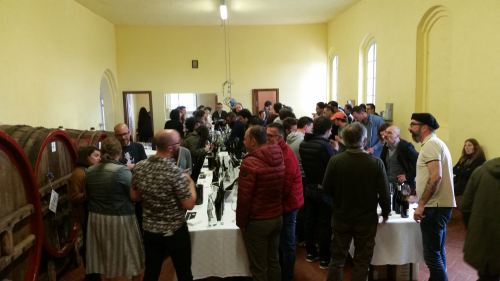 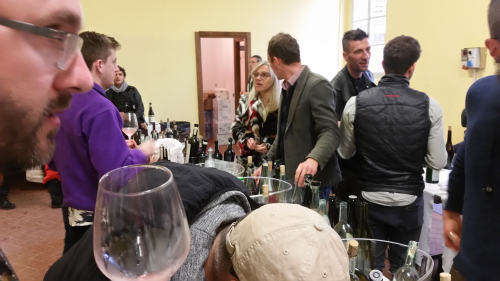 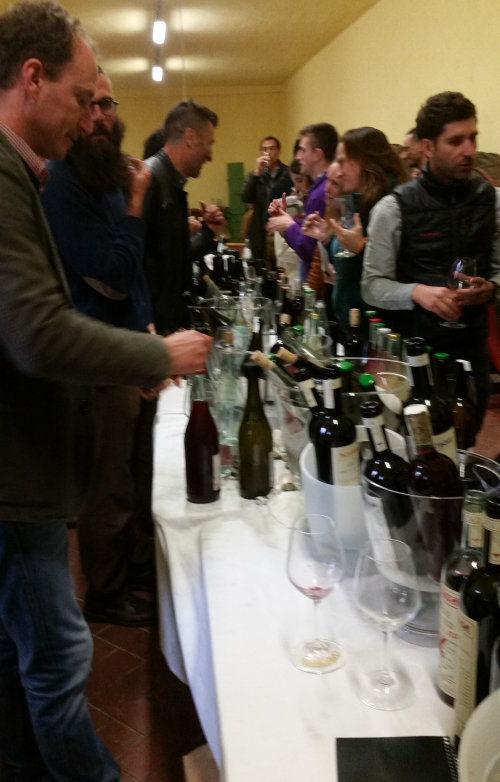 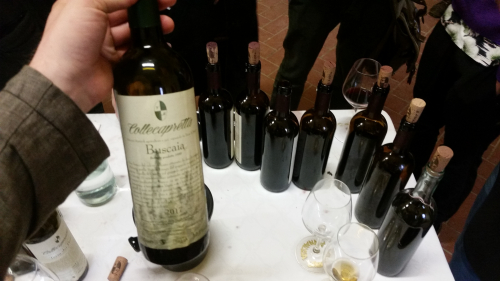 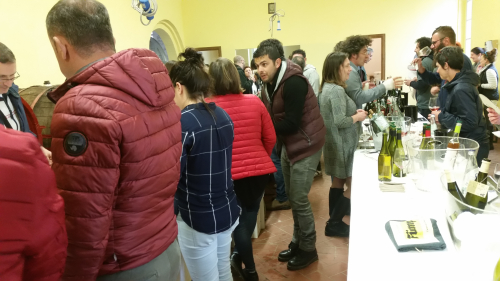 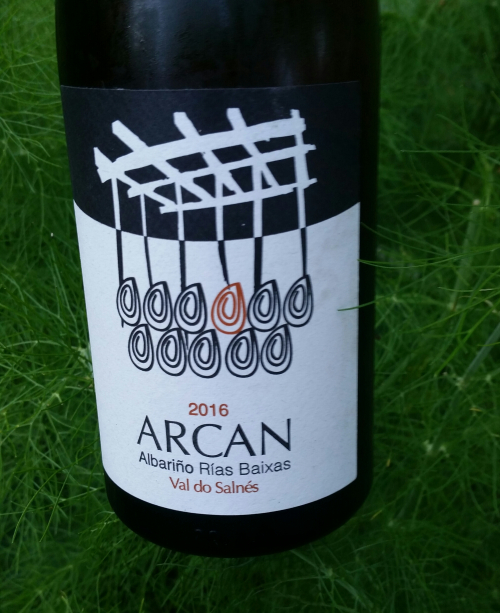 Is it weird this wine has gotten the Outkast song So Fresh and So Clean stuck in my head?  Arcan's Albarino just smells and tastes so clean and fresh and alive and like the Atlantic that I can't help it.

Arcan is made by Adega Pombal a Lanzada: a small family winery with about 5 acres in Rias Baixas, Galicia Spain.  Galicia is the rocky hilly little corner of Spain up above Portugal that sticks out into the Atlantic.  The climate is cool, rainy, and rather stormy; entirely unlike the rest of Spain.  Rias Baixas is an appellation right on the coast where deep inlets (Rias) make for great fishing and natural harbors.  The Pombal family was actually traditionally mussel farmers, but like most families here also had some vines for making wine for themselves.  At about 5 acres they actually have more land than most and so eventually made the jump to making their own wines.

The Arcan is older vine Albarino, fermented in stainless steel with natural yeast, and aged for about 6 months.  5 acres isn't much and so total production usually ranges between 1,400 to 2,000 cases per year. 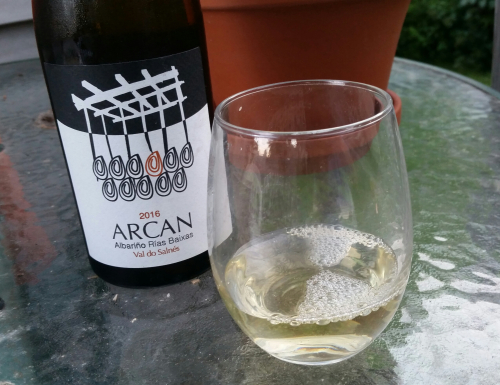 Aroma: The Arcan Albarino is more aromatic than a lot of Albarinos I've had.  There's lots of stone fruit: peaches and apricots, but also fresh lemon and apple blossoms.  The Arcan's aroma isn't just fruit though.  I feel like I can definitely smell the Atlantic in this salty oceany wet rock kind of quality the wine has.

Taste: This is fresh vivid zingy Albarino with ripe fruit (sort of white peach, lemon, green apple, and ripe cantaloupe) right off the bat.  The Arcan is very "wet".  What do I mean by that?  I'm not sure....it's very thirst quenching and somehow the salty briney rockiness makes me think of the cold Atlantic Ocean.  The Arcan is one of those wines with a juxtaposition of ripe fruit and body but also fresh acidity and dancing minerality that just pushes all my buttons!  This is a fantastic wine for almost any New England seafood, ranging from salmon to mussels, oysters, or mackerel! 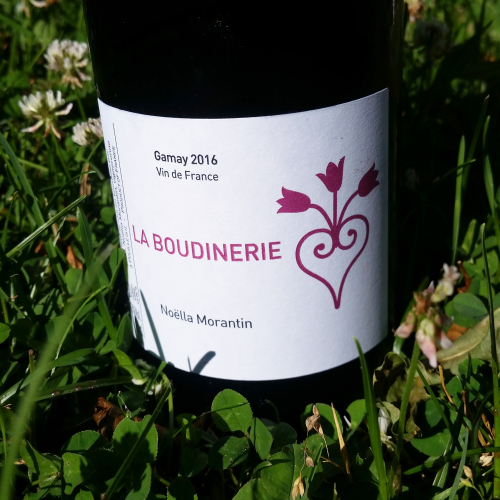 Noella Morantin is from Brittany originally but decided she wanted to make wine.  She pursued a degree in wine making in the Loire and for three years in the early oughts she worked with Agnes and Rene Mosse.  Next she spent a year working in Muscadet, and then met Junko Arai, who lived in Japan, but owned some of the former Clos Roche Blanches vineyards.  Noella began working the vineyards and making the wines for Arai.  Eventually the time came that Noella felt that she was ready to begin really on her own and so she bought and rented some of the former Clos Roche Blanches vineyards.

Boudinerie is 100% Gamay.  I know it's not carbonic and the grapes are foot trodden, but beyond that I'm not completely sure if this is a single vineyard plot or not.  It seems like it's a single vineyard wine because it has so much character and differs from normal Touraine Gamay.

Aroma: There's a surprising amount of juicy black fruit in the aroma; lots of blackberry and blackcherry.  The Boudinerie smells fresh and vibrant, like you took a bunch of fresh off the vine wild blackberries and made a granita or something.  I really don't smell too much of the gameyness or wild sort of spice that I associate with Touraine Gamay.

Taste: Supple dark fruit, but more pepper and some integrated tannins that dry out the finish and give the wine a more grounded serious character.  The fruit up front on the palate is really lovely.  It's dark, juicy, and really pretty much perfectly integrated and balanced.  I'm actually sort of shocked, this is a wine with more power and structure, but also elegance.  I think in a blind tasting I would take this for a lovely serious but drinkable now Bourgueil.  Noella Morantin's Gamay sort of does it all: it's lovely and singingly alive but very elegant with reserve depths of flavor that will do well paired with hearty foods.