I got the opportunity to spend some time with Roberto Henriquez over the past couple days.  He has a reputation for really special important natural Chilean winesI'd heard a few rumors about him and once tasted a wine of his (which was very exciting)  but I wasn't sure what to expect.  Compared to Europe Chile is much more mysterious for me.  So I was really interested to see what I could learn.  Turns out I had lots to learn!  Here's everything:

Roberto lives near the Bio Bio valley.  That's just north of Concepcion and right on the coast.  He also works some vines in Itata which is another valley to the south.  The area is about 500 kilometers from the capital, Santiago, in the north.  It's kind of rural and there are lots of small old family grape growers.

Roberto got interested in wine because he had an uncle who made wine on a small scale.  He went and studied wine making at a university, but the school was teaching modern industrial wine making.  They were teaching that you had to make wine from Merlot and Cabernet, you had to age in new oak, you had to add yeast, sulfur, acidity; all that smoke and mirrors wine making industrial complex stuff.  It wasn't what Roberto had grown up around and it didn't seem right to him.  The teachers taught that the old traditional grapes of Pais, Corrinto, Moscatel, and Semillon weren't any good.  In particular they taught that Pais (also called Misson) wasn't any good for making modern wine because it's skin is too pale and it doesn't have enough tannin or acidity.  But where Roberto was from there were vineyards of 200 year old ungrafted Pais and he felt like it was a point of personal and philosophical pride to work with these more traditional grape varieties and make wines that were more Chilean.  He felt that he made wines exactly like wine is made in Bordeaux then he wouldn't be being honest with himself or with his home.  So he threw out all the preconceptions they'd taught him and started working with the old vines of his home area.

Roberto has been making wine for about 10 years.  But the first 7 were really experimental; just learning by doing and making mistakes and working a lot in the vineyards doing consulting work for other growers.  Finally he was confident enough that he incorporated and got all the licenses to start making wine.  he started out renting space in a winery.  He has his own vineyards but he also works with about 20 small growers helping them grow grapes.  He doesn't buy grapes from all of them but it keeps him connected to more of the wine community and he learns more and helps people that way.  He does but some grapes from vineyards he helps farm.  He mentioned that in order to get the small old farmers to farm the way he wants he has to pay 3 times what the big industrial wine companies pay.  So if a big conglomerate will be $150 per ton of fruit he pays $450.  He said that many people are suspicious of how he farms and makes wine without additives.  He feels like some people expect him to fail or make mistakes and that he has to work and succeed on a very high level to win people over.   I also remember him saying it cost him $1000 to get a truck to pick up his wine and take it up to the port near Santiago.  Considering it costs me $170 to get a pallet of wine from NJ to Maine that seems pretty steep.  The relative remoteness of Concepcion must make everything harder.

The vines are all little old bush vines and have to be manually worked.  He told me that he partially destems the grapes by rubbing them over a mat of sticks over an open vat.  That's the super old traditional way of destemming: the grapes get pushed between the sticks into the vat and the stems stay caught on the top.  He also mentioned that his winery has not temperature control and because it is cool in the autumn the wines may take up to a month to finish primary fermentation on the skins.

This is Semillon, Corrinto, and Moscatel.  The Moscatel actually grows a veil of yeast on the surface as it ferments, like in sherry.  Also like in sherry his winery is just 13K from the ocean so it gets lots of maritime influence.  His white wines all come from the Itata valley

All ungrafted 200+ year old Pais vines.  This is from deep alluvial clay and sand and quartz soil down near the Bio Bio river.  This was aged in stainless steel.

The Santa Cruz de Coya is also 200+ year old ungrafted Pais from about 10 minutes away from the Notro.  This comes from and more red clay and Granitic vineyard though and it's aged in old oak barrels.  This was a little more approachable than the Notro.

I was really impressed by Roberto's quiet confident drive and casual passion.  He wasn't wild eyed and intense about it but he had a very deep and broad well thought out philosophy behind everything he was doing.  He was very committed to making wine that let the place he was from speak.  It was clear he loved the land he worked and also the people there.  He had a quiet pride in the place and people and was wholly committed to helping and improving it all through improving the wine making and holding onto the old vines and techniques that are a part of their cultural heritage and help make the place what it is. 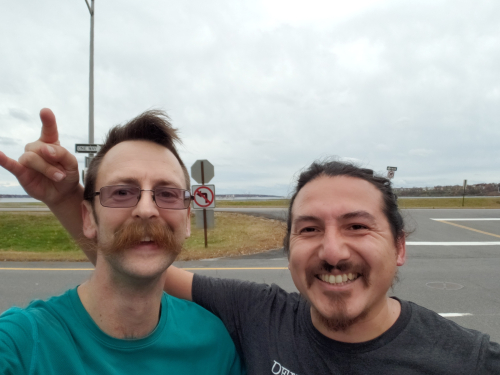