Bergey is made by Gerard Laurent, a retired successful engineer who bought this winery when he sold his company and retired.  He applied his empirical skills to the task of making wine and within several years felt he'd seen enough evidence that natural fermentations and more natural farming produced better wine and so he threw himself into making wine with less intervention.  This is his least expensive entry level wine that he makes and I think sells for less than he should just to get more people to enjoy Bordeaux! 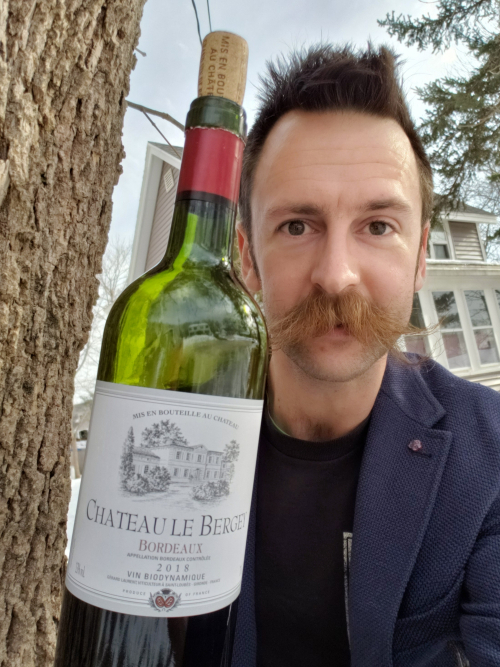 Aroma: Wow, the aroma is very nice!  The Bergey smells of juicy black brambly fruit.  There's also a tiny bit of spice to the aroma, but mostly it smells like fresh ripe blackberries that I'm just about to pick off the vine and stuff into my face.  .....I'd say there's also some tomatoes and poblano peppers growing not too far away because there's a bit of a cool leafy spice woven in amongst the fruit the aromas as well.

Taste:  .  It actually tastes darker than it looks.  The color isn't so deep in the glass, but the flavors are dark, spicy, and nicely warm.  ....Yeah, it's 2018 and it tastes young; it's like a german shepard puppy that's just too excited and can't calm down.  But who doesn't love puppies?!  The 2018 Bergey is juicy and ripe but what makes it awesome is that it's got real tannin and good tart acidity that makes the wine taste...real.  It's not just ripe fruit as many wines at this price are: the Bergey tastes more vivid like tart ripe cherries and a bit of dark chocolate...like 70% dark chocolate.  It's also got that black pepper little bit of bitterness rounding out the friendly fruit which is exhibit A in what Merlot should be and why Merlot is famous to begin with.

This is very good Merlot.  Everyone who thinks they don't like Merlot should drink this just to make sure.  Because this is so good and so honest and compelling without being over the top or annoyingly one dimensional.