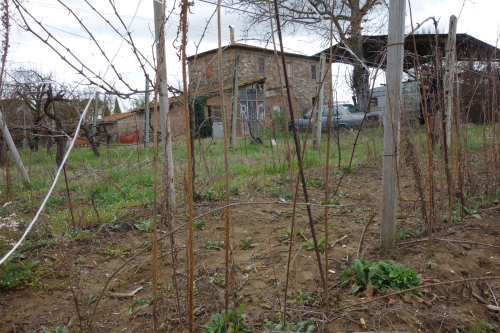 The lovable wreck that is the Ceppaiolo winery

Saturday we were all kind of hung over but we headed out to Ceppaiolo.  Danilo let me drive the Audi.  It was very fast.  the technology is pretty bleeding edge stuff.  We got to Ceppaiolo quickly....  Ceppaiolo is a fantastically decrepit falling down little brick work shop with random junk around it such as an old fiat sedan and a moldering camping trailer.  It's in a sort of weird suburb area of the town Bastia.  Danilo uses it as sort of a test vineyard.  There's no family depending on making wine from these vines in order to pay the bills so Danilo can sort of do whatever he wants and experiment with old wine making tricks and ideas he's just heard stories about.  As far as I can tell he never makes the same wine twice here.  It's all different depending on the vintage, what ideas he wanted to try out, and what batches of wine work and which fail.  So it's super unusual and really almost not a commercial vineyard.  He sells the wines, but selling them and making money isn't even the goal, the whole point is just to experiment and gain more knowledge.  If you ever see any of these wines out in the wild they're always worth grabbing because they'll be an unusual unique experience; you'll learn something and it will be a wine that will never exist again. 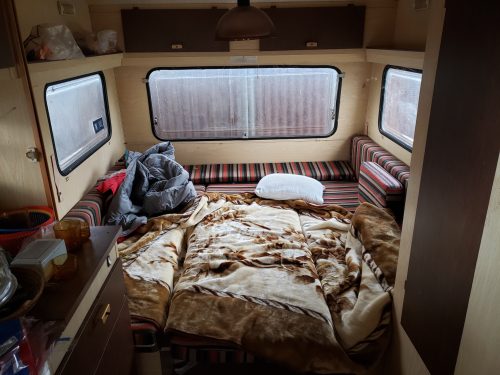 I was threatening to move into the derelict camper.... 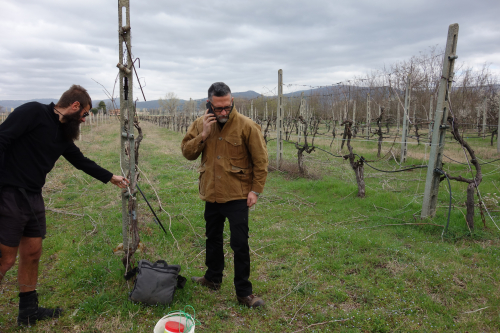 Eventually Danilo finished on the phone and we went to work

There were a bunch of Grechetto vines that Danilo wanted to graft over to Trebbiano Spoletino.  Nothing against Grechetto but Danilo just really wanted to have more of this particular local type of Trebbiano. 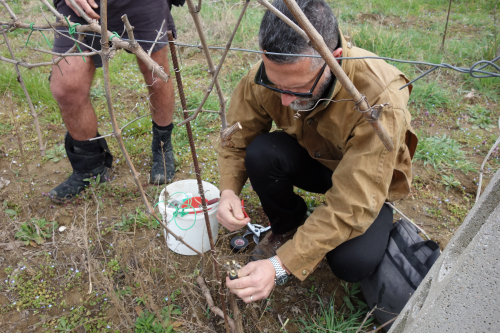 First we cut a 1 year old branch ( a bit thinner than my pinky finger) that already had sapp running in it off of a Trebbiano Spoletino plant.  Then we cut that branch into sections.  Grape vines grow in these sort of segments, generally 3 or 4 inches long between joints and the joints are where the buds with grapes and eventually other branches sprout from.  So once we had the pieces of Trebbiano Spoletino prepared we went down the line of Grechetto vines looking for ones that were thick enough to graft: at least about an inch in diameter.  They were all grafted Vines to begin with so we would cut the vine's trunk off just below the old original graft.  That way no grechetto was left, just whatever the original rootstock was.  Then we would use a very sharp little knife to make a slice straight down into the top of the vine's trunk, about1.5 inches deep.  After that we would shave down the end of one of the Trebbiano cuttings into a sharp wedge shape and work that down into the cut.  It was important to keep the surface of the vine flush with the side of the Trebbiano cutting being inserted so that the bark would grow over quickly and well.  Always we shaved down the end of the cutting opposite the joint and potential bud.  Once we had two cuttings (to double the odds that at least one would take) we would wrap the trunk of the Vine with tape to keep everything tight and sealed.  Then a special paste was put over the whole thing to make sure it was protected from drying out or bacteria.  And that was pretty much it! 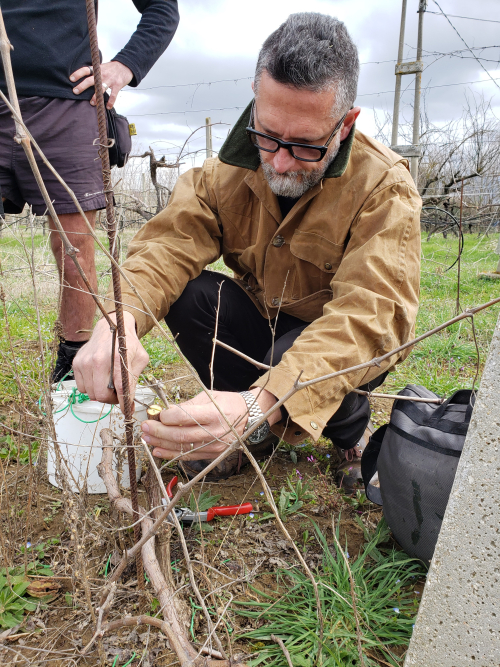 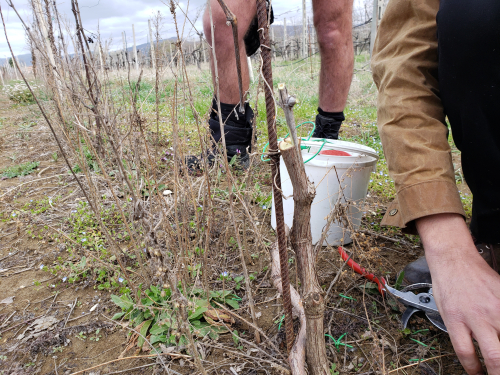 wedging one of the Trebbiano segments into the trunk of the vine. 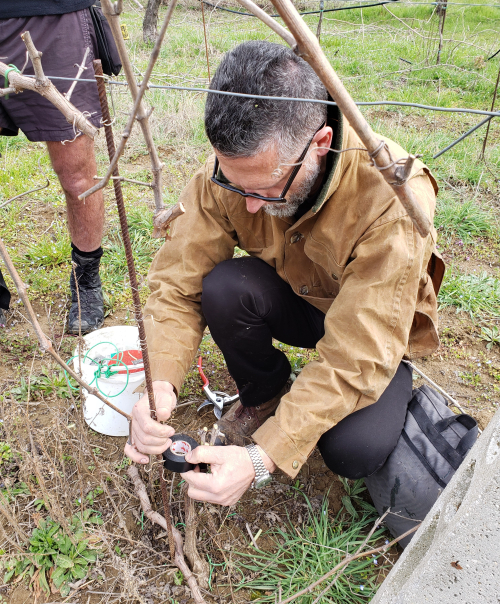 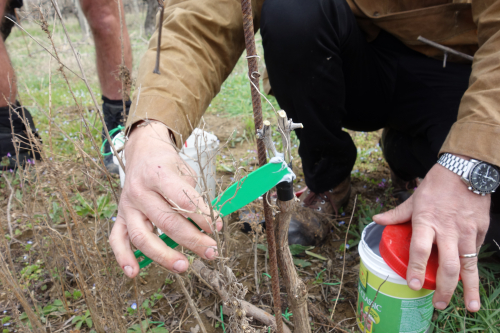 Final Step: putting the wax on after the graft is done. 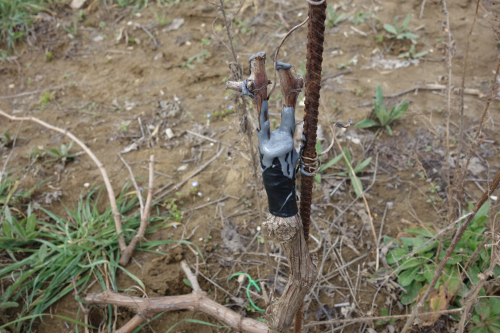 the finished product
It was pretty special to be there in that odd Italian suburb and be doing a wine growing practice that has existed for thousands of years.  Aside from having tape and swiss army knives now, the actual process hasn't really changed in all that time.  Getting to do something like that which wine makers thousands of years ago would have recognized and have had the same sensations of feeling the vine's bark and whittling down the branches into wedges: it was a powerful experience.
Here's a whole damn How Too video that Danilo and I made!
We went inside and found some moldy decomposed food in the fridge.  Riccardo showed up on a moped and brought us bread, cheese, and salami.  And then we tasted the two new Ceppaiolo wines this vintage.  Danilo had not made a white: just a rose pet nat and a still red.  I forgot to ask why no white.  I think he used all the grapes for the pet nat which seems to be a mix if everything but direct press and no skin contact. 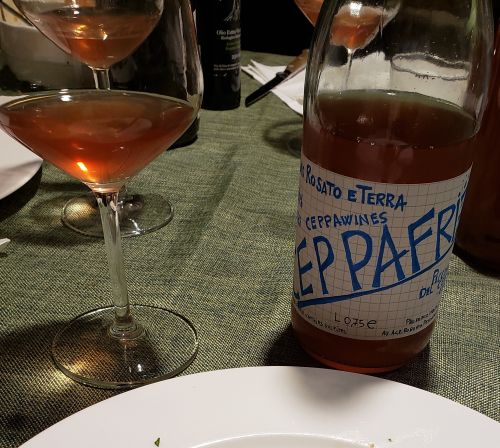 Both wines kicked ass.  The petnat was juicy wild wacky and had a tiny bit of residual sweetness but it came across as racy and full of life thanks to the bubbles and minerality.  All that intense pink grapefruit.  This was in fact the coolest wine that I tasted in the whole trip in Italy!
The red was really great and surprising.  Very clean and clear and focused.  It was light and clear but with intensity like an alpine red.  It was taut like I could pluck it with a finger and it should vibrate.

Tasting the CeppaFrizz with Danilo