I left Dora and Sanguineto and blasted over to Monte Melino outside Magione in Umbria.  It was close and the Alfa was very fast.  I arrived a bit early but Marco was there at the wine garage to meet me.  We walked over into the vineyards.  They were kind of over grown and Marco described it as being like the Amazon.  Danilo generally waits until later into the spring to prune in order to delay bud break and avoid some risks of late frost killing the buds. 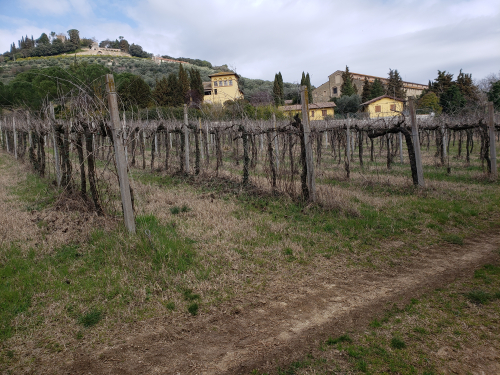 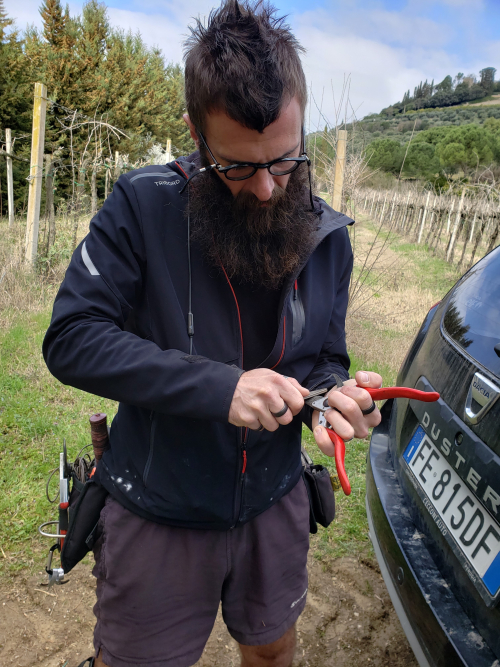 Marco sharpening up some shears for me

Danilo pruning an old Grenache vine.  Interestingly he thought the trunk was too large, dried out, and old to effectively produce grapes so he makes a shallow cut in the bark low down on the trunk in order to stimulate new growth there when the vine heals.  Then a year or two later he will cut off the old dried out trunk.

Marco and Danilo were discussed everything as they went.  They kept telling me the same things but then doing conflicting things as they pruned but by watching I started to get a feel for what the strategy was.  We were pruning older Merlot vines that had been grafted over to Aleatico in the previous spring.  On some plants the grafts hadn't worked out, so with them the strategy was to prune back enough so that the vine wouldn't produce many grapes (Danilo didn't really want to have Merlot that he would then have to do something with) and also leave one good promising branch that could grow thick enough to attempt grafting again the following year. 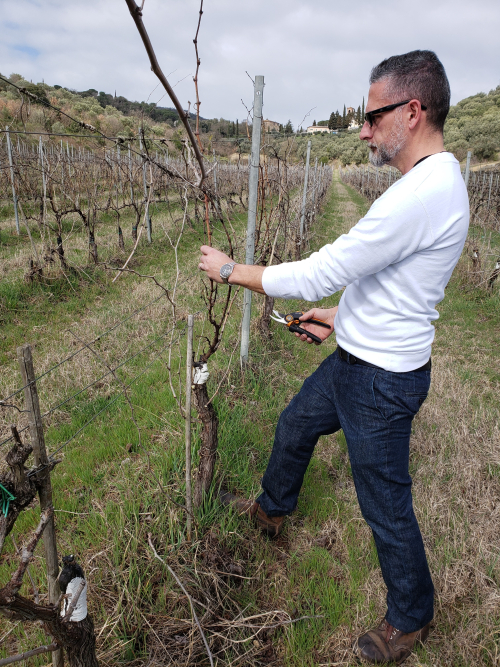 On the plants where the graft had worked out we would prune most of the new growth but leave two stalks to grow grapes and leaves from.  We would cut off the gemma (proto buds) from the trunk, but leave them on the two branches we were encouraging.  Part of the trick was choosing solid branches that were close enough to the trunk to get plenty of nourishment from the roots.  Then the branches had to be preliminarily trained in order to make room for the other vines on either side.  Shoots from below the graft (which would be Merlot) were all cut off.  Extra old growth would be cut off, including possibly the trunk or larger branches.  If we were cutting larger branches or the trunk off we had to make sure to do it at least 3 inches up from any branches that we were keeping.  The idea was that if we cut a stalk or trunk off there would be drying and possibly bacterial contamination an inch or two down the stalk from what we had pruned.  Leaving a buffer of at least 3 inches was enough to avoid that drying from interfering with the circulation of sap to the new branches.  Danilo called this the Respect Cut 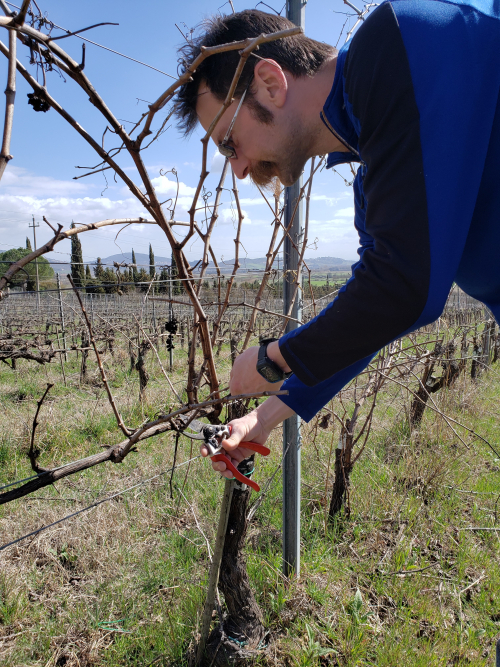 It was a bit different from normal pruning because Danilo was intentionally trying to leave several young branches and a bunch of buds to encourage more growth and production.  This is counter to conventional fine wine philosophy which is that you try to lower yields to concentrate the flavors more.  The thing is that Umbria is warm and sunny so ripeness isn't much of a problem.  Instead of pruning aggressively to limit yields and raise the wine's concentration, Danilo was looking to encourage a relatively larger production so that the grapes would have good flavor but the wine wouldn't have too much alcohol.  The idea being that very ripe grapes with high alcohol make it hard to taste the complexity of the terroir.
Danilo explaining to me how to prune