Visit to Cantina Ribela in Frascati 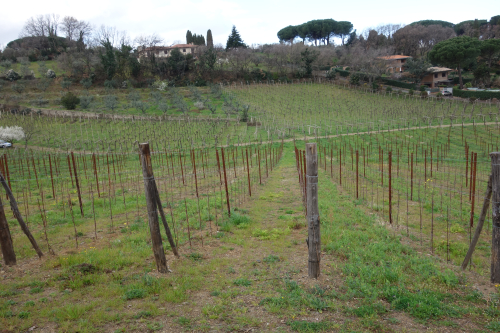 Ribela is hard to describe.  It's like trying to describe a dream, because actually that's sort of what it is.  Chiara and Daniele together became fed up with Rome and developed a passion for natural wine in around 2010.  In 2013 they started working with Danilo Marcucci at Vigneti Campanino up in the mountains of eastern Umbria.  As they cut their teeth there they simultaneously started looking for a unique vineyard closer to Rome, the locality they had grown up in.  In 2014 they found it: a tiny 2 ha vineyard in a pocket sized valley perched up in the Castelli Romani above Frascati.  It looks down on the chaos of Rome just about 20 minutes away.  The vineyard is a reality bending bubble high up in these extinct volcanic hills pretty much invisible and difficult to find.  Sheltered by the hill sides around and full of healthy vines, fruit trees, and olives the atmosphere is tranquil and rural, but Rome is visible but silent, there in the distance.  Not only that, just a 1/4 mile away, over the hill is a busy commuter street with cars and trucks whizzing by on as everyone rushes about their business.  I know, I went running back and forth and all up and down around the winery in the Castelli Romani and I almost got hit by cars at least 3 times trying to navigate the round abouts! 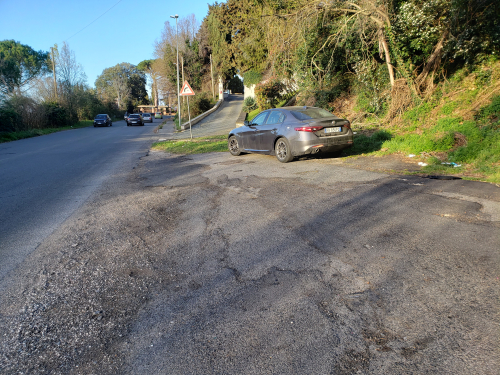 In the afternoon before I went to Ribela I really wanted to go running in the Castelli Romani, but there didn't seem to be anywhere to park in order to enter the hills and their trails, so I ended up just leaving the Alfa in this turn off for about 40 minutes while I ran all over and up and down the back roads. 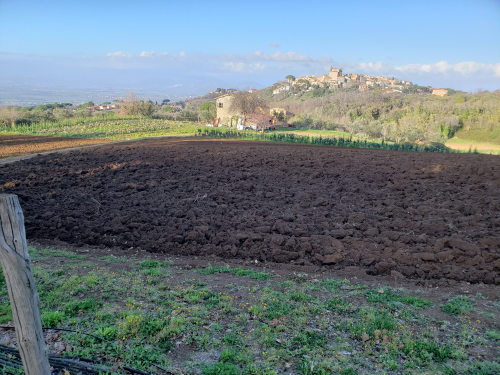 Here's another view from up on top of the Castelli Romani.  The views were great and the hills were a great work out. 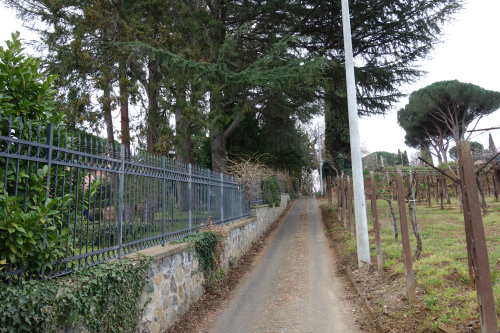 This is the road to Ribela.  Not the easiest to find!

As I understand, the vineyard had previously been owned by an old man who had a bakery in Frascati and maintained this tiny vineyard.  He never sprayed pesticides in it and, in addition to vines of traditional grape varieties like Cesanese, Malvasia di Candia, Bombino, and Malvasia di Lazio there were cherry trees, olive trees, pears, and a peach tree.  All the flowering trees blossomed at different times and helped to bring more insect and animal life into the vineyard.

For the first couple years Daniele and Chiara rented space in a co-op winery to make their wine.  In the two years after they first bought the vineyard they managed to add one more hectare and they broke ground on a new winery/house.  Oh, and they had a baby too.  So it was a lot in the space of 3 years.  I got to see it in early 2017 when they had just started to excavate and pour the foundation for the new winery.  I remember how cool it was to see all the volcanic sand and strata in the soil thanks to the excavation!  Now the winery is built and Chiara and Daniele are living and making wine there.

I arrived in the early evening after an hour of running up and down the Castelli Romani all around the winery.  Daniele and I took our time walking through the vineyards and new Cantina and let our conversation wander along with our feet.  He'd just planted a new vineyard of about a hectare.  While he really likes the pergola training method he had had to remove some because the vines had been too much of a field blend and the drastically different ripening times had made working them too complicated.  He's been planting some more red grapes: Aleatico and Cesanese.  He was clear that the Cesanese is a local version, different from the better known Cesanese de Piglio from the hills further east.  He's proud of the old style pergola system the vineyard has.  He was saying that originally it was created to spread the leaves more and help production, but it also has the effect of better shading the grapes and helping to keep them from getting desiccated by the intense Roman sun.  It helps provide more shade and maintain acidity and he thought it was a primary reason he was still able to make vibrant  lively whites in 2017, a year that was very hot and dry and that many wine makers struggled in. 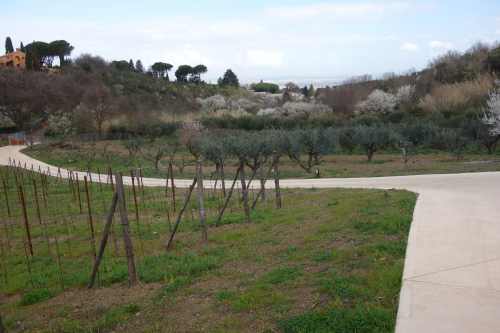 There's Rome down there in the background!

Here's a longish video of Daniele talking about his vineyard and what he's doing.  Why take it from me when you can hear his own words on it?

He remarked that pergola training had been banned in DOC Frascati now because the association thought it made for higher yields and less ripe grapes.  He felt that in such a hot sunny place as central Lazio too much ripeness and too much sun is more likely a problem.  Also he thought a reason that the pergolas weren't allowed any more was that you couldn't really work them mechanically with tractors and mechanical harvesters and there's a big push to get all the wine makers to upgrade to modern equipment to the benefit of the manufacturers of modern tractors and harvesters.   He said that the going rate that the big companies paid growers for 100 kilos of grapes in Frascati was about 30 euros.  Half of that is payable by Christmas of the year the grapes were harvested and the other half over the following 3 years.  Neither of us could imagine how a farmer could really support and family on that and have a sustainable life.  Daniele said that back in the late 90s the rate had been nearly 90 euros.  So the rate today is a third of what it was 20 years ago and that doesn't even account for inflation.  No wonder Frascati has a low reputation and the wines aren't very good!  Anyway, the point is that this is part of Daniele and Chiara's motivation for Ribela: trying to break out of this broken system and find a way to live with the land and make wines that are more sustainable.

The new winery was also super impressive.  The attention to detail and thoroughness was slightly intimidating for someone like me who is comfortable in a low level of chaos.  But everything seemed very well thought out for the flow of wine and work and processing.  Daniele used to be an architect and he had already spent a couple years making wine when he designed the winery so he had a lot of very clear ideas of what should be where in order to make it easier.  For me the most impressive part were the barrels. 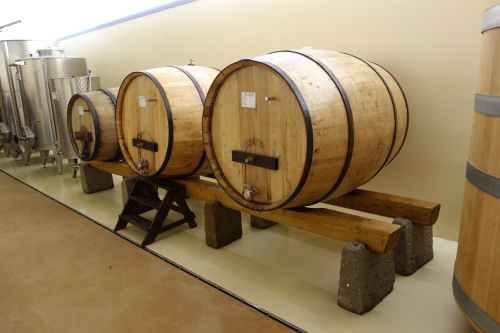 The 1st chestnut barrel is on the left, the cherry wood barrel is in the center, and the newer chestnut on the right.

Here's a quick video of the barrels and cellar.

They had found an old artisan cooper to make a traditional chestnut cask for them.  The hoops were clearly hand worked.  then after that first cask he had had the cooper make a second slightly larger cask and then another of the same size out of wild cherry trees from the Ribela property.  Cherry wood and chestnut are both traditionally used for making wine casks, but they interact with with wine differently than oak does.  Daniele and Chiara aren't exactly sure how yet, but they gonna find out! 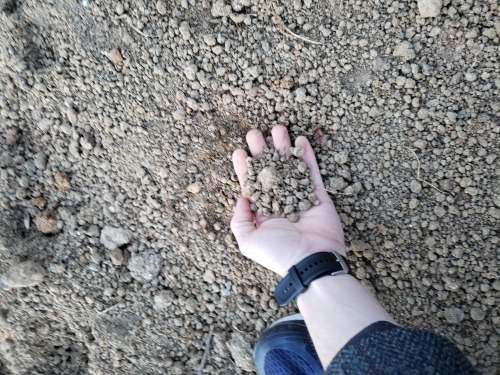 Here's some of that interesting volcanic soil.  It was gritty and beaded up on the surface of the ground. 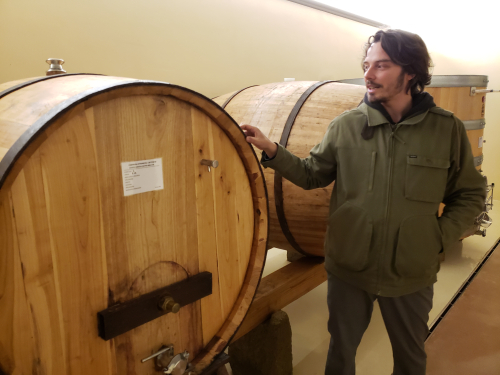 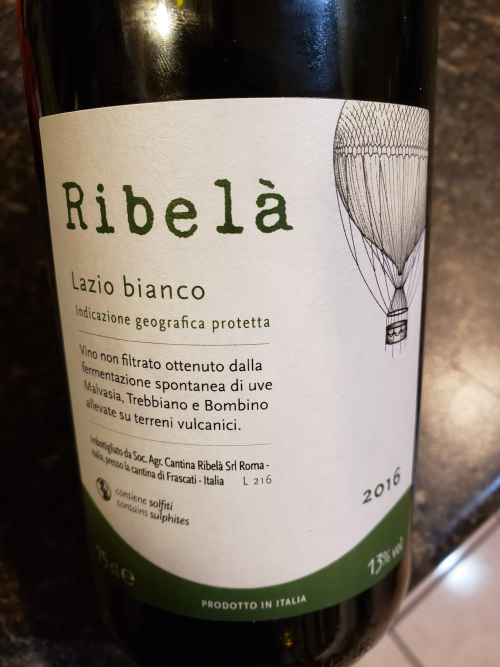 The more Malvasia and Trebbiano from around Central Italy that I drink: the more I realize how unique these wines are.  They have the body that I have come to expect from these varieties, but there's an elegance and poise and refinement that I don't think I've tasted anywhere else.  The fruit is lush and giving, but there's also a vital intense minerality.  I don't know why, it's probably a complicated mix of they're wine making, the techniques that Daniele and Chiara are using in the vineyard, the elevation and exposure of the vineyard, and of course there's also that gritty volcanic soil.  After talking with them into the night about our experiences growing up and values in life and wine, one of my big conclusions is just that: that these wines and the place are unique.  Sure there are other people making natural zero sulfur wines, but these have a very different character and voice.  2017 was only their 4th vintage.  If they were somewhere like the Loire valley or in Tuscany I'm sure they would have gotten much more attention by now.  But because Frascati is just known as simple mass produced wine they're sort of in a compelling natural wine dessert; it's the idea that the best place to hide is in plain sight and as a winery Frascati is very much a great "hiding in plain sight" spot.  Daniele and Chiara recently ended their relationship with Danilo Marcucci so all the decisions are solely their experience and intuition now.  The wines that are absolutely worth seeking out and I think it will be really exciting to see where they go as they develop.

Here's another view of inside the winery