The Contrada system on Mount Etna

I recently spent 4 days on Mount Etna and visited Passopisciaro, Frank Cornelissen, I Vigneri & Salvo Foti, Eduardo Torres Acosta, and SRC Vini.  I work with Frank, Passopisciaro, Eduardo, I Vigneri, and Romeo Castello so I wasn't just there for fun.

Etna is to me one of the most exciting wine regions in Italy.  Top reason is the land and climate.  I mean; it's an active volcano that is also the tallest mountain in Italy south of the Alps.  The steep terraced vineyards crawl along the broken surface of the volcano, sometimes facing, east, then north, then west, and back all in the space of a few 100 meters.  The weather can go from raining to sunny or even both at once in the distance of a Kilometer.  Sicily and Etna are just off the coast of Africa, so summers are long and warm, but up on Etna vineyard temperatures can swing by 25 degrees Celsius between day and night.  Warm salty humid air comes of the Ionian sea and runs smack into cold air cascading down from Etna's almost 11,000 ft peak.

A result of that crazy terroir/weather and Etna's heritage of small contadino farming, Etna has an interesting system of named vineyards.  It's sort of like premier cru vineyards in Barolo and Burgundy, but not as codifed yet.  Most all of these vineyards have existed as named entities for generations as names used by the locals to understand and talk about the crazy volcano landscape they were farming.  Just like Burgunday, Barolo, and Barbaresco most of these vineyards have many owners who each have different pieces.  So the names aren't recognized or controlled by any regulatory body and as such borders are fuzzy.

The Contrade (as they're called locally) are important and each has its own character.  Etna is still emerging as a world class wine zone; in 2012 there were 30 something wineries and today there are more like 130.  More and more wineries are bottling individual Contradas separately and putting the names on their labels so I'm sure that over time borders and recognition will firm up.  As my contribution to moving that process along here's all the info I've got, including a fantastic map! 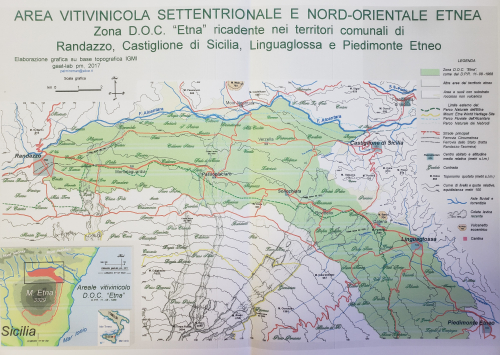 I'm so excited to have gotten my hands on this map.  It's hosted here in high res so click on it to open it in a new window and then zoom in to get a better view.

Land, weather, terroir are just pieces of what makes a wine.  There's also farming.  And wine making.  The Contradas are important because they are part of how the people on Etna understand and make sense of farming there.  So understanding them can help you better understand the wines.  But you can't boil wine down to rocks and sun.  The decisions made by the farmer/winemaker about whether and how to prune, when to rack, whether to allow cover crops, whether or how much to work the soil, how to press, do you press?  do you just use free run juice.....   So wines from the same contrada but made by different wine makers are obviously going to taste very different.  Frank and I spent an afternoon drinking wines from the same contrade specifically to make that point.  Thanks Frank! 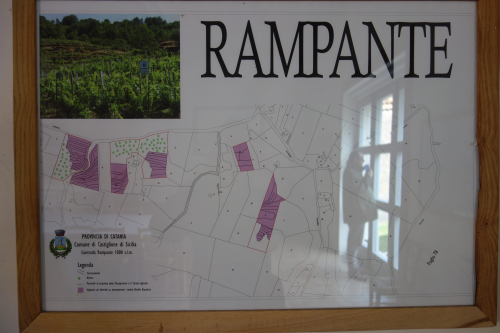 Here's a great example.  Frank and Passopisciaro disagree about where the borders of Barbabecchi and Rampante are.  So the picture below of Frank's sign saying "Barbabecchi" is only a couple hundred yards from Passopisciaro's sign saying "Rampante".  It's hard to tell from the map above that shows Rampante, but Contrada Barbabecchi is also listed there. 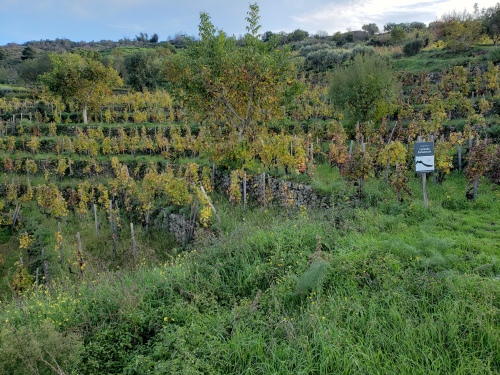 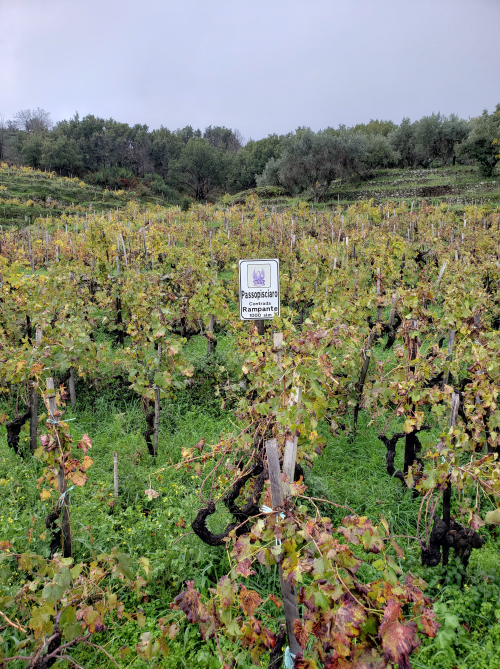 I think Frank maintains that Rampante is lower down in between Marchesa and Monte Dolce. 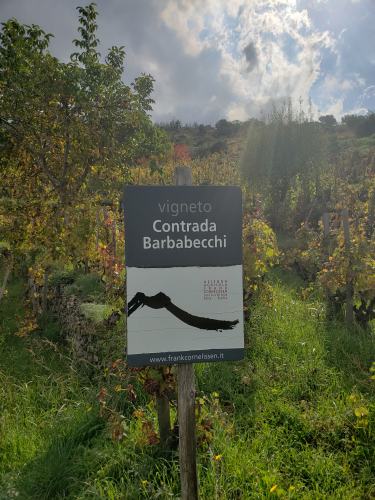 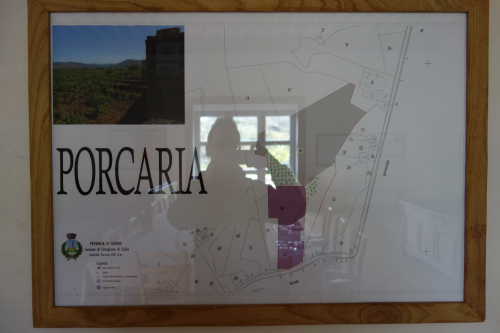 I don't even see Porcaria on the big map.  I know it's somewhere in the Solicchiata area, but I didn't visit it this trip.  I did go visit it 3 and a half years ago though with Vincenzo from Passopisciaro.  It's flatter and several hundred meters lower down than Barbabecchi.  The soil seems to be finer and Vincenzo said the wine from here is usually a little richer, finer, and approachable a bit younger. 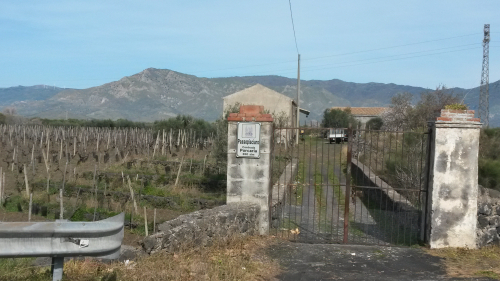 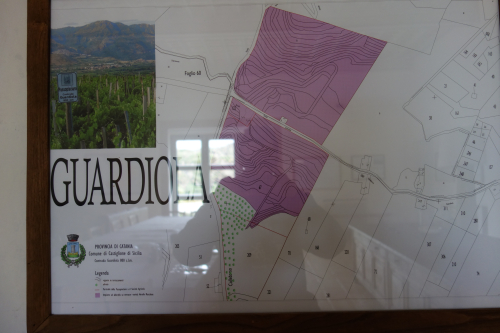 Guardiola is another high elevation vineyard near Barbabecchi but maybe a bit more exposed.  Andrea Franchetti's Passopisciaro winery is actually located here in the middle of the vineyard.  The higher reaches are really up there and I think Franchetti has mostly planted that part to Chardonnay.  Lower down near the winery he's planted some Petit Verdot and Cessanese.  Below that there's old vine Nerello Mascalese. 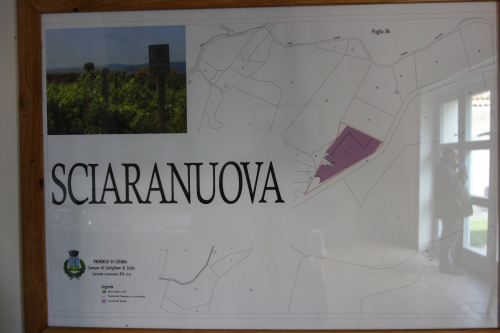 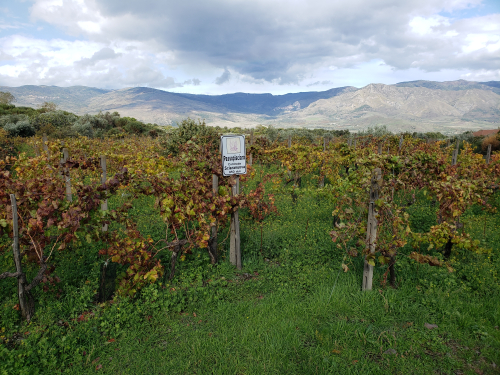 Sciara Nuova is over in the west of Guardiola and at slightly less elevation over all.  Guardiola is a bit steeper, extends further up, and the folds of the land face sometimes more east or west.  Sciara Nuova, at least what I saw, was a bit more just north facing and open, probably getting great sun and also plenty of wind. 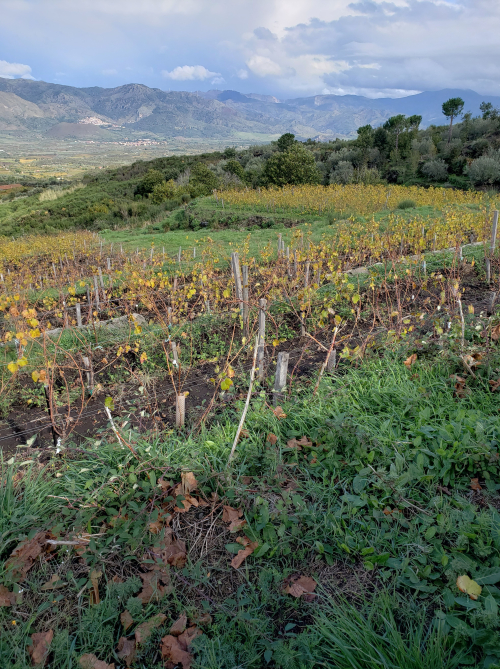 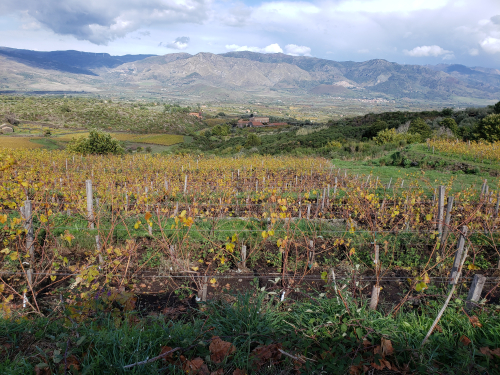 Monte Dolce is on the first map of all the Contrade, but it's show as an actual peak: the sweet peak.  Vincenzo explained it as a newer (like several thousand years old) volcanic vent up above Solicchiata.  I ran all back and forth through and around it and it seemed generally more flat and there was a lot of new planting in it. 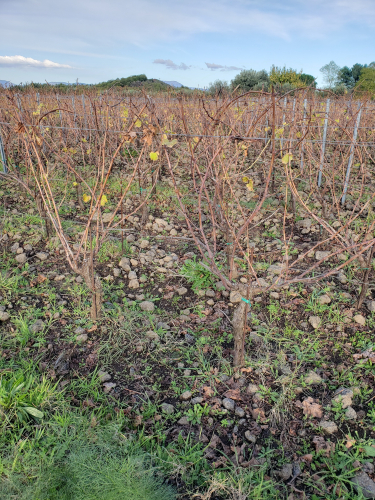 Here's some new planting by Passopisciaro in the Monte Dulce Contrada.  If I understood right, the little hill just beyond the vineyard is the actual Monte Dolce. 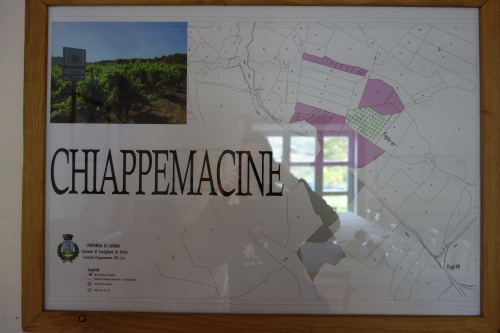 I totally can't find Contrada Chiappe Macine or any of the other Contrade shown on this specific Contrada map on the big map up top.  And I've never visited it.  But it's lower down and abuts a more recent lava flow.  Oh well, next time I'm back on Etna I'll go find it. 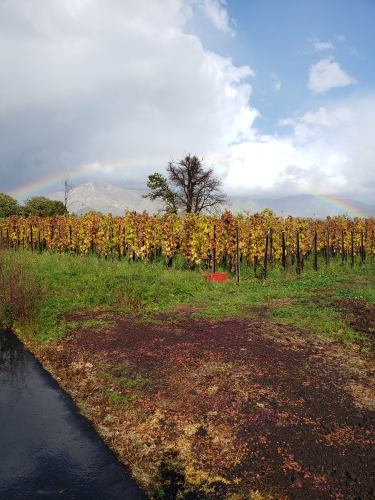 I visited SRC Vini and their winery is right in the middle of Calderara Sottana, so here's a picture of that.  Again, a bit lower down and at this spot not terraced. 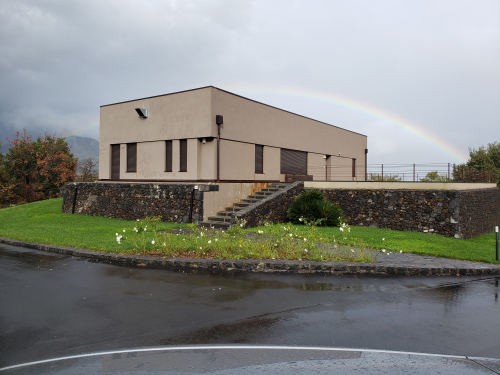