Visit to Lamoresca in Sicily On my second day in Sicily I left Etna and headed south in the general direction of Gela on the south coast.  It was rural rolling farm country interspersed with just empty sharp rocky ridges.  I found Lamoresca without much trouble though. Lamoresca is nearly an houra and a half south but you can still see Etna on the horizon hulking over all the hills. 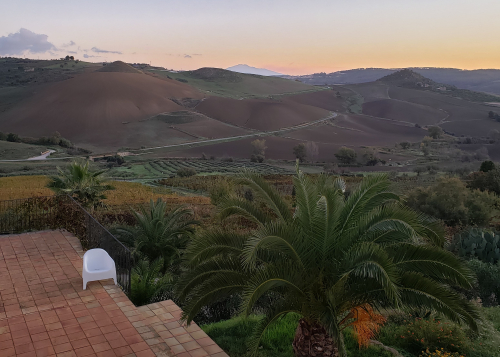 Filippo met me in the driveway but was clearly worried because I was early and he was doing 5 things at once.  I assured him that I had come early specifically to go running, so I took off for an 8 mile run and he finished up what he was working on. 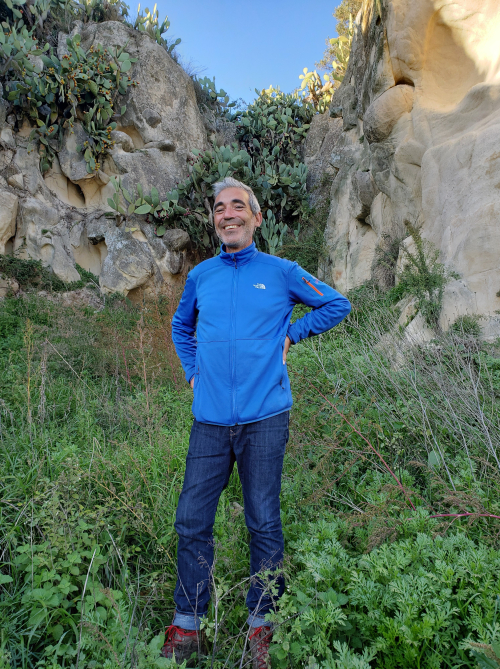 When I got back Filippo was all fired up and immediately took me down the street to see his new project: a giant outcropping of eroded sand stone rock that he'd bought!  Hooray!  It's actually super interesting and unusual for the area (mostly rolling hills of sandy clay) and it came with an abandoned house, over grown prickly pear cactus orchards, and more olive trees. 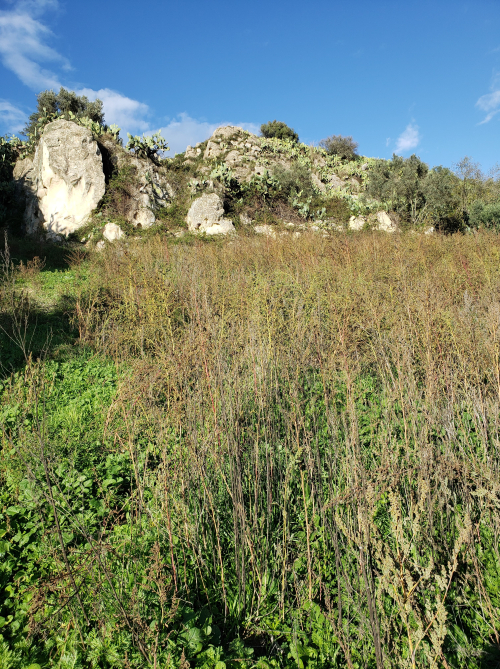 I think it's something like 12 hectares in total that he just bought!  The soil was really unique: super light airy very fine eroded sand that compressed and was springy under my feet; it made me think of videos of walking on the moon.  Filippo is mostly going to plant olives and cactuses here, but he is planning a few hectares of Frappato on an open piece of sand.

Here's a video of Filippo and I talking about the soil. 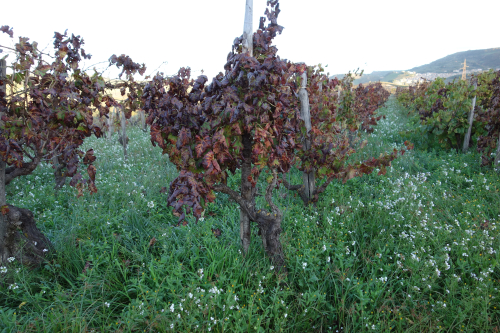 Filippo explicitly said that he thinks of himself as a farmer and not as a wine maker.  Most everything he talked about was planting this or that, the work trimming, the cover crops he's working with, and the new agronomist he's hired to try to fine tune the natural ways he tries to keep the vineyards healthy.

The prickly pear cactuses were so overgrown and covered in brambles that you couldn't even see the rock outcropping.   The property had been abandoned for 30 years so Filippo has had a great time going through cleaning and cutting and exploring.  There's also an old house on the property and workman were in the process of putting a new roof on it. 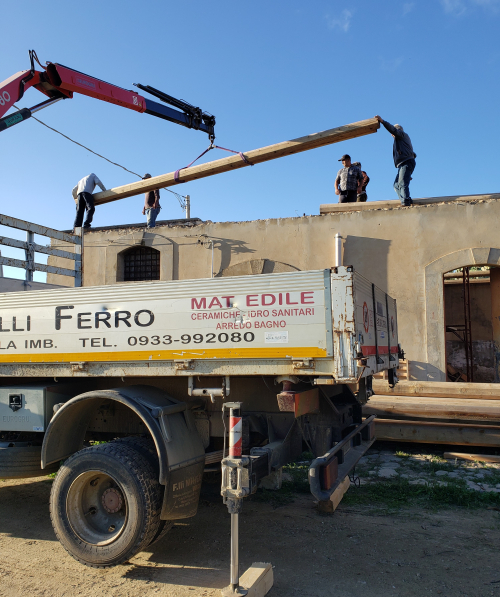 Filippo plans to make it into several apartments he can rent out as a sort of agri-tourismo.  He's trying to make the house pretty authentic and what a Sicilian house would have been like a couple generations ago.  He even bought old used hand made terracotta tiles for the roof instead of new ones.  Is all the work really worth it?  Probably not according to Filippo, but he sure does enjoy it and that's why he's doing it all.  He just really loves farming and the land there! 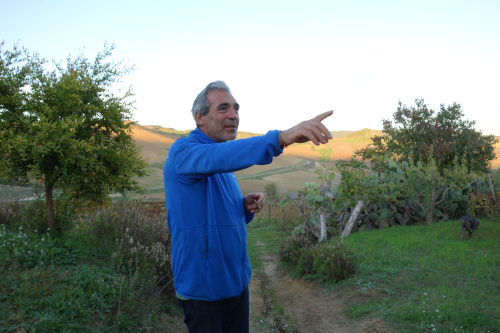 Filippo had also planted a couple hectares of fava beans so that he can harvest and then plant them as cover crops on his vineyards as opposed to buying seeds like he does now.  Currently his vineyards were planted with a mix of herbs, daikon, fava beans, and chick peas in order to replenish nutrients and aerate the soil.  He was super excited about seeing the new cover crops starting to come up and how the daikon roots would help work the soil with out anyone manually doing anything.

Then we tasted through all the Lamoresca wines that were in tank.  They were so beautiful!  I write about good wines very often, it's sort of what I do, but the Lamoresca wines have an energy, purity, and beauty that's really rare and on another level.    He talked a lot about how he wants to make "True Wine" and doesn't want to get pigeon holed as Natural Wine.  He does farm naturally and ferment with wild yeast, so yeah they are natural wines.   I get the feeling he's uncomfortable with having any label attached to himself.  He seems to like doing things his own way.  That's probably part of why he chose to make wine in an area where no one else is (and that he's from there).  He doesn't want his wines to be thought of as Natural Wines because he doesn't want to be a part of a "movement", also because he feels that the natural wine movement is too excepting of flawed wines and that some "Natural" wines don't actually express terroir.  One example he offered was a pet nat made in a hot sunny place, but harvested early when the grapes weren't too ripe in order to make a light and easy drinking wine. Filippo argued that doesn't really express the climate and terroir, which is a pretty fair point.  In a pet nat like that you're tasting technique more than anything else.  As an after thought as he was turning out the lights in the winery he said "oh yeah, this is the winery." 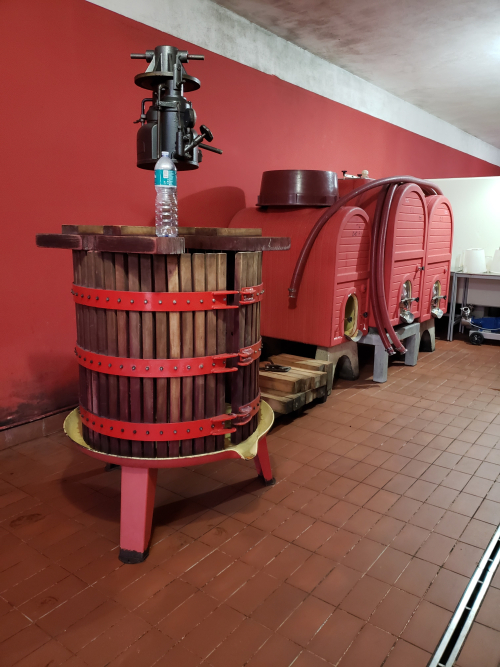 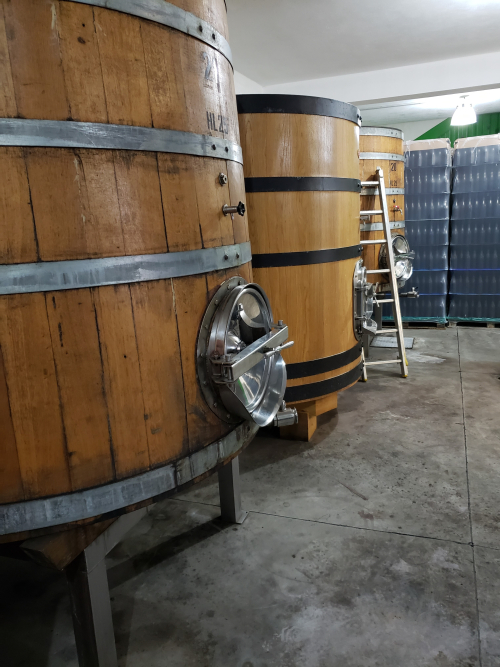 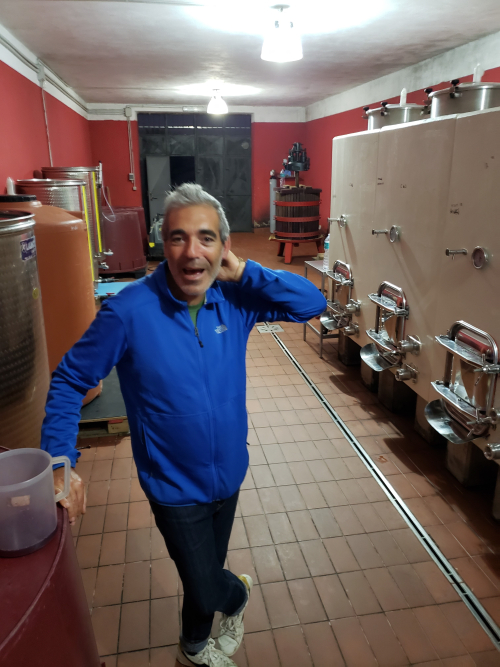 He quickly ran through "the grapes come in, they ferment in open tanks, I press them off with that wooden basket press, I've got those cement tanks and botte back there."  He was very clear that he sees all the real work happening in the vineyard and then he just keeps everything clean and precise in the winery and makes sure the wines are doing what they're supposed to.  He's pretty much there at the winery all the time and tastes the wines in tank and barrel every day so he has a very clear understanding of how they're evolving and if he needs to do something like rack a wine to a different tank. 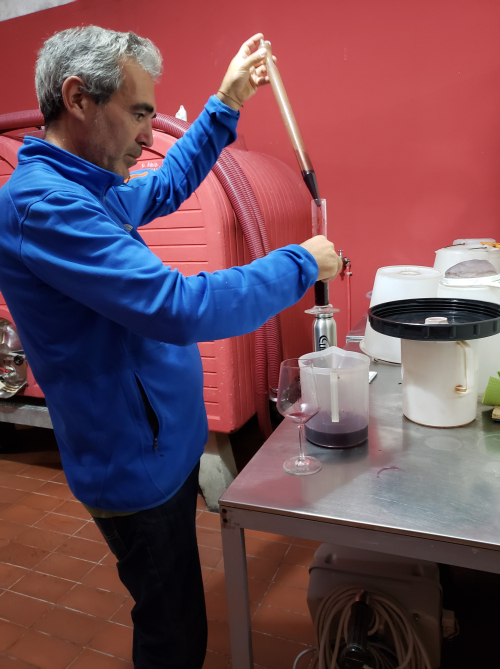 In another contrarian mood he talked about how popular his Frappato is and so as a result he's decided to focus on Nero d'Avola because he thinks it's under appreciated.  And I have to say his Nero d'Avola was searingly good and drank like exciting lush racy Morgon.

When I asked why his wines are so pretty and precise he would only say that it was a reflection of his personality and that it was due to his excellent memory of everything he has tasted over the years.  There was a real continuity of thoroughness and thoughtfulness and aesthetics through everything around the azienda and he was up front that he takes pride in it.

Some of that awareness comes from the many years he spent in Belgium running a restaurant and selling wine there.  It gave him more of a cosmopolitan understanding of wine culture than the average farmer.  He moved there to follow his Belgian wife (they'd met in Italy), but after over a decade he decided he wanted to start spending more time back where he grew up in rural southern Sicily.  He bought the land that would become Lamoresca in 2000 with plans to plant olives on it.  At some point though Filippo started to think "why not plant vines too?"  And so he did in 2005 and slowly, little by little, he started on this path. 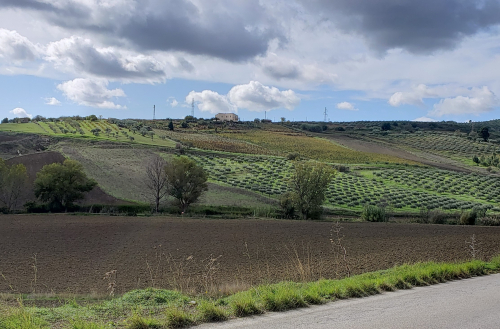 Here's the view looking back over the hills at his winery, vineyards, and olive orchards.

" He doesn't want his wines to be thought of as Natural Wines because he doesn't want to be a part of a "movement", also because he feels that the natural wine movement is too excepting of flawed wines and that some "Natural" wines don't actually express terroir. "
Now there's a winemaker whose attitude I like! I'm going to look for his wines.