Monday we made the three hour drive up from Bio Bio to visit Gonzalez Bastias in the Maule valley.  We took our time and had some street food in the working city of Talca.  We ran into intense street demonstration between young women protesting for equal rights and saw them get confronted by riot police.  Chile is in an intersting situation right now.  They're still moving on from the rule of Augusto Pinochet (a brutal military dictator who ruled until 1990) and are about to vote on a new constitution.  The country has modernized quickly but it's happened at different speeds in different parts of the country.  There's intense inequality and a strong social movement has started to address that.  Overall it was a hot, intense, edgy day everywhere we went. 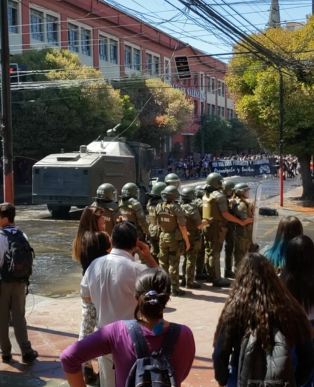 I decided to hop out and try to run the final 18K to the Gonzalez Bastias winery.  Let me tell you: that road is all hills!  It was about 90 degrees and there wasn't a cloud in the sky.  I made it 10K but the heat, steep hills, and the recent lunch I'd eaten all took a toll and I didn't run the final 8K. 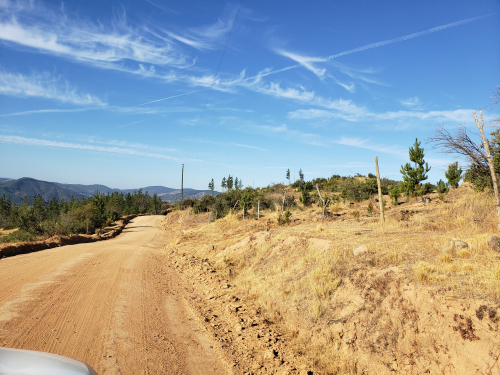 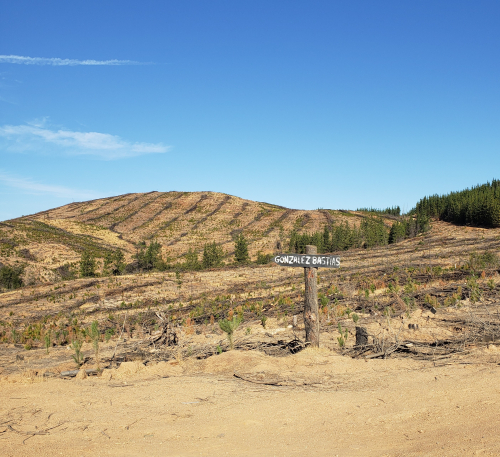 The landscape was beautiful, intense, and harsh.  Most of it was just totally empty and the dirt road was so rough we were worried our Citroen wouldn't even make it.  And then we dropped down out of the hills and drove through a beautiful gate made of thinly split logs.  we drove into this green oasis of verdant ancient Pais vines that looked like small trees and grew up to head height!  We walked into the covered but open air winery and were greeted by this towering guy in a suitably big straw hat who immediately poured us glasses of still fermenting grape juice and then got us cans of beer.  This was Jose Luiz.   He welcomed us and launched right in to talking about the wines he had fermenting, the empanadas we were going to have for dinner, and how much he loved this land! 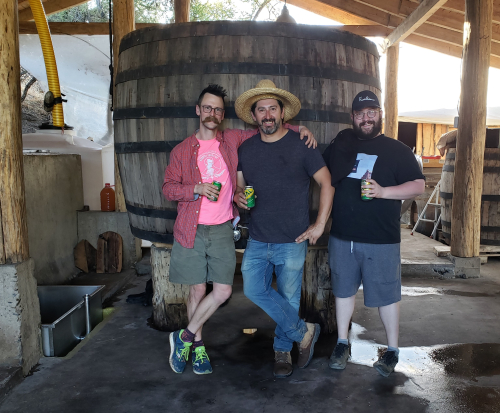 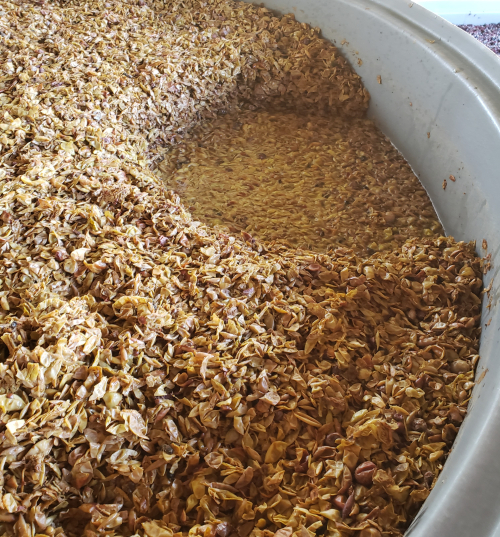 We walked into the vineyard with him and he took great pride in lifting up the dense leaf cover and showing us the massive trunks of the 200 year old vines and all the huge grape clusters that Pais is so good at producing.  He said he plowed the vineyards with his horses mid season and then used hoes to keep some of the other plants from growing in too much, but that he didn't spray anything at all because the Pais is so vigorous and that wine should be made in the vineyard.  He said that when he does prune he just leaves the cuttings where they fall to decompose. 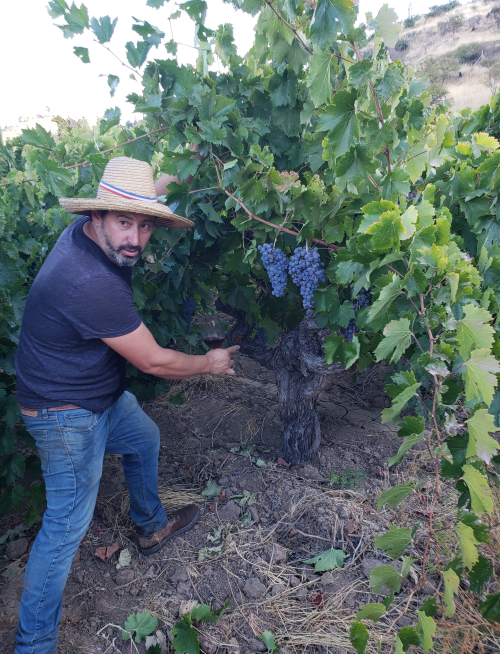 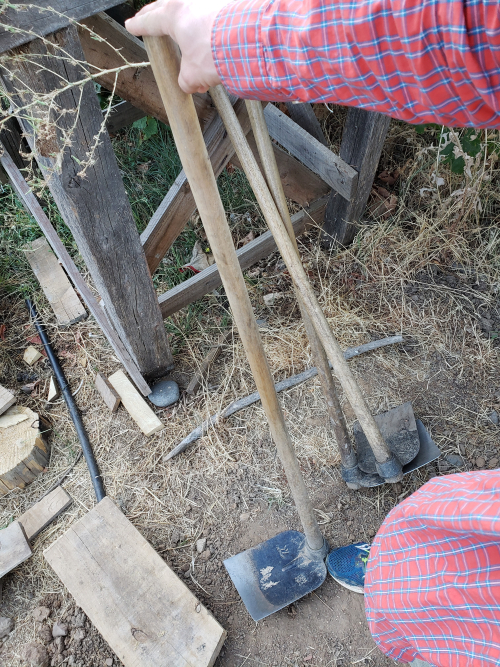 Jose Luiz said that the land owned him, not the other way around.  The idea of man owning land is crazy to him.  He had been born there, he said he would die there, and these 200 year old vines would keep producing amazing grapes.  The vines would not cry for him!  Matt said maybe the land would shed a little tear?  Jose Luiz said no, he had raised his kids well to continue maintaining this farm so that the land wouldn't miss him or cry at all. 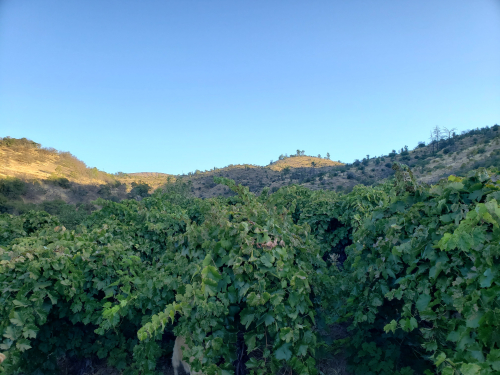 We sat around outside eating amazing pork terrine for dinner that he had made himself.  Although his heart was very much in his little farm he was very well traveled.  He said years ago he had tried a bottle of Italian wine that had blown his mind and so he had decided to travel to learn more about wine other places.  I assume that was part of why he started exporting his wines 7 years ago.  He had traveled extensively in Italy and we talked about our shared love of Sicily.  He had also visited places like the Jura in France and I'm sure that extra knowledge helped improve his wine. 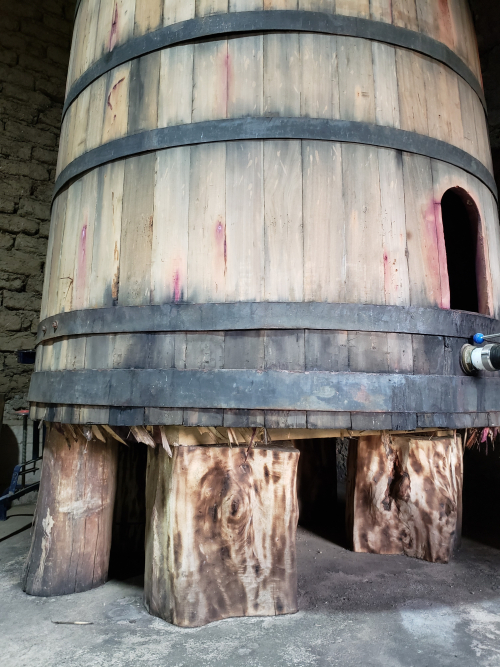 His wine making is very natural, but he has a lifetime of experience.  He uses open cement fermenters, huge old Chilean wood Rauli barrels, and some stainless steel.  We drank his current release wines but also a Naranja skin contact white from 2017 and a Matorral red from 2010.  The 2010 was great and very harmonious!  He echoed some of the things I've heard from other wine makers: he worries that people will associate "natural" wine with wines that are funky.  To him natural wine should just be delicious and honest and taste like the place it comes from.  Wines that are "funky" are generally just poorly made.  Yes, funky is a subjective word and give him a break because he doesn't speak English, but he has a point that there is a segment of the natural wine pantheon that includes wines that are flawed.  That's totally ok, but I think he was worried that "natural" wine would come to be defined as wine with flaws. 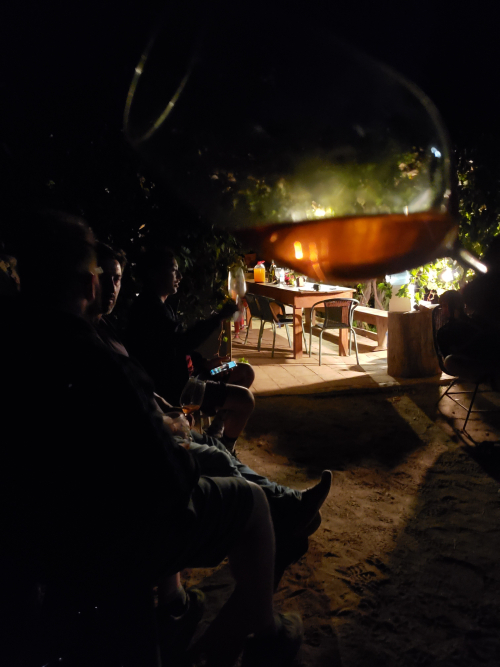 Then he showed us around the mud brick adobe house he had built him self.  I noticed a lot of interesting books like the I Ching and poetry from Gabriel Garcia Marquez kicking around, reinforcing the take away that he was more worldly and thoughtful that you would expect a guy who lives in such an incredibly remote place to be.  Jose Luiz was a super sweet joyful guy and his wines are fantastic.  I'm honored to work with them 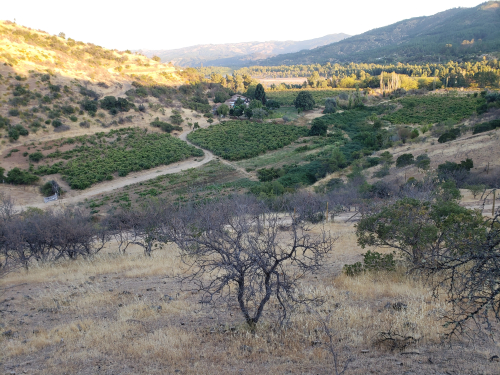 Here's the view from the "driveway" looking down at Jose Luiz's little world.  Those are all the vineyards of Gonzalez Bastias and the Maule river out beyond them.  If you zoom in you can see Jose Luiz walking down the drive way with his dogs.

Here's a video of a vineyard walk with Jose Luis