How Hard is Wine Making in Chile?

Saturday afternoon I went with part of Roberto's crew over to Santa Juana to harvest some plums and to move water in the vineyard.  I had no idea what that meant but I jumped at the chance to spend some time getting to know the group of young guys working for Roberto. 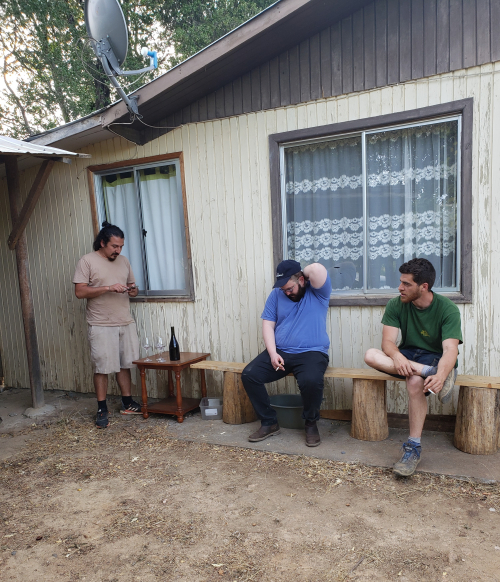 It was about a 45 minute drive and we listened to the most eclectic mix of Pablo Neruda set ro rock music, Chilean folk music, reggaeton, and Cumbia. It was not and the drive made us all drowsy so first thing when we got there was to mix some instant coffee.  Then I went and harvested plums with a couple of the guys and the others went to check out the water situation.
Santa Juana is where Roberto had made every vintage up until 2020 (4 vintages total).   It's beautiful peaceful little hidden valley with something like 3 ha of 200 hear old Pais vines but also lemon, apple, peach, plum, and fig trees.  There's a tiny ancient barn and half cellar where all the wine had been made. 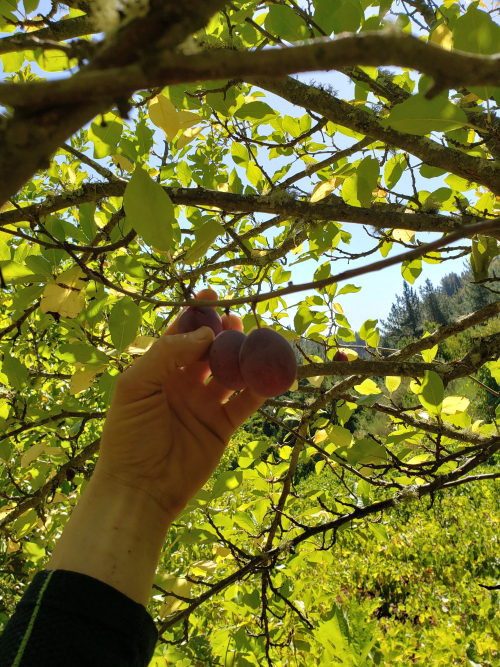 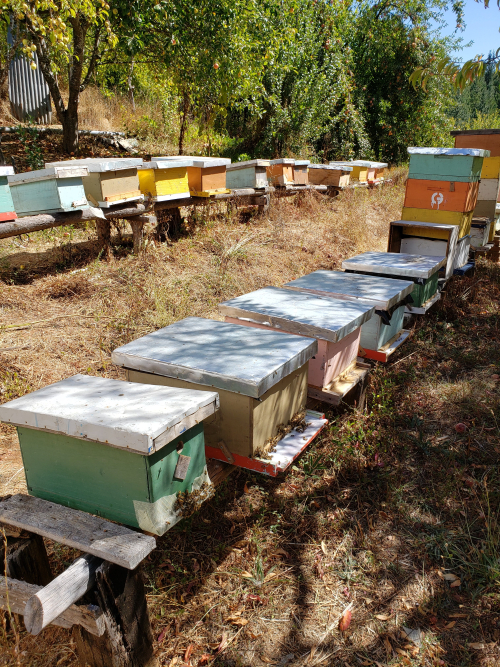 Roberto's bee hives
It was a hot summer afternoon but there was so much life: hawks cruising lazily over, bees, all kinds of fruits and vegetables growing everywhere, and a couple of Roberto's dogs hanging around.  After we had wandered about and picked all the plums we could reach (only one and a half trays) I decided to go see what the other guys were up to.  I good just see the edge of their truck way down in the bushes at the edge of the vineyard. 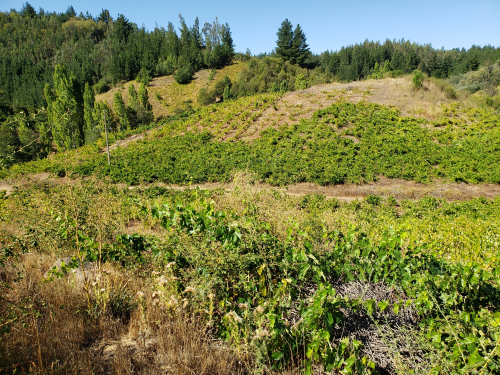 Here's a picture of the vineyard.  The dam was way up on the back side of that hill on the far left.
I walked down and they were lying in the shade with a hose stuck into a giant plastic tank in the truck bed.  We took a look and there was hardly any water. The hose had been run from some kind of water source, not a well they said, and they decided that we should go investigate.  Investigating turned out to be a 15 minute hike.
We climbed through two barbed wire fences, crossed two brooks on exceptionally sketchy plank bridges (the railing of one literally fell over when I looked at it), we hiked through the woods and then up every steep hill.  Finally we came to a tiny damn they had built across the creek with a pipe coming out of the bottom.  The idea was to build up a little natural reservoir they could tap by opening the valve on the far end of the hose way down hill.  Unfortunately there was pretty much no water in the dam.
So we hiked all the way back down.  It was decided we should drink a bottle of wine and ait in the shade while we waited for the tank to fill up a tiny bit more.  I decided to run hill repeats.  Finally we drove the truck up above the house and transfers the water into another plastic tank using a pump. This tank was plumbed to the winery for cleaning and watering the garden.
So 4 people spent an entire afternoon to get maybe 40 lbs of plums and 100 L of water.  It was so much work for so little.  I'll never take having water available in a winery for granted again, but it was a brilliant experience that demonstrated the difficulty of making wine in rural Chile but also the big hearted collaborative friendly spirit of the people.  The guys were so happy and friendly and were really enjoying them selves the whole time!

This has been a fascinating report of your trip to Chile, Ned. It helps take my mind off the gloomy news.