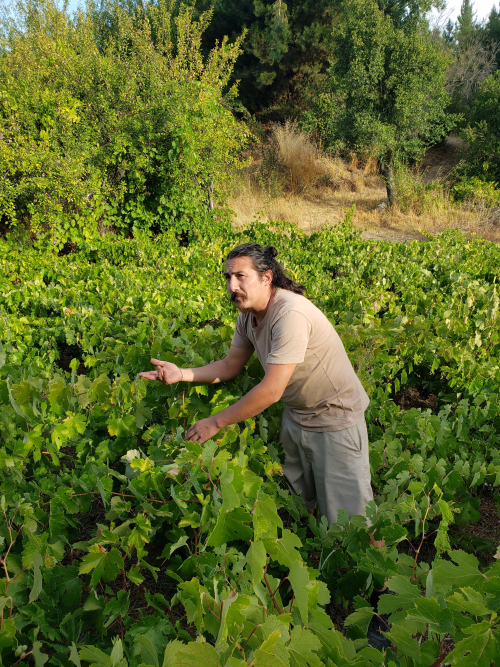 In early March 2020 I got to spend several days with Roberto Henriquez during harvest.

Roberto grew up in the area around Bio Bio and had the experience of making wine with his grandfather when he was younger but then went on to other things.  He's a pretty awesome drummer and has an album his band put out years ago.  After spending some time as a musician Roberto got into a university program studying Agronomy.  If I understood correctly, there aren't official wine making programs in Chile; you have to study Agronomy and it's considered engineering by the government and quite rigorous. So Roberto studied Agronomy and really dug into ecosystems and how grapes ripen differently on different vines and why.  It was a rigorous 4 year program and only 12 people out of his class graduated, but Roberto was one of those 12.

Chile has a complicated economy.  There are some really developed parts with services and manufacturing and great universities.  There are other parts where most people are subsistence farmers.  There's still a lot of extractive industry just producing and selling raw materials.  Down where Roberto is from the paper industry is the largest employer and seemed to be a majority of the economic activity.  Driving around there was just hill after hill of pine trees.  Everything had been clear cut and then planted with pine trees for the paper industry.  They get clear cut and the replanted periodically.  It's surreal and sort of soul crushing.  The pine trees are almost always there somewhere in your vision in uniform dark rows.  Back under the Pinochet regime the government gave subsidies to select rich families who bought land and then the Government planted trees which the landowners eventually sold and benefited from.  Sure, it created jobs, but those jobs are pretty dead end. 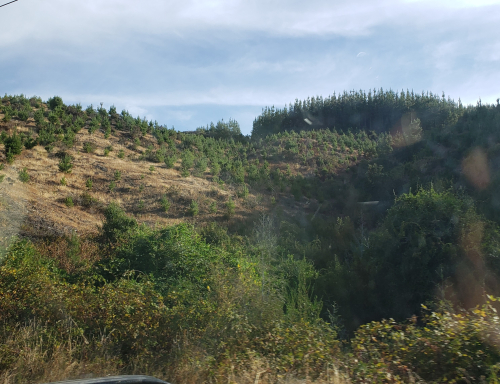 Here's a shot from Roberto's truck of a clear cut hillside with more pines in the back ground.

So Roberto grew up around it and rebelled against the whole structure.  There are 200 year old vines all over and people had made wine here for, well, at least 200 years.  The southern regions of Chile are regarded by the rest of the country as more rural and backwards and the people are more of indigenous decent so the more European northerners look down on them.  Wines from down here in Bio Bio, Itata, and Maule are very poorly regarded and the grapes are worth nothing, so many old vines have been ripped out to plant pine trees.  Or they don't even ripe the vines out, the just plant pine trees over them and crowd them out in the shade.  After working with Louis Antoine Luyt for a few years (but then feeling he had to work on his own and follow his own vision) and then working with Agnes and Rene Mosse in the Loire Roberto was confident that the vines and land of Bio Bio and Itata were special and could produce great wines. 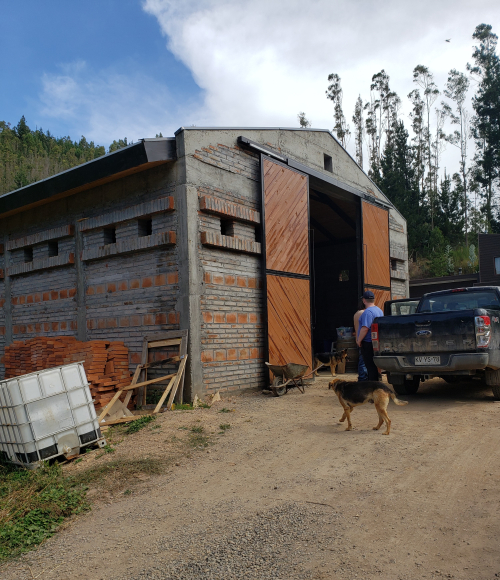 Here's Roberto's new winery.  He had just built it and it didn't actually have water or power yet.

I think his first real commercial vintage was 2016.  The first vintage I was able to get my hands was 2017.  He started out making wine on a little plot of 200 year old Pais vines in Santa Juana in Bio Bio and making wine in a traditional open topped concrete vat that honestly looks more like a concrete hot tub than anything else.  Three years ago he built a new house in Patagual.  This past year he built a new winery at his house in Patagual!  It's a huge game changer going from the tiny low barn built into a hill side to a building with a concrete floor to work on and just spray down!  A little aside, the driving here is insane.  There are so many rivers and so few bridges that it seemed like Roberto spent hours every day driving around from one place to another. 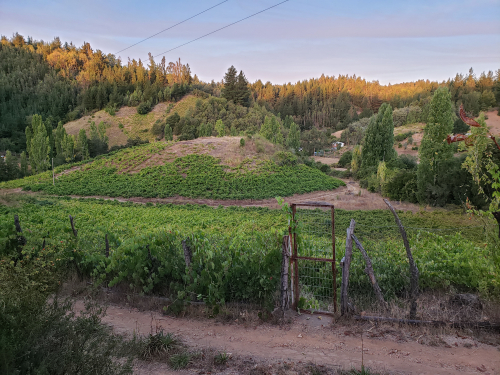 Here's the little vineyard in Santa Juana where Roberto started (and still does) make wine.  If I regularly spent time in a place like this I would be super calm and centered too!

Roberto is a thoughtful calm guy with infinite patience.  He had a great team made up of several agronomy students doing work study projects with him, a wine maker from Catalonia, a Journeyman winemaker named Paula, and a sommelier from Bogota Columbia.  Roberto gave them a ton of autonomy to figure a lot out on their own.  He was a much more relaxed lazare fair wine maker in how he supervised the people working for him than I'm used to.  That's not the whole story though.  Right from the beginning when I met him here in the US I could tell that he was motivated by a clear vision and that he was so passionate about it that he was that vision and the vision was him.  His vision is to have a critical mass of small farmers working together making wine from the traditional Pais vines down in Bio Bio and Itata and for that value added industry to help all the people there improve their lives.  It's his whole reason for being.

Roberto owns some vineyards and buys grapes from others.  Those he buys grapes from, he works in concert with the farmers to manage the vines year round.  He pays 3-4 times the market price for a kilo of grapes to ensure that they farm the way he wants and also because it's the right thing to do.  Large bulk wine producers may pay $1000 per 5000 kilos of grapes.  That just basically covers the pruning and cost of land for a farmer and leaves no actual profit.  Roberto hopes that if he proves wine making and exporting can work that other people will start making wine themselves too and then they'll slowly be able to push back against the paper industry and people will generally be more empowered economically to advocate for themselves and their communities.  It's a hard struggle.  Chile is a conservative agricultural culture.  The country is still emerging from the aftermath of the Pinochet military dictatorship and in the past 20 years they've experienced several crashes in the price of the raw materials that they export.  A lot of people are so used to the system being stacked against them that they're resistant to the idea of hope that it could change. Like many of the best wine makers Roberto blends tradition, intuition, and deep technical knowledge.  He ferments with out temperature control in a building that's pretty open to the environment.  He's got a thorough technical understanding of why happens during all the stages of fermentation and that allows him to play around and experiment with confidence.  He knows technically when things are going right and when the fermenting wine is stable and what environmental factors he can play around with to influence the wine without worrying he's going to mess it up.  In a more whimsical concept he puts rocks from the vineyard the grapes came from into the bottoms of the tanks that the wine ferments in.    He uses old tinaja (100 year old locally produced amphora, huge rauli (a local hard wood tree that is now rare because they were all logged) vats, and cement tanks.  Roberto hand harvests and sometimes uses a destemmer, sometimes presses by hand over a bamboo mat (zaranda). 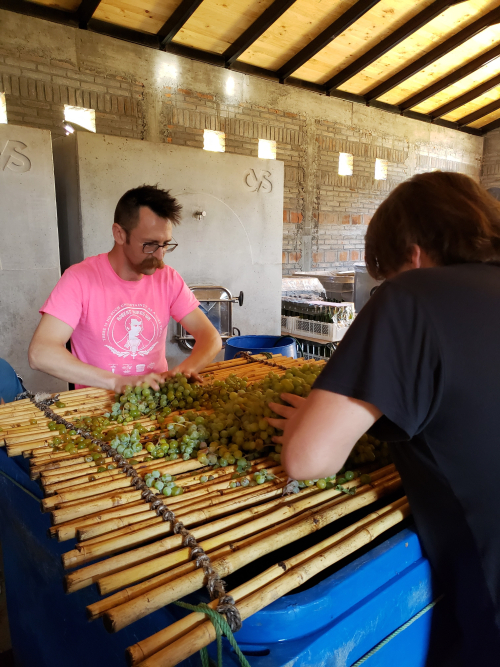 That's a zaranda that I'm working on.  You press grapes back and forth between two people and they slowly get pressed between the bamboo branches. 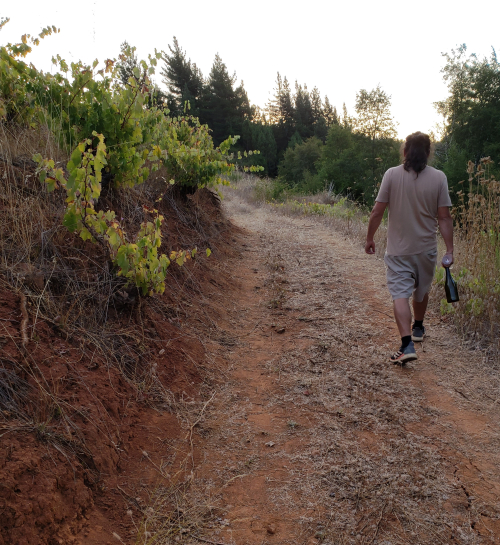 Pipeno is a traditional style of red wine from the Maule/Bio Bio/Itata regions.  There's no legal definition so everyone fights over what it is.  Here's a video of Roberto explaining what Pipeno means to him.